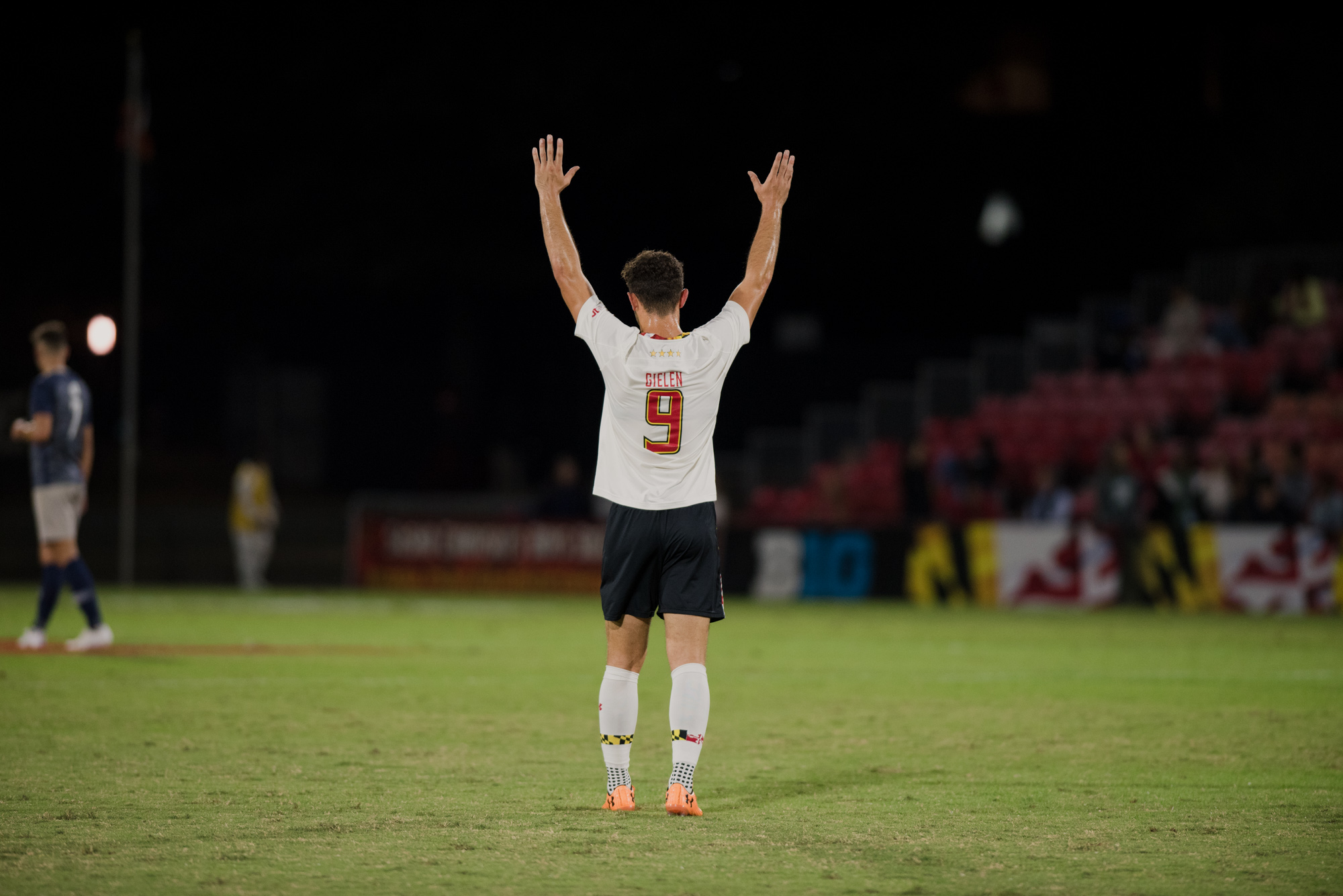 In recent training sessions, Maryland men’s soccer has emphasized executing in the final 25 yards of both ends of the field. Coach Sasho Cirovski calls it box defending and box attacking. One of the leading tactics the Terps employ for the latter is getting the ball wide and serving crosses into the 18-yard area, where Cirovski feels confident the forwards can make a play.

Justin Gielen has only bolstered that confidence in recent weeks, flashing his proficiency in the air to get on the end of crosses. Cirovski said the team needs to continue to give Gielen good chances to convert on headers, just as he’s done twice in the past five games with goals against Michigan State and Ohio State.

“Whenever we can get the ball in wide positions, we want to find a way to give him a chance,” Cirovski said. “It’s a matter of him making the correct run, and also the delivery’s got to be such that gives him a chance.”

Maryland has executed on both sides of those deliveries on Gielen’s two goals this season.

Against the Spartans, defender Johannes Bergmann served in a long free kick from just within midfield. Gielen timed his break on the ball and skied to match the header, leveling the game against Michigan State.

Then, in Friday’s 2-0 win over the Buckeyes, the sophomore started his run as soon as midfielder Eli Crognale received the ball at the edge of the box. Gielen got inside position on his defender and knocked the header in to get the Terps on the scoresheet.

“I always look for the header. I love getting on the end of crosses. I find that it’s a lot more about timing and effort than it is about luck,” Gielen said. “I feel like when the ball’s in the air, you can create your own opportunity.”

[Read more: For Maryland men’s soccer, anyone and everyone can score in big moments]

Gielen began the season as a reserve player, working his way up the ranks to become a regular starter. The Edgewater native has started the past seven games as a forward on the wing.

Early in the season, Gielen was using his vertical to find chances with his head, but narrowly whiffing on his shots. His confidence never wavered, though, and the team knew the forward was close to breaking through with his aerial acumen.

At nearby DeMatha High School in Hyattsville, Gielen starred on the soccer field. Across four seasons, Gielen scored 52 goals and dished out 22 assists. During his illustrious high school career, he was named the 2017 Washington Post All-Met Player of the Year and a United Soccer Coaches-Adidas High School All-American.

But during the soccer offseason, Gielen also played basketball at DeMatha. Gielen believes there’s some translation from grabbing rebounds to getting in the air for headers. Still, he’s convinced his proficiency is derived mostly from an attacking mentality.

“Subconsciously, there’s probably some things that carry over from basketball,” Gielen said. “But in total, I think it’s a lot more about me wanting to score goals, that’s my favorite thing to do.”

Cirovski wants to continue making strides in box attacking as the team prepares for its final two regular-season games before embarking on the postseason. With attacking options such as Gielen, Luke Brown, Malcolm Johnston and Eric Matzelevich, Cirovski believes there’s always potential for a score when a service is accurate.

“This is something that we have to keep working on and becoming more efficient in,” Cirovski said. “And today was a good start.”