For Maryland men’s soccer, anyone and everyone can score in big moments 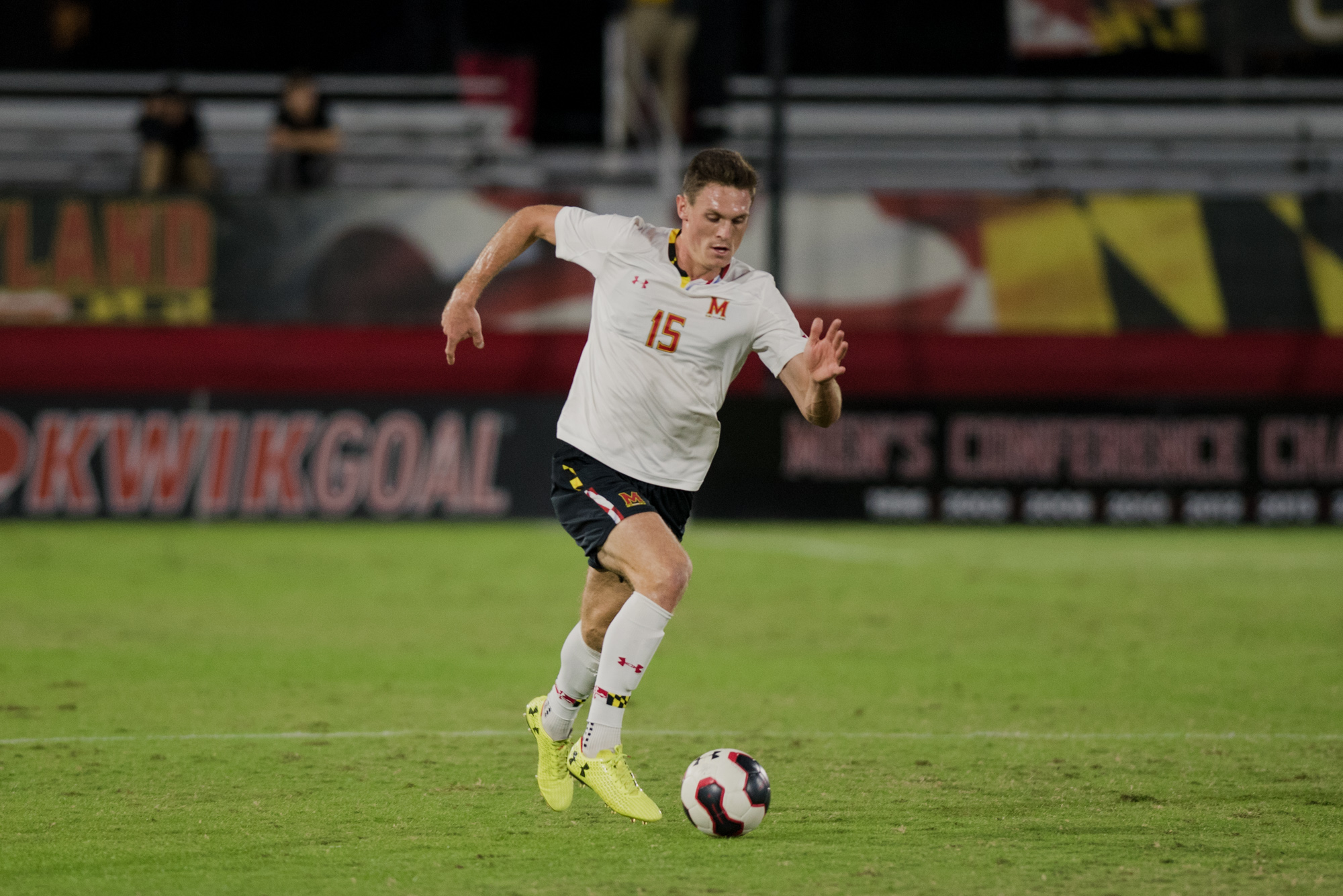 Forward Eric Matzelevich dribbles with the ball in Maryland men's soccer's 1-0 loss to No. 14 Georgetown on Oct. 14, 2019 at Ludwig Field. (Gabby Baniqued/The Diamondback)

Maryland men’s soccer defender Johannes Bergmann made a beeline toward the sideline after heading in the game-winning goal against No. 24 Yale to lift the Terps to a 1-0 overtime win on Monday night.

As the other Maryland players on the field chased Bergmann, the reserves mobbed the defender at the sideline to celebrate the result. Bergmann was an unlikely source of the game-winning goal with just one career goal before Monday night — which came three days prior.

Bergmann was just the latest in a trend of players stepping up in big moments to propel the Terps to victory. In the team’s eight wins this season, seven different players have netted the game-winning goal, showcasing an unpredictable attack with a multitude of scoring threats.

“We have a lot of players that fit the bill who are ready and able to pounce on any opportunity we have,” forward Justin Gielen said. “It’s much better to have a team that can score than a player that can score.”

During coach Sasho Cirovski’s long tenure in College Park, he’s had the luxury of coaching reliable goalscorers that have accounted for the vast majority of Marylands’ tallies. In nine of his 27 seasons at the helm, Cirovski’s teams had a player reach the 15-goal plateau, including Jason Garey, who surpassed the 20-goal mark in 2004 and 2005.

But in other years, the Terps have focused on simply creating dangerous chances, with multiple players getting on the end of them.

In Cirovski’s eyes, both styles can be conducive to success on the attacking end.

The veteran coach has seen this season’s attack closely resemble that of last year’s. In 2018, then-midfielder Amar Sejdic paced Maryland with eight goals. Meanwhile, 12 other players found the back of the net to supplement the team’s attack.

Even with Sejdic graduating, the Terps’ next two highest goalscorers, forward Paul Bin and midfielder William James Herve, returned this season. But Bin tore his ACL before the season even began, and Herve has played all of 19 minutes because of a nagging leg injury.

Those setbacks have only forced Cirovski’s group to strengthen the sum of its parts as it looks to maintain a threatening attack.

“With the injuries that we’ve taken this year, we have to rely on our depth,” Cirovski said. “Similar to late last year, we just needed to find goals from different places, whether it’s from our backs on set pieces, our midfielders coming through or our strikers getting on the end of things.”

Beginning with a road matchup against Ohio State on Friday night, Maryland has just three regular-season games remaining before embarking on the Big Ten tournament.

Last season in the conference tournament, forward Eric Matzelevich scored his second goal of the season to give the Terps a 1-0 win in the quarterfinal, and defender Ben Di Rosa scored his first career goal to propel Maryland to penalty kicks in the semifinal against Indiana.

Matzelevich, now a captain and the team’s leading scorer, said the depth of scoring options will be an asset to the team as the pressure heightens.

“It’s also good that we can have confidence for other people to score, and we’re not relying on one person,” Matzelevich said. “It also just gives people and the team more confidence.”

Unlikely heroes rose to the occasion immediately this season, with freshman midfielder Malcolm Johnston knocking in the game-winning goal in the season opener.

Since then, defenders such as Ben Di Rosa, Bergmann and Brett St. Martin chipped in on the attack during crunchtime, along with more attack-focused options such as Matzelevich and midfielders Eli Crognale and David Kovacic.

Cirovski may not know who’s going to provide the next big moment, but he remains confident his team will continue to find a way to put the ball in the back of the net.

”We’re not sure where the goals will come from,” Cirovski said, “but we know that they’re coming.”