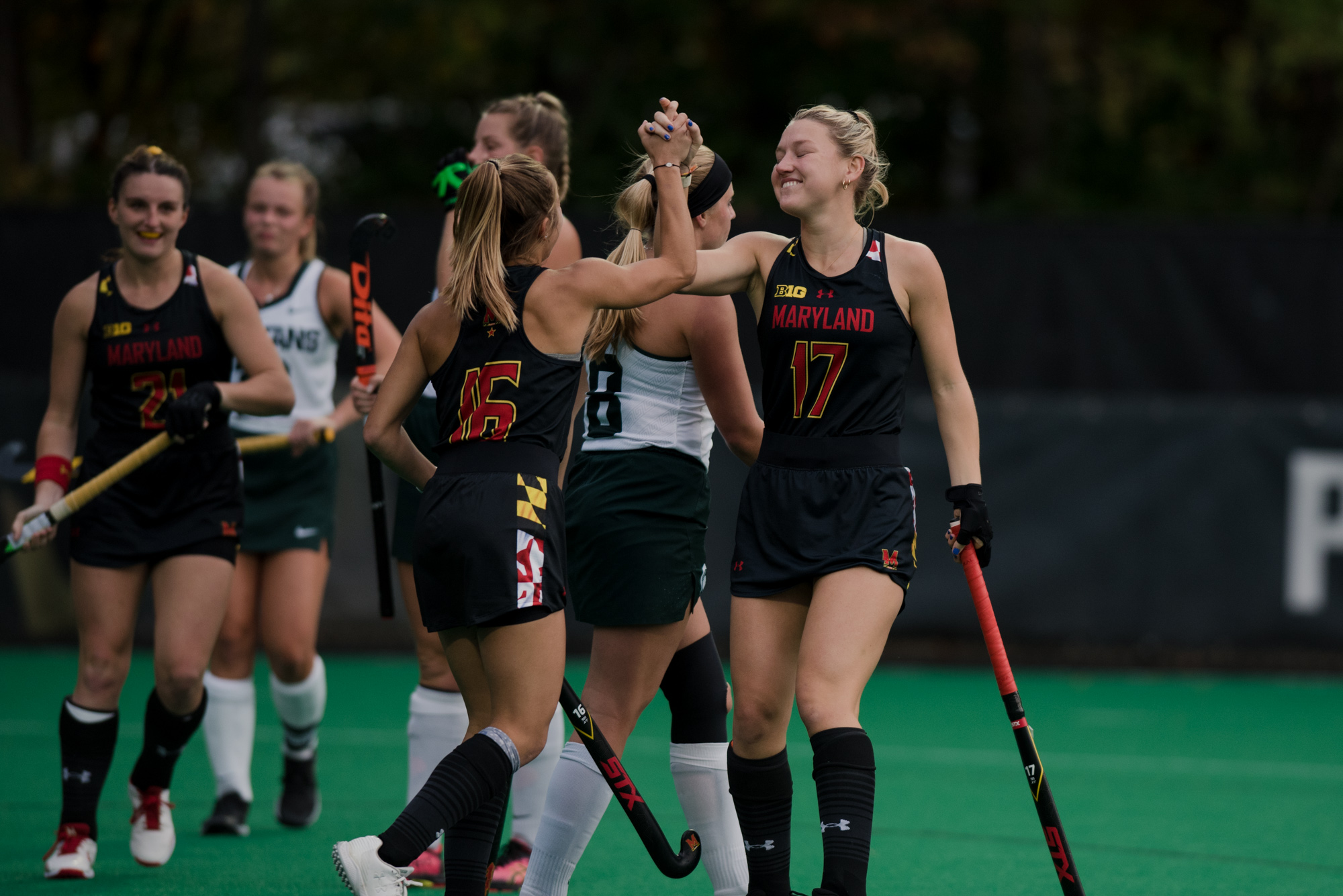 When Maryland field hockey stepped out for its game against Michigan State, Emma DeBerdine strutted around the middle of the park, eventually slotting into the midfield and scoring from there in the second period.

Joining her in the midfield was Kelee Lepage — a player who spent much of her first three seasons as a key cog in the Terps’ defensive unit.

And 25 yards in front of the pair stood Madison Maguire, a midfielder by trade who coach Missy Meharg moved up the pitch before the season to increase Maryland’s scoring output.

The trio is part of the bevy of changes Meharg has made to the lineup, pushing players to show off their versatility and fill in positions that may not be natural to them. And with postseason play on the horizon, the Terps hope an emphasis on getting the most out of its multifaceted weapons continues to pay dividends.

“Our flexibility to play a lot of different positions [is impressive],” Meharg said. “We’ve got lots of players that can play a variety [of positions].”

Heading into the season, Meharg was excited by Maryland’s depth, with a sizeable number of returning starters complemented by a strong freshman class.

With such a talent-laden squad, though, difficulties arose in getting each player enough minutes.

“We’re about 14, 15 players deep in talent, and that’s a luxury to be in,” Meharg said earlier in the season. “One of the conflicts with it is players not knowing what their role is.”

So, as the season progressed, Meharg experimented with her lineups, moving a number of players around the pitch in an effort to get the squad playing more synchronous hockey.

Newcomers such as Linda Cobano and Belle Bressler saw increased minutes as they filled the Terps’ needs in midfield and defense, respectively.

Cobano, initially a more defensive-minded midfielder, pushed forward, taking on increased offensive responsibility in the attacking midfield position, Meharg said. The change has worked, with Cobano racking up nine goals this season — good for second on the team.

“I’ve always been a player who was not bound to one position,” Cobano said earlier this season. “[I’ve always] stayed flexible — enhancing my offensive skills but also training my defensive skills to be an all-around player.”

Bressler’s skillset has proven a valuable commodity to the squad as well, possessing enough tactical acumen to slot in both the midfield and defense.

And even as Maryland has established itself as a force in the Big Ten — already clinching at least a share of the conference regular-season crown with their victory against the Spartans on Friday — it’s finding new ways to change the lineup.

Take DeBerdine, the versatile freshman who has been omnipresent in the lineup since she arrived in College Park. After spending the first 15 games of the season playing in the forward line, Meharg dropped her into the midfield after the Terps’ loss to Michigan on Oct. 18.

DeBerdine has impressed in her new stead, helping link the play between the backline and the front three. Unsurprisingly, Meharg’s squad has combined to score 11 goals since DeBerdine joined the midfield trio — three coming from the Millersville, Pennsylvania, native.

“This is the first time I’ve played in the midfield this season,” DeBerdine said Oct. 20, “[but] it feels good.”

With flexibility throughout the squad to bolster it, Maryland is poised to be a difficult matchup in the postseason.

And with the Terps set to take on American on Tuesday, fans should expect a slew of positional alterations, with Meharg looking to keep opponents guessing as her squad prepares for the heightened intensity of play in November.