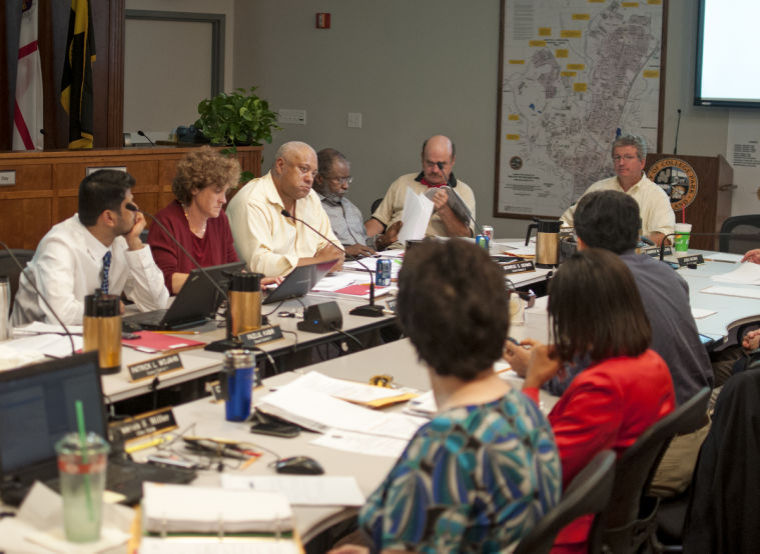 The College Park City Council in a meeting.

Though it may seem odd to think about college students running in municipal elections, it’s certainly plausible when there are cities where a dog is mayor. And while students serving as local representatives may call to mind something like the Ice Clown disaster of Parks and Recreation, in which an 18-year-old is elected mayor and sends the town into massive debt for a winter sports complex, University of Maryland students have been running for office for years — and should continue.

In 1993, Dana Loewenstein and Michael Moore were the first students to run for positions on the College Park City Council. Though both students lost to incumbents, Loewenstein and Moore did not go down without setting a powerful precedent — and enduring accusations of voter fraud. And in 2001, student candidate Mike Mann ran for the council after working for Bill Clinton and maintaining quite a nice website for the time, though he failed to win the election.

But most notably, in 2009, Marcus Afzali beat the incumbent to become the first student to win a College Park City Council seat. Afzali was just a 24-year-old doctoral student when he won. But despite Afzali showing that students are clearly capable of serving the city, just a handful of students have run since.

One might assume student involvement has declined, but this would be untrue. Students are massively politically involved, with groups dedicated to national politicians such as Donald Trump, Bernie Sanders and Elizabeth Warren, and students also running a fair portion of newcomer McKayla Wilkes’ grassroots congressional campaign. They’ve also maintained organizations such as this university’s College Democrats and College Republicans, and Students for Justice in Palestine at the University of Maryland. Commitment to political action is not lacking on this campus.

Moreover, with the recent upset when the council voted to pass new ordinances restricting “unruly social gatherings,” it seems clear that council members do not put student voices on par with those of more elderly neighbors. Despite both a hearty student turnout and several strongly-worded letters written by previous student leadership, the ordinance unanimously passed. When a vote is unanimous despite clear protests from a certain demographic, it becomes evident which voices are not being equally represented. Students are a significant part of this city, and their opposition to this motion wasn’t reflected at all in voting.

Though the council made and passed amendments to the ordinance — written in collaboration with student feedback in the spirit of fairness — the changes were not enough. The new ordinance still hinders student activity at safe gatherings and leaves too much of its defining authority as to what actually is an “unruly social gathering” in the hands of those with prejudices against students or other groups.

Students are already politically active, both on the campus and in the community, and it is time they put their work back into the city they live in, however briefly it may be. Four years should be enough time to make substantive municipal change. Despite being young and less experienced, students should run for city council again in the name of equal representation in a college city.

CORRECTION: Due to a columnist error, a previous version of this column stated that no students have run for the College Park City Council since Marcus Afzali in 2009. There have been several. This column has been updated.