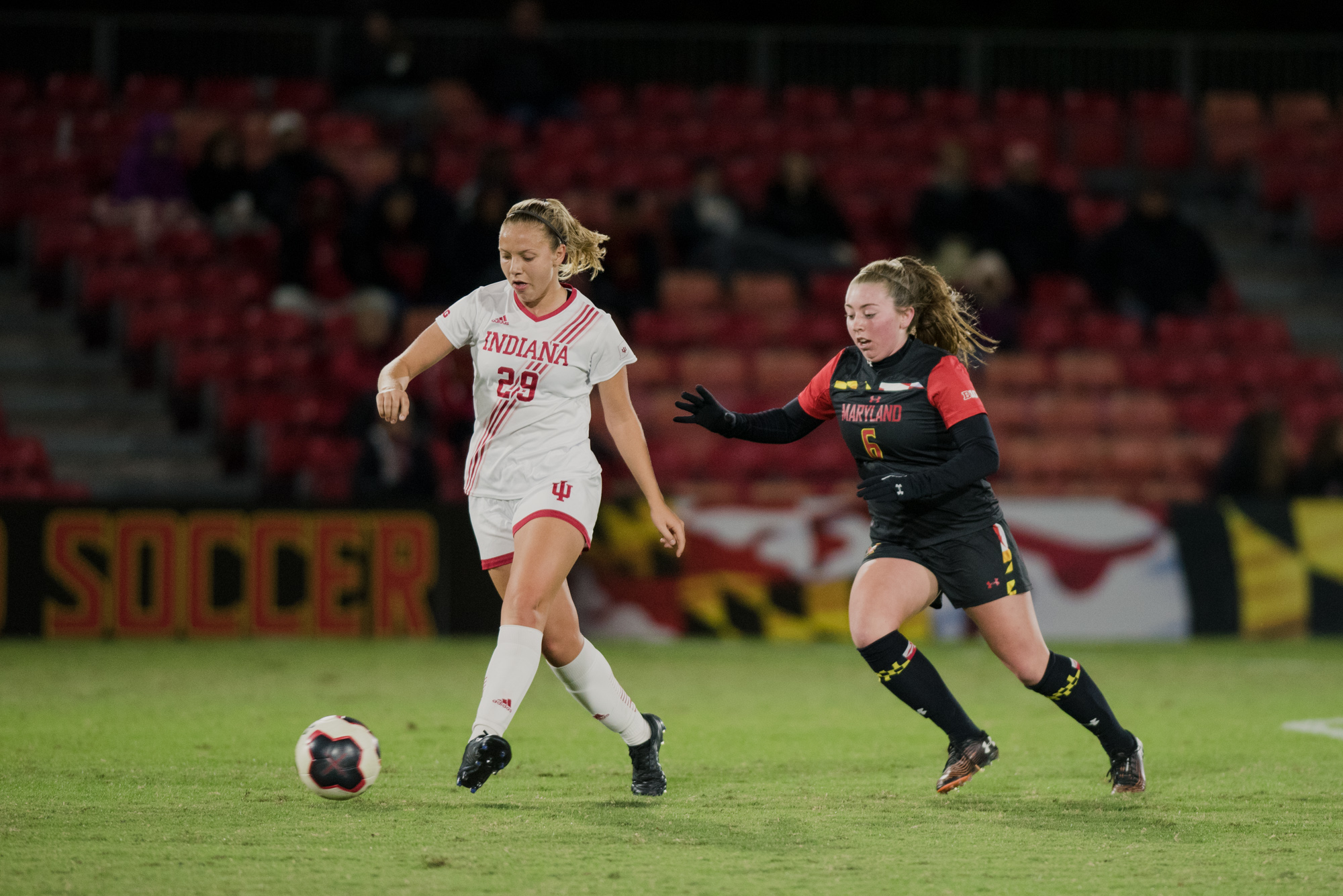 Forward Kaylee Kozlowski chases down the ball in Maryland women's soccer's 0-0 draw with Indiana on Oct. 17, 2019 at Ludwig Field.

Maryland women’s soccer defender Adalee Broadbent positioned herself squarely in front of Michigan midfielder Sarah Stratigakis, who threatened to add to her team’s lead with the ball in the penalty box.

Stratigakis was up for the challenge. She deked with her feet and cut left, throwing Broadbent off balance before smashing the ball home, curling the shot around Erin Seppi in the second half of the Terps’ regular-season finale Sunday.

Stratigakis’ goal put the final touches on No. 16 Michigan’s dominant 4-1 victory over Maryland, as the Terps conceded four or more goals for the fourth time this season.

Maryland was coming off a 1–0 victory over Michigan State to clinch its first Big Ten tournament berth in school history. Michigan entered the match reeling from a 1-0 loss to Rutgers, hurting its chances at securing a top-two seed in the conference tournament

The Terps were on the back foot early on, conceding in the 10th minute. A well-placed through ball got behind their backline for midfielder Nicki Hernandez to pick up and fire past Seppi.

Eight minutes later, Maryland conceded its second goal of the match. A failed clearance gave up possession in the Terps’ own half, and the Wolverines moved players into the box to set up a clear shot for midfielder Brooke Cilley.

Chances for Maryland were hard to come by in the first half. The Terps were unable to register a shot in the opening half of play, exhausting most of their squad in defense.

They broke the drought with an early shot to open the second half. Forward Kaylee Kozlowski found space from just past midfield to rocket a shot at goal. But Michigan shot-stopper Hillary Beall was equal to it, catching the ball and stifling the Terps’ first real chance of the game.

In the 67th minute, everything broke down for Maryland, as it surrendered an own goal followed quickly by the fourth goal courtesy of Stratigakis.

Freshman Mia Isaac found a consolation tally for the Terps in the 84th minute, finishing her shot in the bottom left corner. A free kick in Wolverines territory allowed the squad to move forward and get on the board.

The matched ended with an uninspiring 4-1 scoreline for Maryland, and it won’t be the last time the two squads meet this season. The Terps will make their Big Ten tournament debut next Sunday against none other than Michigan.