This math lecturer wants to keep bicycles off UMD sidewalks 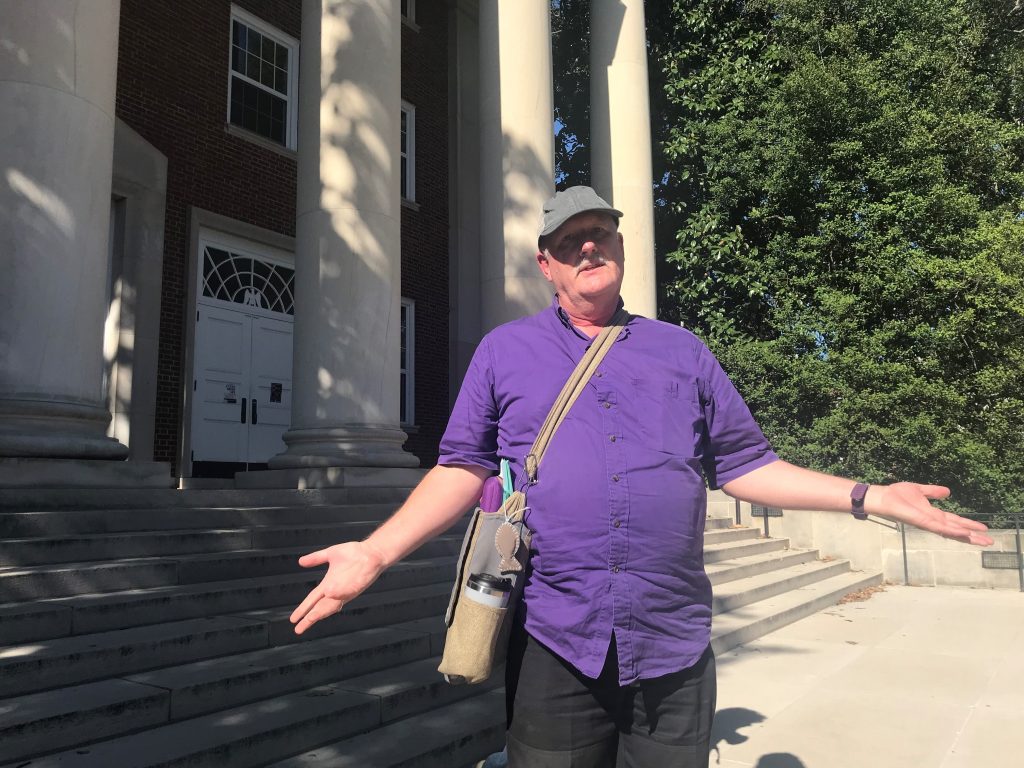 By Colleen Neely
For The Diamondback

Most days of the week, it’s easy to find Timothy Pilachowski. For the past five or six years, the senior math lecturer’s familiar refrain has been audible throughout the area around near Kirwan Hall, telling bicyclists to stay off campus sidewalks.

“Please protect pedestrians by following campus bicycle regulations, which clearly state that you should never ride on the sidewalk,” Pilachowski likes to say.

But with a recent change the Department of Transportation Services made in campus bike guidelines, Pilachowski said he will need to change his message.

Earlier this month, DOTS amended its guidelines to read that while cyclists are encouraged to ride in the street, they are permitted to ride on the sidewalks as long as they yield to pedestrians and dismount the bicycle to walk in crowded areas. Previously, the guidelines prohibited riding on campus sidewalks.

Now, Pilachowski said he feels limited in what he can say. Though he plans to continue protesting those who ride bikes on sidewalks, he’s amended his original statement to tell cyclists to “please be careful when you’re riding past pedestrians.”

Pilachowski said he has tried to work with the university to make it aware of the problems pedestrians face and recently met with DOTS director David Allen to discuss the issue.

During that meeting, Pilachowski said Allen was mostly concerned about Pilachowski’s activism and “strongly discouraged” him from continuing his request that cyclists refrain from riding bikes on campus sidewalks.

A university spokesperson sent a statement from DOTS that confirmed the meeting and said the department is “committed to creating a safe, inclusive and secure campus for students, faculty, staff and guests.”

“Bicyclists and e-scooter riders are encouraged to always wear a helmet and to travel via roadways, but should utilize sidewalks in scenarios they feel is best for their safety, including high traffic times and hazardous weather,” the statement read. “DOTS will continue to monitor best practices to align with the university’s ever-changed community.”

Pilachowski called the change “a recipe for disaster.”

While Pilachowski said he estimates between 80 and 85 percent of campus cyclists ride safely, it wouldn’t surprise him if someone sustains a major injury by riding on the sidewalk.

“There’s always that remaining percentage who are on the sidewalks when it’s crowded and weaving in and out of pedestrians and giving no warning,” he said.

Pilachowski’s activism on campus started with his own experience of nearly being hit by a cyclist who he said was weaving through pedestrians. When he got to his lecture a few minutes later, he told his students about the incident — and he said there was a chorus of responses from those who had similar experiences.

During his next lecture, he said he asked for a show of hands of how many people have had a bicycle come within two inches of them while walking on a sidewalk. Nearly 80 percent of the class raised their hands, Pilachowski said.

“And that’s when I began to think, ‘Oh, this is more of an issue than, you know, it’s not just me,’” he said. “So I looked up the university’s bicycle regulations and saw where it said sidewalks are for pedestrians, and [I] began saying something to students.”

Encounters with Pilachowski are often shared on this university’s subreddit, with dozens of students documenting their experiences. Many of the cyclists posting on the subreddit say riding in the street is dangerous because cars don’t treat them as they should, tailing them closely. Others say that riding on sidewalks is faster.

Neither reason is compelling enough to sway Pilachowski.

“By making the choice to ride on the sidewalk, you are inflicting the same fear on pedestrians that you say you have from drivers,” he said. “Being late for class does not give you the right to put other people at risk.”

Nathan Sears, a sophomore computer science and mathematics major, said he rides his bike on campus sidewalks if it’s faster. He said Pilachowski asked him to stop riding on sidewalks on one occasion. While Sears said it’s “reasonable” for Pilachowski to request that cyclists stop riding bikes on sidewalks, he knows the comment will not affect his habits.

Sophomore Breanna Gary, a biology major, said she had a recent incident with a cyclist on a sidewalk.

Gary said she was walking on a sidewalk near South Campus Commons when a cyclist turned a corner and had to swerve into a fence to avoid hitting her. The cyclist had several gashes, and his bike seemed to be broken.

Though she’s glad she wasn’t injured, she said it could have been worse. And this wasn’t the first “close call” she’s had with nearly being hit by a cyclist.

“If [cyclists] want to ride that bike, you know, it should definitely be on the street where they’re not putting anyone at risk,” Gary said.

Hearing from students like Gary is one of the reasons why Pilachowski said he has continued his activism over the years.

“I’d like to think that I’ve prevented some injuries,” he said.

Pilachowski said he’s well aware of the reputation he has created for himself, but he doesn’t think much about the criticism he receives online.

“I’m glad [they] find this very amusing, but I’ll tell you that my students who have gotten hit don’t find it amusing,” he said.