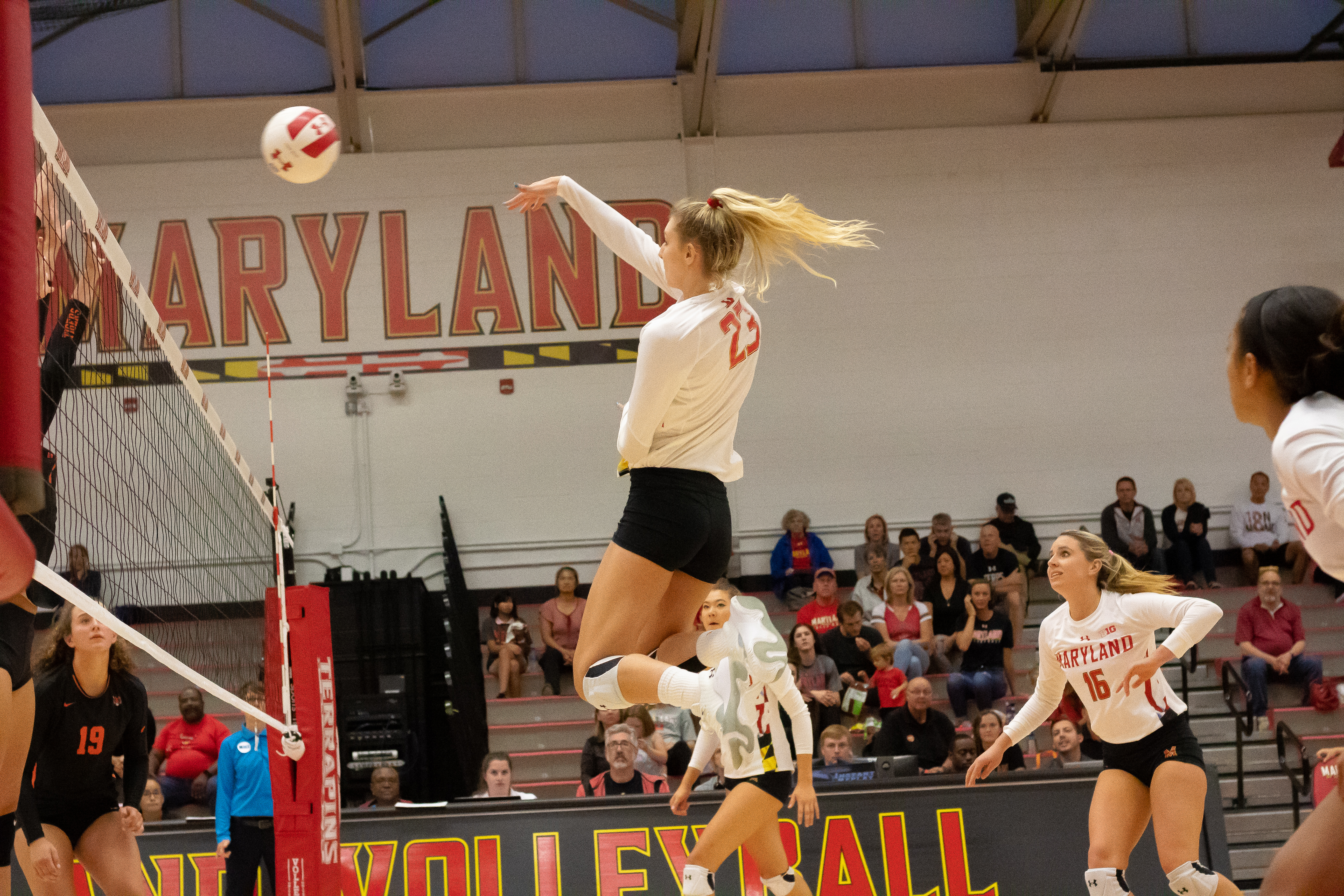 With Maryland volleyball up four points in the fifth set, middle blocker Katie Myers and outside hitter Erika Pritchard jumped on the outside to execute a picture-perfect block. The stuff put the Terps up 12-7, and it launched them on a 4-0 scoring run to close the final frame.

Maryland’s net presence was a strong point throughout its contest against Northwestern, finishing with 12 total blocks over the course of five sets. Myers led the blocking effort, coming into the match leading the Big Ten in that category and again asserting her dominance.

“It’s tough when you go on the road like that,” coach Adam Hughes said. “I think we could have been a little more consistent.”

Early in the match, Maryland made no improvements in its service game after struggling in that facet Saturday against No. 5 Nebraska. In the first set against Northwestern, the Terps’ defense couldn’t handle three serves.

“We both missed serves because we both have a pretty aggressive game plan,” Hughes said. “I do think we’re becoming more composed since we didn’t panic after those errors.”

After falling behind 21-14 in the first set, Hughes’ squad came roaring back to make it 22-20. However, defensive specialist Samantha Burgio’s third service error of the season put an end to Maryland’s run and shifted momentum back to the Wildcats, and they took the set, 25-22.

Maryland was able to flip the script in set two. The Terps added just one service error to their total, and Burgio notched an ace to open the set.

After starting off hot in the first set, Pritchard was quiet in set two. She finished off the set with two straight kills, though, pushing her team to a 25-22 set win.

“I felt really good, and I felt in rhythm the whole time,” Pritchard said. “I just wanted to play my game and take high, aggressive swings.”

Pritchard continued to dominate into the third set, along with her co-captain Myers. The duo combined for 11 kills in set three, and Myers demonstrated why she is second in the Big Ten in hitting percentage. By the end of the third set, the redshirt sophomore from Westerville, Ohio, was hitting .667.

The Terps blew past the Wildcats in the third set, hitting at a .379 clip while Northwestern managed to attack at just .097.

All of Maryland’s mojo disappeared in the fourth, however, and Pritchard and Myers were seemingly nonexistent. While the duo was dominant in set three, they combined for just two kills, and the Terps couldn’t get anything going. Northwestern ended up winning its fourth set of the Big Ten season to send the match the distance.

But in the end, Maryland was able to take control in the fifth set, and Hughes’ squad moved to 3-1 in five-set matches in Big Ten play.

“Overall, I’m happy to get a road win,” Hughes said. “In the Big Ten, you need to crawl and scrap to get anything you can, but I don’t think we played up to our standard.”