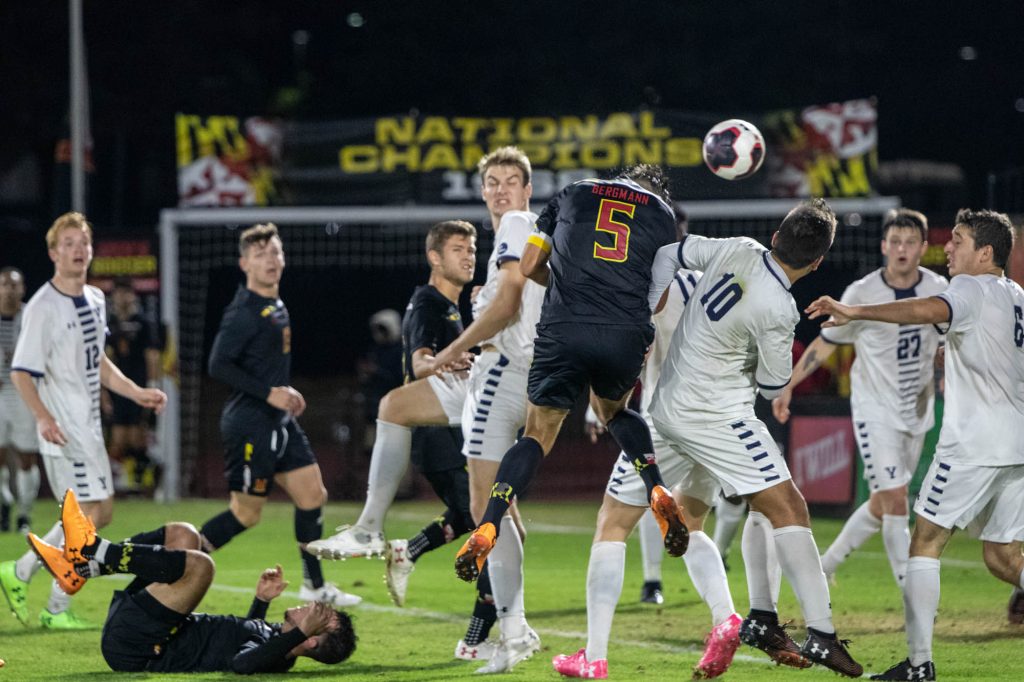 With the clock running down on an uneventful overtime session, forward Justin Gielen nearly had a chance to end the game. Instead, a Yale defender deflected the cross past the endline.

Midfielder Eli Crognale sprinted to the corner to take the set piece as time rapidly ticked under one minute. He floated his cross toward the back post, where defender Johannes Bergmann patiently waited out his chance to spring into the air for a header.

For the second consecutive game, Bergmann was on the receiving end of a Crognale pass and headed the cross into the back of the net. This time, it was a finish in the 100th minute that gave the No. 25 Terps a 1-0 victory over No. 24 Yale on Monday night at Ludwig Field.

“Niklas [Neumann] didn’t really have to make many big saves, but we didn’t really test their keeper that much either,” coach Sasho Cirovski said. “It had the makings of a tie. And yet I thought we pushed the game with a team that was pushing for a win, and we rightfully got it.”

For much of the 99 minutes that preceded Bergmann’s heroics, the two teams grinded out few meaningful chances in their respective attacking thirds.

Yale began the game on the front foot and generated a threatening chance in the fourth minute. Forward Eric Lagos skied to direct a header toward Maryland’s goal before Neumann got a touch to deflect it off the crossbar and straight down, causing the officials to consult video replay to confirm the ball hadn’t crossed the goal line.

For as dynamic as the Terps’ attack looked in Friday night’s first half against Indiana, it was anything but in Monday’s match. When the attack did manage to get into the final third, Maryland couldn’t put together the final pass or final touch to produce any meaningful chances.

Following a taxing 3-0 win over Hoosiers on Friday night, Cirovski was worried about his team’s energy that he said was rightfully lacking after the short recovery period.

So, with the Terps fatigued and the Bulldogs holding firm, their mindset switched to grinding out the game and finding a way.

“Once there’s a physical game against a good opponent, you try to dig deep and try to get the result,” defender Matt Di Rosa said. “Sometimes, it’ll be frustrating you can’t keep the ball, tired legs, but [we] try to dig deep and play with a lot of heart.”

Beyond that mindset, the Terps also returned for the second half with a different alignment, lining up in a 3-5-2 formation to bring more people forward on the attack with just three backline defenders.

Maryland employed the same formation after it lost 3-1 to Northwestern and injuries to attacking players continued to mount. Ultimately, though, the Terps reverted back to their usual 4-3-3 alignment.

But on Monday, bringing more players forward paid dividends for the home side, as Maryland began to generate chances.

“I thought the 3-5-2 really helped us,” Cirovski said. “I thought we took over the game a little bit.”

In the 51st minute, forward Eric Matzelevich sent a cross to a wide-open Crognale, who was playing further up the field in the second half.

The senior had time and space to take a touch and slot a shot from seven yards out, but instead opted to try to finish with a volley. After he mishit his attempt, a dejected Crognale remained lying on the field.

Late in overtime, Crognale atoned for his misfire with his cross on the corner kick.

Among a crowd of three defenders, Bergmann won the aerial battle and knocked in the game-winner.

On Friday night, after Bergmann scored his first career goal, Cirovski said he was surprised the score came on a header — a skill that the senior didn’t have at his disposal early in his career. But Bergmann said he’s worked on that phase of his game.

Bergmann’s heightened aerial acumen has given Crognale more confidence to pick out the defender at the back post, just as he did Monday night to hand Yale its first loss of the season.

“In this moment, I kinda felt that he’s going to serve a long ball [to] the back post,” Bergmann said. “I just started running, like I always do, and it was the perfect cross. And, yeah, it was a good header and it went in.”