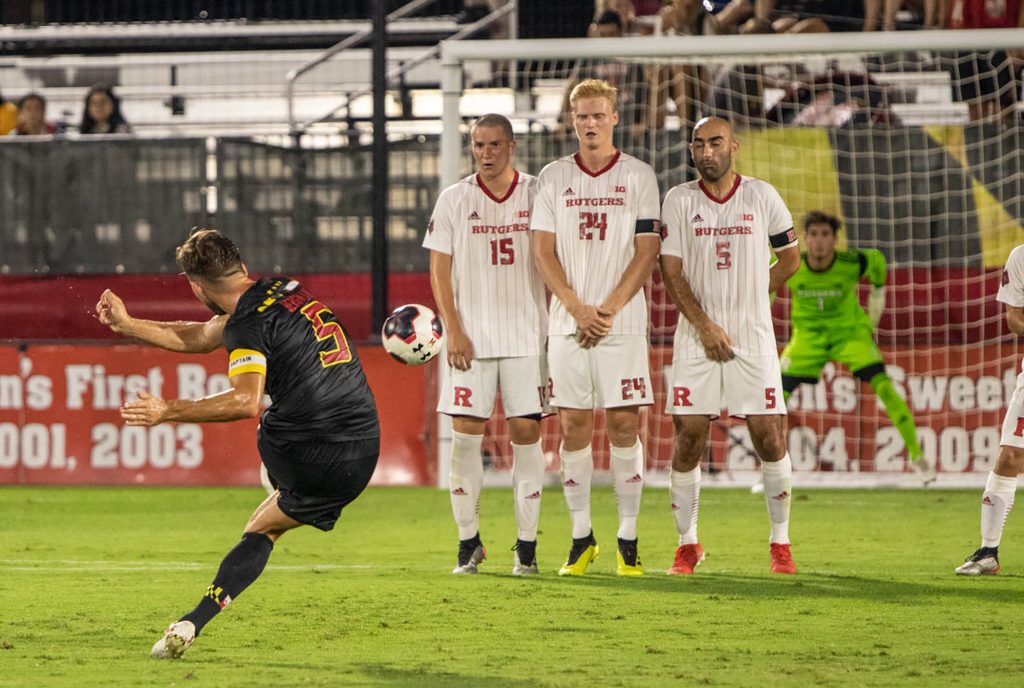 And after Crognale received a return pass and sent a cross deep in the Hoosiers’ box, Bergmann charged and met the ball with his head, thumping home the Terps’ third and final goal in Friday night’s upset win. Crognale hugged Bergmann, but the 6-foot-1 defender quickly detached from his teammates and scanned the crowd. He had other plans for how to celebrate his first career goal.

Bergmann was searching for his parents, who had made the trip from Germany to watch their son play for the first time in his college career. After seeing the Terps fall to Georgetown on Monday night, they were there to witness Bergmann’s first score. Once the senior found them in the stands, he pointed to both and gave an emphatic fist pump.

“It took me a while. They were hiding a little bit,” Bergmann said. “Eventually, I found them.”

As a defender, Bergmann’s chances to score aren’t as plentiful as his counterparts higher up the pitch. Most of his chances at goal come on set pieces, both as a player in the box trying to make a play or as a left-footed specialist tasked with taking the free kick.

Earlier this season, against Villanova, the 25-year-old senior had the best scoring chance of his career. The Terps were awarded a penalty shot because of a Wildcats foul committed inside the box.

Coach Sasho Cirovski sent Bergmann to the spot to attempt the shot, but the goalkeeper guessed the right way, made the save and kept Bergmann off the scoresheet.

Bergmann has also seen a shot inside the 6-yard box go off the post against Virginia this season. On Friday night, though, he would not be denied in front of his parents. He sought out the cross and made no mistake on the header.

“It feels unbelievable, especially tonight,” Bergmann said. “Goals are always nice, but especially [because] it was my first goal here at Maryland.”

The journey to his first goal in the United States began in April 2017, when Bergmann enlisted the help of the college recruiting agency Athletes USA, which connects colleges with international athletes.

Just three weeks later, Bergmann committed to play for Cirovski’s program. And upon arriving, he immediately made an impact.

He began his career as a sophomore due to professionalism rules, having played three seasons for a German association club. In that first season with the Terps, Bergmann started 17 games on the backline and won Big Ten Co-Defensive Player of the Week less than a month into the season.

In his second season in College Park, Bergmann and fellow center back Donovan Pines comprised an imposing pair in the center of a defense that posted five shutouts in the NCAA tournament on its way to claiming the national title.

Now as a senior, Bergmann has embraced a leadership role and serves as one of the team captains.

“We couldn’t be more proud of him,” fellow captain Eric Matzelevich said. “It’s just so rewarding to see him get a goal, and [it’s] magical in front of his parents.”

Cirovski remembers his trip to Germany to meet Bergmann and his family during the recruiting process. He said he knew then what a great young man Bergmann was, and what a great family he came from.

When the Maryland coach saw the senior finally breakthrough with the goal in front of his parents on Friday night, there was only one regret.

“I said, ‘Hey, I’m here every day and you haven’t scored yet, so if it takes having your parents come here, we should have done that a lot earlier,’” Cirovski joked.