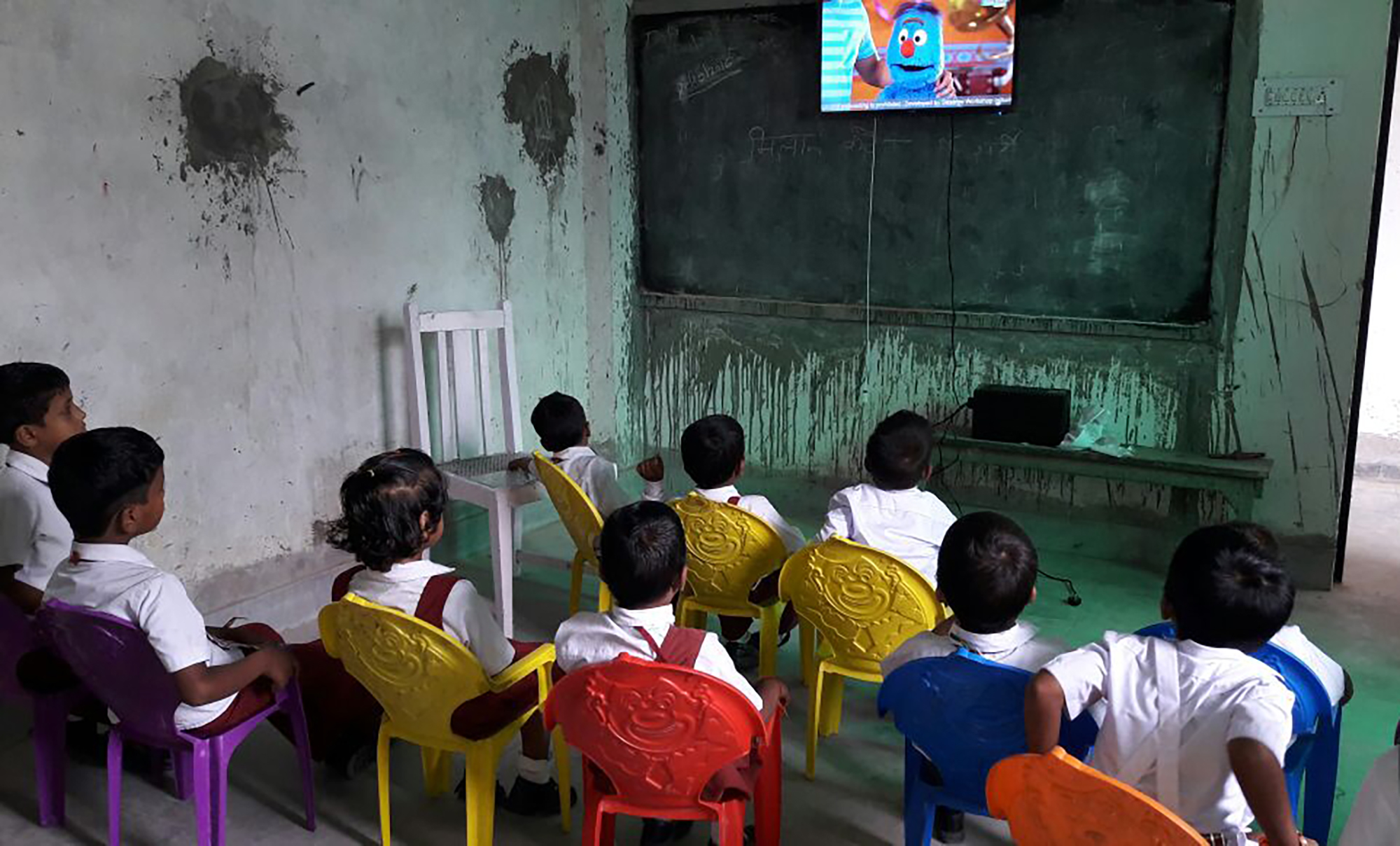 Chamki wears her auburn hair in pigtails, each one knotted with a light blue bow. Her pleated dress matches her ribbons.

She’s an advocate for girls’ education — and also a Muppet on Galli Galli Sim Sim, the Indian version of Sesame Street. On the show, she’s joined by a gaggle of other puppets, including a blue monster named Googly and a pink and purple lion named Boombah.

And, in a country where about 3.7 million people are living in extreme poverty, a University of Maryland professor has found that watching Chamki and her friends helps children reach higher levels of literacy, numeracy, health and socio-emotional development.

“What we’re seeing is we can use media to reach some of the most impoverished children in the world,” said the professor, Dina Borzekowski.

Over the summer, Borzekowski — who is also interim director of the Global Health Initiative at this university’s public health school — published a study on the effect Sesame Street has on preschoolers in India.

These results didn’t surprise Deepti Mehrotra, a researcher based in India who worked with Borzekowski. None of the other shows studied covered the same concepts as Galli Galli Sim Sim, or are as supported by research, she said.

Cultural perceptions surrounding girls’ rights are currently shifting in India, Borzekowski said, and Chamki’s character encourages girls to think bigger. While all children in India between the ages of six and 14 were given the right to an education in 2009, last year, 13.5 percent of girls between 15 and 16 were out of school, according to the Annual Status of Education Report.

And, Borzekowski said, another character on the show, Raya, teaches children in “low-resource and low-income areas” how to keep up their hygiene to prevent sickness. Raya wears her sandals when she goes to the bathroom and washes her hands with soap and water.

Mehrotra used to evaluate teachers for their classroom management skills. During that time, she found that the schools she visited often lacked audio and visual education strategies — which, she said, are the most effective ways of helping children learn. Galli Galli Sim Sim, though, provides the missing audio and visual stimulus.

“This really fills a big gap that’s there,” she said. “There is no other way to fill that gap better, which is why this project excited me.”

To gauge the children’s literacy, Borzekowski said the participating preschoolers were tested on their ability to identify and name letters, among other assessments. Likewise, numeracy was partially assessed based on number identification and naming, according to the published research paper.

A child’s understanding of heath was measured based off of their ability to identify “sometimes” and “anytime” foods, according to the research paper. Ice cream, for example, is considered a “sometimes” food.

For testing socio-emotional skills, Borzekowski said children were quizzed on naming emotions in a scenario and pinpointing strategies to resolve the situation. For example, she said, if Marta is lost in the market, how does she feel? What should she do?

Borzekowski said she’s been working with Sesame Workshop — the nonprofit behind the show — for about 20 years. For the paper she published over the summer, she said she worked with a team of 30 people in India. The goal, she said, was to build a team that could operate without her.

Jennifer Kotler, the vice president for content research and evaluation for Sesame Workshop, said that Galli Galli Sim Sim does more than just resonate with children — it also “makes their lives better.” She said she finds joy in watching children watch the show.

“I think there are global truths to what childhood is about and what children enjoy and find funny and what they need to learn,” Kotler said. “But it’s also important to see your own culture reflected in the television shows that you watch.”