There was a huge cube in the Iribe Center. Students could earn a job by solving it. 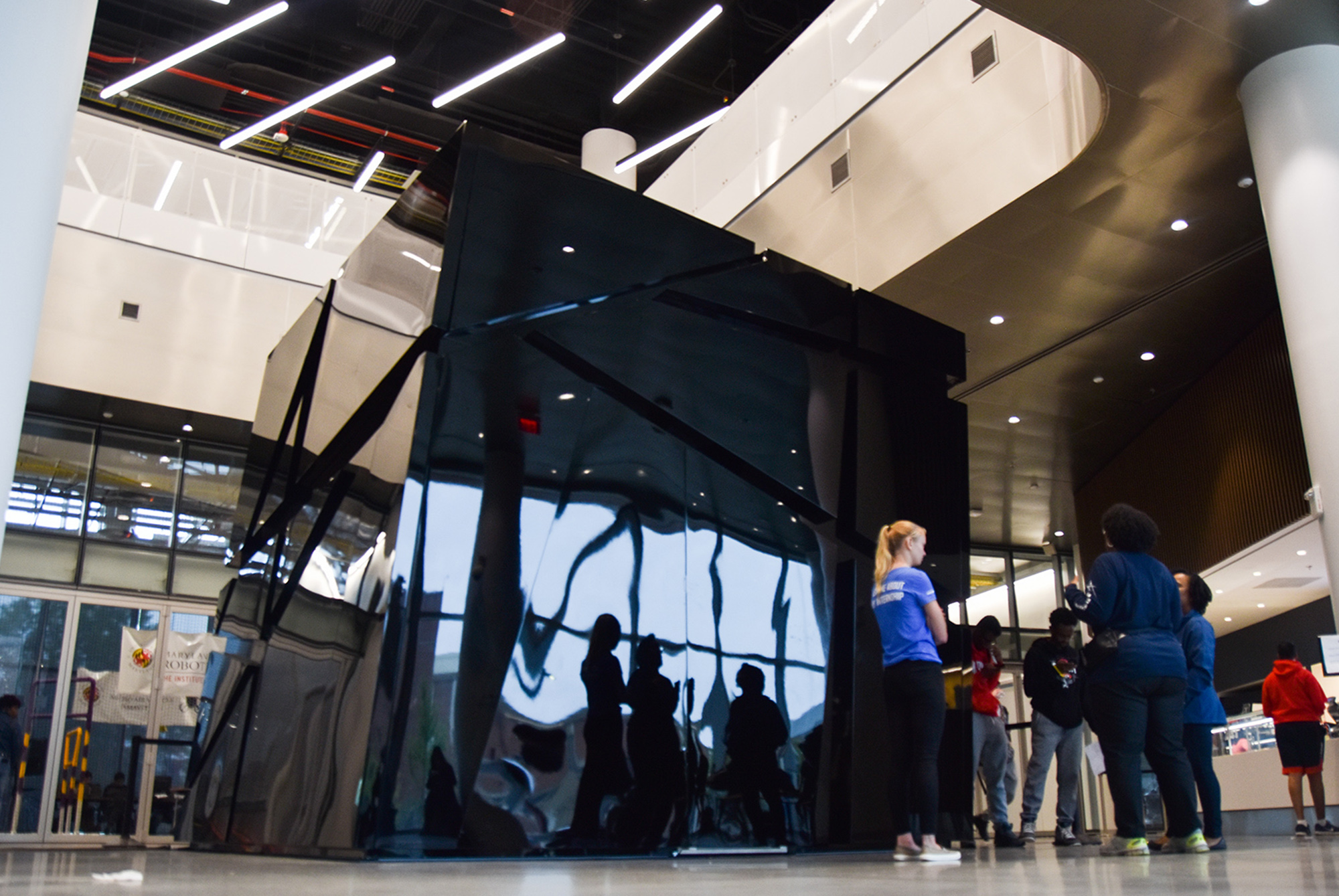 With a few taps on the screen, the hidden door to the Lockheed Martin Challenge Cube popped open like a bank vault, allowing the student who solved the problem into the mystery inside. (Joe Ryan/The Diamondback)

By Joe Ryan
For The Diamondback

For three days this week, a large black cube sat in the lobby of the University of Maryland’s Iribe Center, safeguarding its secrets for only the sharpest of minds.

Between Monday and Wednesday, the Lockheed Martin Challenge Box invited students across campus to solve engineering and computer science problems to earn a look inside ⁠— and possibly a job.

Students could select either engineering or computer science problems to solve. A correct answer to any one of those was the key inside the mysterious cube.

With only a few minutes remaining before the cube closed for good at 4 p.m. Wednesday, Sandeep Ramesh was last in line, frantically working on a solution to one of the problems. He had already spent two hours on it, and skipped one of his classes to keep working.

“They have three tests where they tell you what the answer should be, and I’ve tested those and got those right,” said Ramesh, a freshman computer science major. “So I’m going to say yes, I think I should get it right.”

Unfortunately for Ramesh, time expired before he could solve his way inside the cube.

Lockheed Martin created the Challenge Box last year as a way to recruit people for their space department, said Allison Sharpe, a spokesperson for the company. So far, the box has been to eight different events, including three other universities, she said.

Each question had a different level of difficulty, Sharpe said, with the hardest problems being called “high value” to correspond with the fact that any student who solved them was guaranteed a job offer or internship.

For all other questions, problem solvers were entered into the company’s recruitment database, giving them a little extra attention for applications, she said.

“So the high value problem is the one that gets you the letter of intent,” Sharpe said. “It’s taking [students] hours and hours. We’ve had students stay up all night working on them.”

For the first time, the box contained computer science problems in addition to engineering ones.

Despite being worried that students wouldn’t make an effort to solve the problems, Mount was encouraged by the level of involvement.

“I think like, every day, we had on the order of maybe 10 or so people that were solving some combination of problems,” Mount said. “So they were, you know, challenging but not impossible.”

About 600 students registered to compete in the challenge, but only about 245 made it inside, according to Joe Portnoy, a recruitment marketing representative for Lockheed Martin.

The cube, about 14 feet tall, only allowed enough space for about four people at one time. For those able to answer the questions, a two-minute presentation awaited them.

Surrounded by mirrors, a 360 degree light show began, sending the viewer among the stars, deep into outer space. A voice spoke, congratulating the viewer on their accomplishment, and asking for their help. Then, a hologram appeared, showing a woman projected through glass speaking.

The experience ended as quickly as it began, thrusting the viewer back into the center of the computer science building. For sophomore aerospace engineering major Nik Nair, what he saw in the box exceeded his expectations.

“I guess, to put it simply, it shows self-reflection,” he said.