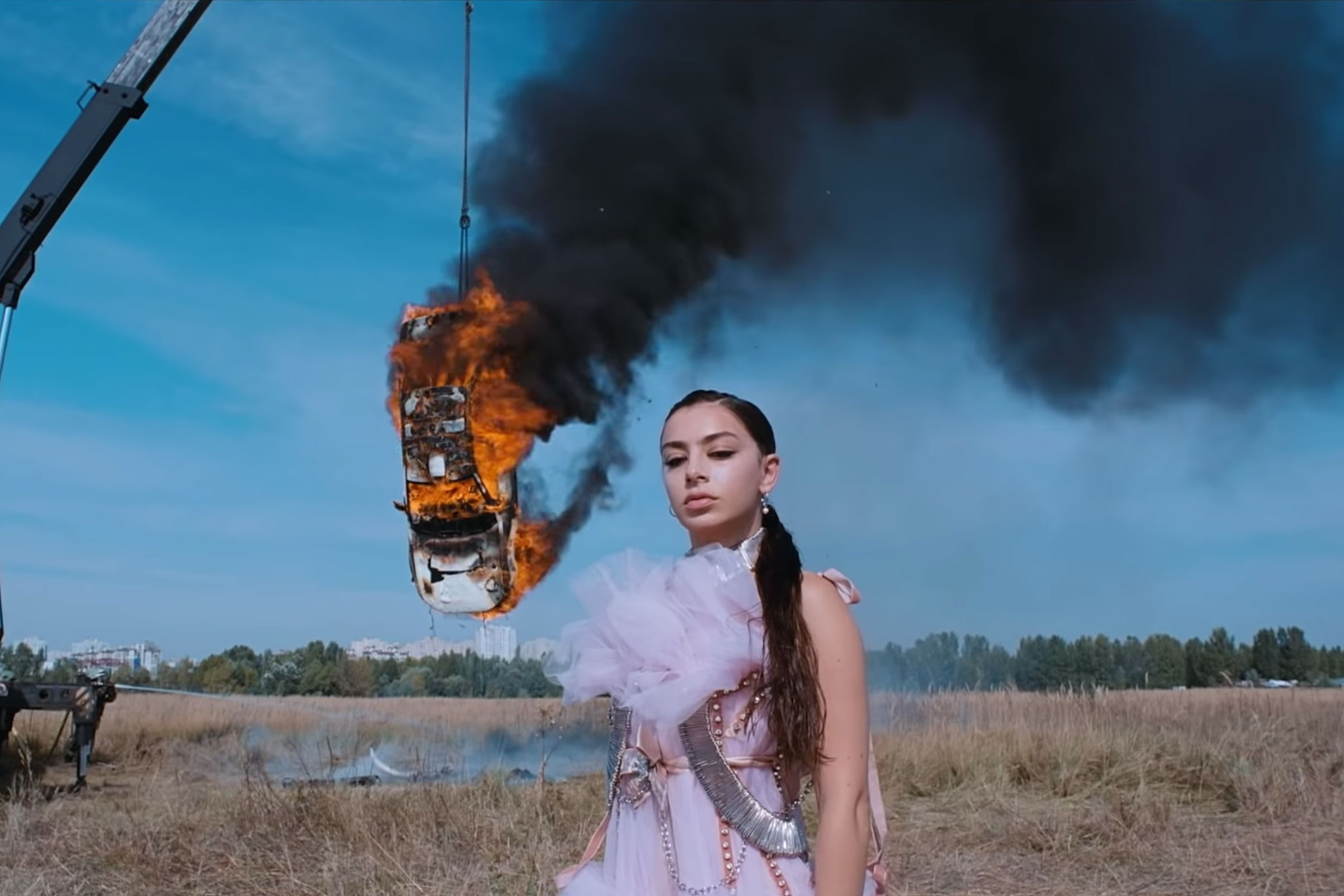 Charli XCX poses in front of a burning car in the music vieo for her song "White Mercedes" (Photo via YouTube).

Charli XCX released her newest album, appropriately titled Charli, last month — her first in nearly five years after a slew of smaller releases, including mixtapes and an EP. Although her music may not be surging the charts, her fresh take on what is considered pop makes her ever the dynamic artist and a potential precursor of pop music for years to come.

The music videos released so far from Charli have all been wildly different and severely interesting, so I thought, “Why not break them down and detail all their weirdness, artistry and pure fun?” And don’t miss the laughable amount of not-so-subtle Beats shoutouts.

Whether it’s Troye dressed as Eminem, Charli dressed as all five Spice Girls or both of them cartoonized as Sims dancing in a flaming kitchen, there are references that any and everyone vaguely aware of the ’90s can appreciate. Every detail of the video is so meticulously thought through, packing in so many nods to the decade, it’s almost comedic.

“Blame It On Your Love,” featuring Lizzo

Never one to shy away from the bizarre, Charli takes a step back on this video for not much more than some restrained dancing with prosthetic, pointed elvish ears — which Lizzo joins in on briefly. Instead, she allows the spotlight to be occupied by the love affairs of the fantasy characters she created for the video — fertility nymphs, k9 filterheads, intimacy revivalists and sea level survivalists — showcasing the beauty and diversity of unfiltered, true love.

Whether she’s suspended from a car hanging from a crane or standing on top of a moving, driverless truck, Charli looks angelic. Although this video is a bit more abstract than action-packed, the effort needed to create a complete, sensical video is there. And when some of the effects, such as the burning of a car, garnered worries of air pollution, eco-friendly queen Charli subsided the concerns in a tweet, explaining the special effects used.

The great-grandaughter of the song “1999,” this song is the synth-heavy anthem of our chrome future. In Charli’s version of the future, there is nothing but jet skis (and yes, they are white, and some of them are on fire), and she poses on hers every which way just because she can. Troye’s stunt double does some cool flips, but you almost want to laugh at how obvious it is that he’s not the one doing them. There’s not much variety to the cinematography in this video, as it’s mainly high shots of Charli from above simply sitting on a jet ski, but the restraint matches the crisp, cool energy of the song.

“Gone,” featuring Christine and the Queens

Repeating the imagery of white cars, red eye make-up and lots of fire is this chaotic video for an equally chaotic track. Almost like a transcribed descent into madness, the viewer sees Charli and Christine free themselves from a car they’re tied up in, just to begin dancing in a frenzy as flames encircle them. Definitely worth a watch, especially considering the song’s spot on Pitchfork’s list of the 200 best songs of the decade.