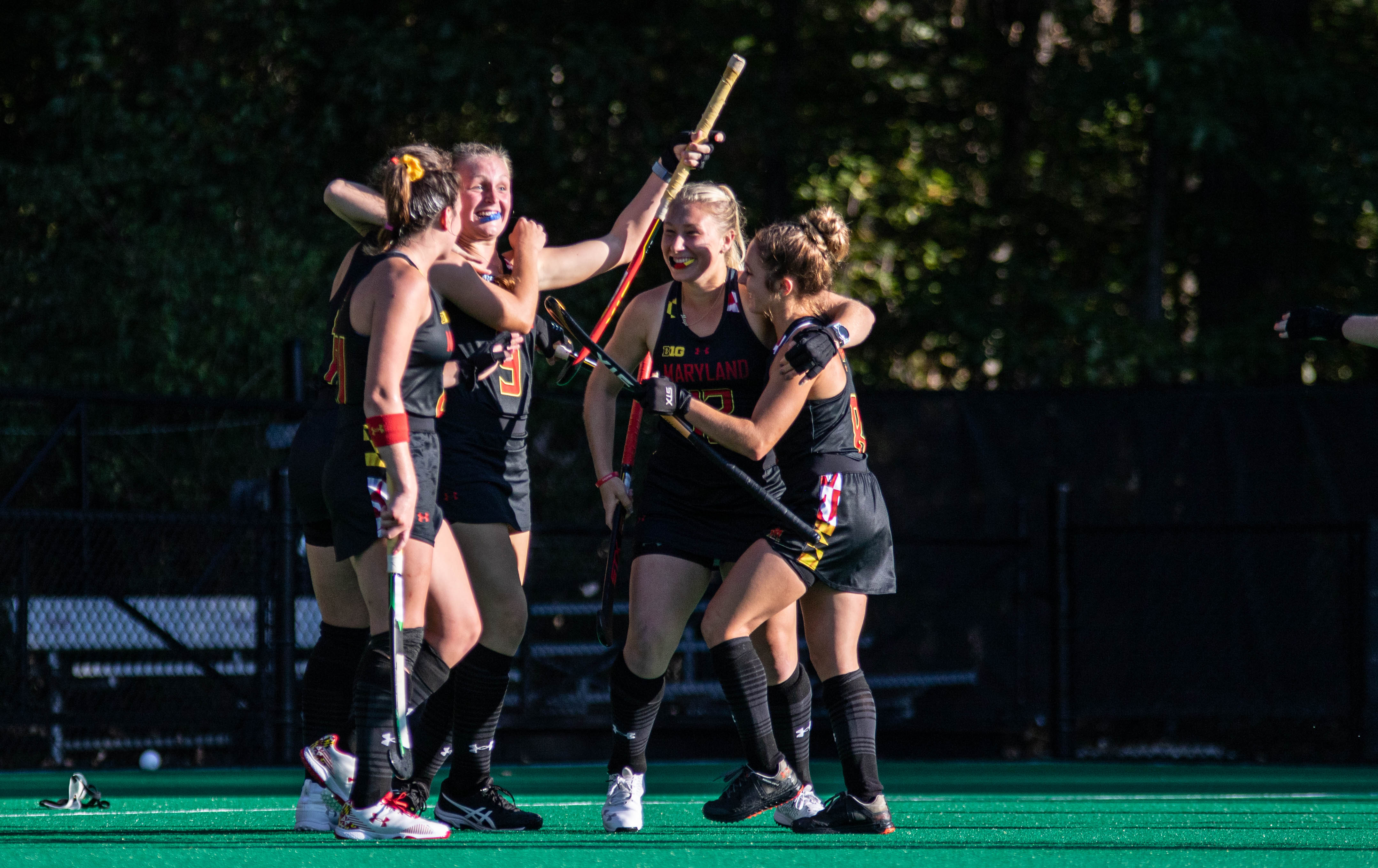 Maryland field hockey celebrates during its 3-0 win over No. 6 Iowa on Oct. 11, 2019 at the Field Hockey & Lacrosse Complex. (Julia Nikhinson/The Diamondback)

With the third quarter coming to a close, there was nothing but green turf in front of Maryland field hockey midfielder Brooke DeBerdine. So she took off.

DeBerdine — a central figure in the Terps’ counterattack — has always been a talented dribbler, so it was no surprise to see her drive at the Iowa defense with reckless abandon.

But with no goals or assists through her first 12 games of the season, there were question marks surrounding DeBerdine’s ability to create goal-scoring opportunities for herself and her teammates.

Those concerns were quickly assuaged, though, as DeBerdine delicately flicked the ball toward the goalmouth, finding sprinting midfielder Taylor Mason, who summarily put the ball past goalkeeper Grace McGuire to push the Terps’ lead to two goals — one they wouldn’t relinquish in Friday’s 3-0 win over No. 6 Iowa to take control of the Big Ten.

“It’s huge for us,” forward Madison Maguire said, “the team that’s first in the Big Ten gets a bye in the Big Ten tournament, so that’s key. You don’t want to play three games in a weekend.”

[Read more: When Maryland field hockey meets Iowa, the Maguires will be on both sidelines]

It was a war of attrition in the opening 15 minutes, with both teams flying across the pitch. But for all the effort, neither side carved out a breakthrough.

“I think that they play a little chaotic with their field hockey,” Maguire said. “We were playing down to what they were playing.”

The Terps created the most dangerous chance in the first, capitalizing on a lethargic Iowa transition from attack to defense. After a free hit, a long ball found forward Emma DeBerdine down the field as she streaked toward the cage. The freshman wasn’t able to get the ball out of her feet, though, as McGuire dealt with the threat.

Both teams found more joy in their attacking thirds in the second quarter, with the Terps breaking the deadlock within two minutes of the game restart. Maguire swiveled her way through the Hawkeyes’ backline before backhanding the ball past an out-of-position McGuire.

After the first quarter, we said ‘Alright guys, let’s play Maryland hockey. Let’s get the ball and we’ll possess it,” Maguire said. “We did that.”

[Read more: “She’s just a spark”: Emma DeBerdine has been a jolt of energy for Maryland field hockey]

But as the game neared halftime, it was Iowa that was in control. Frost — named the NFHCA’s Division I Player of the Week for the second time this season — made three saves to ensure Maryland would head into the intermission holding a one-goal edge.

“Noelle had a great game,” Meharg said, “she had seven saves and is doing the stuff that she’s been doing.”

Despite the Terps’ lead, the game felt decidedly even through the first 30 minutes — Iowa managed to outshoot the Terps, 5-3.

Coach Missy Meharg’s squad held the lead, though, and they doubled it in the third frame.

DeBerdine rumbled down the right flank, taking the ball wide before floating a pass in front of the Hawkeyes’ goalmouth. Mason got the vital touch, squeezing the ball past McGuire’s desperate pirouette to push the Terps’ lead to two.

It was Mason’s first goal of the season and the second of her career.

“I saw that nobody was up there,” Mason said, “I was [thinking] ‘Brooke’s going for it, I really, really want to get it.’ … So I was just like ‘Okay, I’m going to go support her, just so we can get outcomes.’”

And that was all the Terps needed, handling Iowa’s improved threat in the fourth. The Hawkeyes eventually opted for an empty net in an effort to pull a goal back. But Maguire dashed any hopes of a Hawkeyes comeback, flicking the ball into the empty cage with three minutes left to extend Maryland’s win streak to nine games.

“Games like this are funky,” Meharg said. “You don’t need a lot of stats but if you’re opportunistic, you’re going to make it come.”