When Maryland field hockey meets Iowa, the Maguires will be on both sidelines 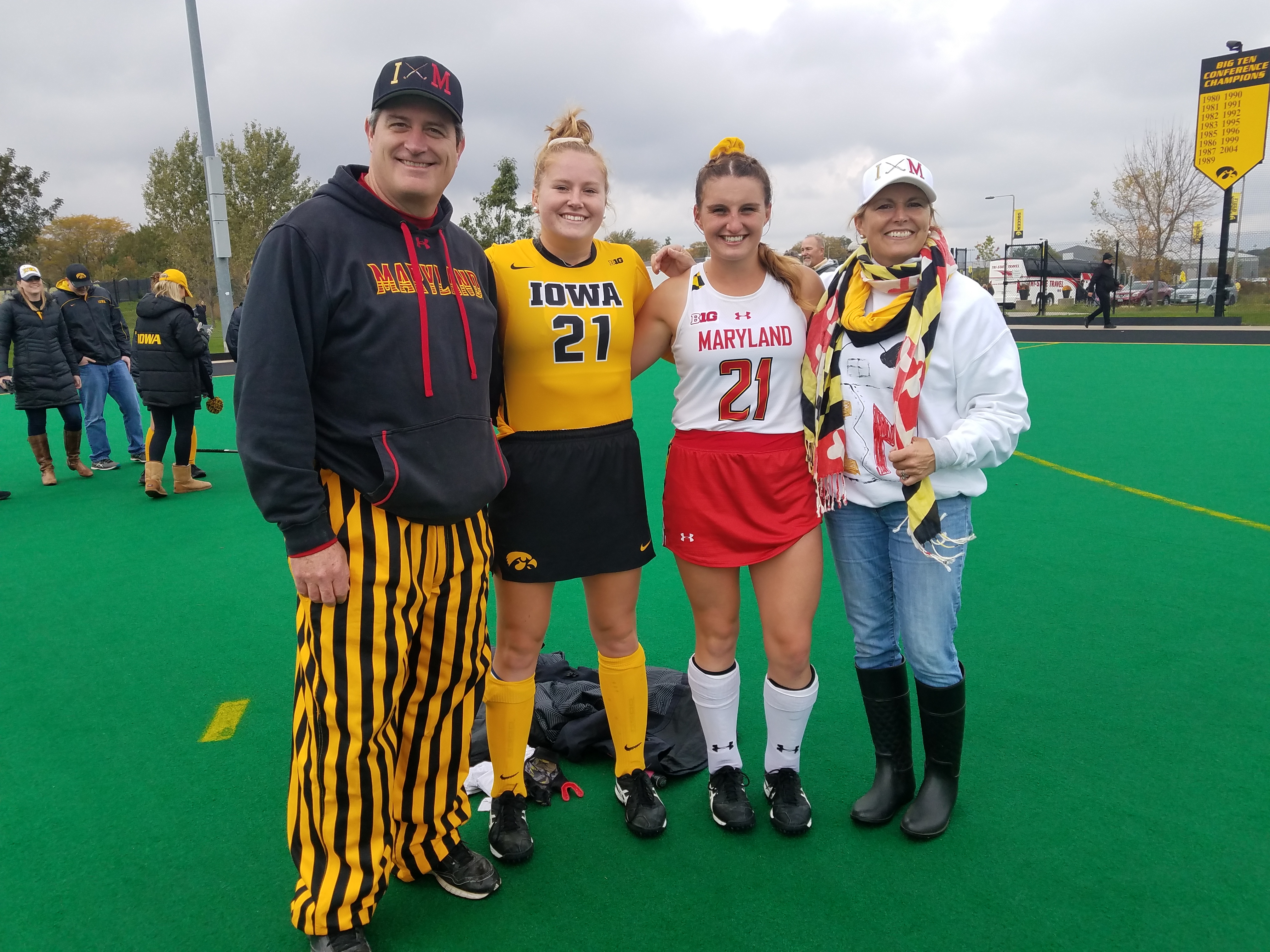 Madison Maguire knew exactly where the ball was going early in Maryland field hockey’s matchup against No. 3 Connecticut on Sunday.

The forward flashed in front of Connecticut’s net, looking to screen goalkeeper Cheyenne Sprecher when defender Riley Donnelly fired the ball toward the cage. With Sprecher scrambling, Maguire lunged to flick the ball beyond the outstretched Huskies netminder and extend Maryland’s lead to 2-0, one it wouldn’t relinquish.

But as soon as the final buzzer blared across the Field Hockey and Lacrosse Complex, Maguire shifted her attention, hoping to get back to her dorm and in front of her laptop.

Nine hundred miles away in Iowa City, another Maguire was making her mark for a Big Ten powerhouse. Makenna, a forward for the Hawkeyes, pestered UC Davis’ backline as the first player off the bench, helping No. 6 Iowa outshoot the Aggies 24-1 en route to a 3-1 victory.

And Madison was watching, as she does for all of Makenna’s games.

“I text her every single day,” Madison said. “We FaceTime after every game, every practice.”

The two share a bond — a bond forged in a household where the thwacking sound of sticks striking field hockey balls was encouraged and daily conversations routinely delve into a debate about various field hockey tactics.

So when No. 2 Maryland takes on the No. 6 Hawkeyes on Friday in a battle for the top spot in the Big Ten, there’s more in play than wins or losses.

Rather, the game will represent something more: two sisters adding to their family’s legacy — a legacy that they were destined to be a part of.

Field hockey was in the Maguires’ blood, but there was no pressure to play the sport their mother had fallen in love with. Instead, growing up, Makenna and Madison played just about any and every team sport.

But there was a certain inevitability to it, even as they played basketball and lacrosse. Field hockey would always win out, following in the family’s rich history.

Their mom, Kathy, was a star at North Carolina, earning All-American honors in 1989 en route to a national championship. Kathy’s younger sisters, Kelly and Lori, played at North Carolina and Northwestern, respectively.

So as Madison and Makenna began choosing which sports to focus on, field hockey rose above the rest.

“When it came down to middle school and high school, my sisters and I just fell in love with field hockey,” Madison said. “That’s what we knew we wanted to do … wanting to be like my mom — my role model.”

Field hockey has changed since Kathy was a free-scoring forward for the Tar Heels, tipping in shots close to the cage and showing off the blistering pace that allowed her to score 26 goals and earn the ACC tournament MVP honor in 1989. Those attributes have translated to her daughters, too.

“Both of them just got incredible speed,” Michael Maguire said. “You could see them run away from girls — that’s where I first saw it.”

As they improved, though, setting the Shore Conference alight in their early high school years, the sisters yearned for greater competition than Rumson could offer.

So, the sisters swapped clubs, joining X-Calibur in Pennsylvania — one of the top club teams in the nation. They were fully committed, despite the ponderous commute.

“They used to drive an hour and 35 or 40 minutes to practice twice a week to play club hockey,” Michael said. “It was a little bit of a sacrifice.”

Their sacrifices paid off, with Madison playing alongside future Maryland teammates Kelee LePage and Hannah Menge. The sisters also saw an uptick in their high school forms, with Madison becoming the first 100-goal scorer in Rumson history, and Makenna racking up over 100 goals and assists in her career.

Strong showings for X-Calibur solicited interest from colleges, with Madison projecting as a do-it-all midfielder while Makenna impressed in the defense. Eventually, Madison committed to play for Meharg at Maryland. Makenna, two grades below her, would take an increased role on the club side before following in her sister’s footsteps, joining the Hawkeyes in 2018.

“It worked out,” Michael Maguire said of his daughters’ decision to join X-Calibur.

The 2018 season was a challenging one for the Maguire sisters. Madison, despite earning NFHCA All-Mid Atlantic Region Second Team honors, lost her second straight national championship, with the Terps falling to the Tar Heels, 2-0.

Meanwhile, Makenna struggled to break into the Iowa lineup, coming off the bench and failing to record a goal in any of her 16 appearances.

The sisters returned to New Jersey at the season’s end. Under their mom’s tutelage, the pair hit the film room, examining their mistakes over the course of the season in an effort to improve their games.

“My wife has a much greater depth of knowledge of certain things that she sees,” Michael said. “The game has changed a lot since my wife played — the sticks have changed, the rules have changed. But the basic fundamentals of where to be [have stayed the same] … I think that’s actually helped Madison and Makenna.”

However, the most valuable aspect of the offseason was Madison and Makenna’s work with their youngest sister, Meadow.

A junior in high school, Meadow looks to carry on the family legacy in her own right, verbally committing to Princeton. With high school field hockey often eliciting feelings of frustration due to the lack of quality competition, Madison and Makenna have worked closely with Meadow to help her sharpen her abilities and prepare her for the next level.

“Meadow gets a chance to be coached by her sisters,” Michael said. “They’ve gone through it, and they can explain certain technical things which helps them be better players.”

Teaching their younger sister skills helps Madison and Makenna notice which areas they can improve upon in their own games, too. And both have seen the beginnings of a fruitful season for Maryland and Iowa, respectively. So far in 2019, Madison has netted six goals and added another seven assists. Makenna scored her first goal on Sept. 6 against Central Michigan and has nearly equaled her minutes total from last season.

The Maguire sisters inherited a culture of field hockey that was formed decades before their births — Michael’s mother played, and the pair’s younger cousins are the next in line to pick up the sport. Instead of ignoring that culture and its impact on their family, they have embraced it.

So when the sizeable Maguire contingent arrives at the Field Hockey and Lacrosse Complex on Friday afternoon, the result won’t matter.

Instead, the Maguires will be cheering — for Maryland, for Iowa and for their heritage.

“This is a big one,” Michael said. “Hopefully we’ll have a couple other kids involved in field hockey down the road, but it’s been a great experience so far, and a great tradition.”