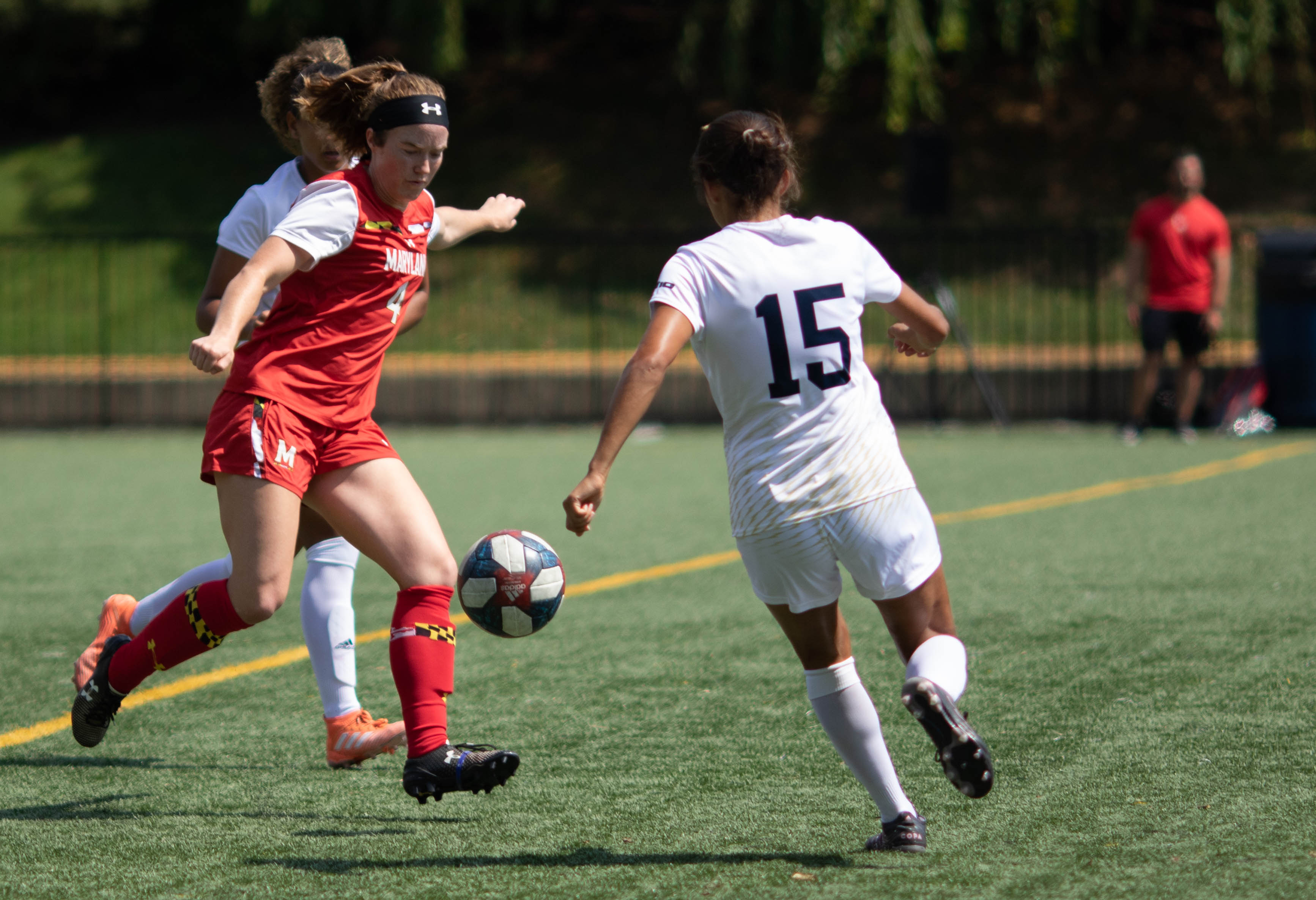 Midfielder Darby Moore gets on the ball in Maryland women's soccer's 1-1 draw with George Washington on Sept. 8, 2019. (Julia Nikhinson/The Diamondback)

Developing an early attacking presence has become the focal point of Maryland women’s soccer’s offense, and with four wins in its past six games, the results have been apparent .

In the race to make their first-ever Big Ten tournament, the Terps will have to continue to impose their will at the beginning of matches. But for perhaps the first time this season, coach Ray Leone’s squad is set to face an opponent that can go toe-to-toe with it at its own game.

Maryland will take to the road to face a Nebraska team that sports an uninspiring 3-8-2 record — but has flashed an aggressive style of play. And though the Terps have yet to concede before the 20th minute this season, they know the Cornhuskers’ similarly assertive playstyle at both ends of the field poses a significant threat.

“We’ve got to get sharp on the ball,” Leone said. “The way they defend, the way they press you is unbelievable. It’s like a basketball full-court press. You have to be good on the ball and break that pressure.”

Most of Maryland’s opponents this season have taken a back seat, particularly in the early stages of games. The Terps are outshooting opponents 98-67 in the first half of games, but Nebraska will also be looking to establish early offense. The Cornhuskers — despite their record — have outshot opponents 69-49 in the opening half.

Leone said he wants to see his squad attack and defend as a unit against the Cornhuskers.

“Nebraska does the same thing very well,” he said. “When they go, they go. All of them. We’re going to have to absorb and do the same thing to them.”

As Maryland looks to overcome their latest Big Ten foe, it may come down to who can finish. The Terps struggled to put away opportunities early on in the season, but after Leone emphasized being more clinical in practice, Maryland is seeing through more chances.

Midfielder Darby Moore said that the Terps’ 6-2 victory on Sunday over Illinois was a showcase for their improved ability to finish opportunities.

“It was really exciting to be able to see what we’ve been working towards,” Moore said. “Putting away almost every opportunity we got was a really good feeling.”

Through 13 games, Maryland has 21 goals — 10 of which have come in the past four games. Nebraska has not been nearly as efficient with their chances. Through the Cornhuskers’ 13 games this season, they have scored eight goals.

Regardless, the Terps are prepared for a dogfight in which a strong mentality could prove to be the difference.

“Our biggest thing is maintaining a high mindset for us, making yourself accountable,” Moore said. “In away games, that’s the hardest thing. They have a similar style of play to us, but I think if we bring both our mindset and our skill, it can definitely fall our way.