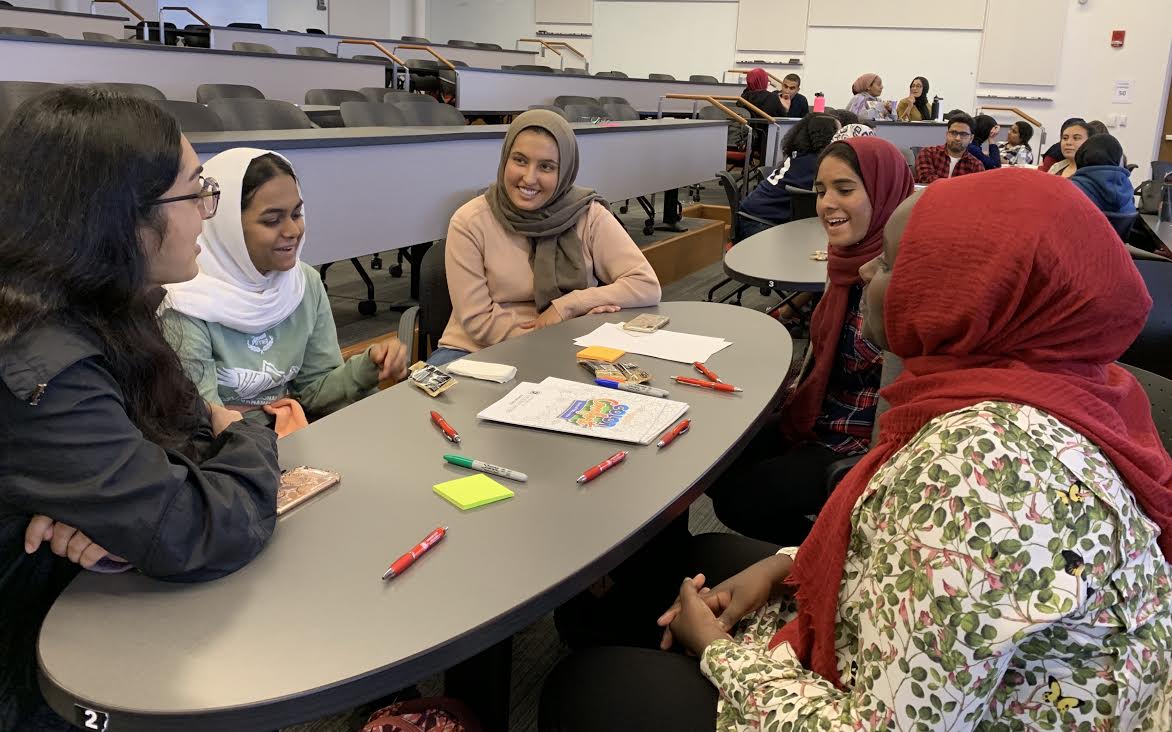 By Hope Kahn
For The Diamondback

Seven out of 13 people responded that their day was a three — meaning simply average — on an anonymous survey at the beginning of the Healthy Muslim Minds event Tuesday.

The event, part of Mental Health Awareness Week at the University of Maryland, focused on four topics, catered to the Muslim community: depression, anxiety, stress and self care.

Hannah Shraim, the Muslim Students’ Association secretary, said that counselor Nehal El Guindy, who is Muslim, approached MSA wanting to create a mental health event catered to the Muslim community. El Guindy, along with the MSA, collaborated to hold the event at the Edward St. John Learning and Teaching Center.

Shraim said mental health can be a “taboo subject” in her faith.

“We’re given tools to help us understand and deal with mental health,” she said. “But within our cultures, we don’t really talk about if we’re feeling anxious or if we have depression. If you do, people just advise you to pray it off.”

El Guindy, along with Kayi Hui-Spears, another counselor, guided the presentation with a focus on creating dialogue among the audience. A hypothetical scenario was given to discuss, a brainstorm session on self care tips was held and affirmations were written on post-it notes.

The presentation highlighted the challenges facing Muslim youth, including feelings of alienation and isolation, and the difference in cultures at home and outside. Possible Muslim mental health stigmas and taboos were described with quotes, such as, “you’re just not praying enough,” or that “your faith isn’t strong enough.”

Chaplain Tarif Shraim spoke about the misunderstanding and ignorance of mental health within the culture.

“We are made of body and soul,” Tarif Shraim said. “Healing is at the heart of our culture. When we discuss cancer we expect someone to seek medication or treatment, but for some reason when we speak of mental health, we don’t want people to seek treatment.”

Ahmad Dajani, a senior information systems and operations management and business analytics major, said that because he has been exposed to enough people who suffer, he can’t ignore the importance of mental health.

“Last night, I was helping a friend who was going through a panic attack, and in some moments I knew what to say, and in others I didn’t,” Dajani said. “[The event] gave context to what level my peers are at and some of them were not as aware of how to deal with struggles. It gave me context as where we are as a community when dealing with mental health.”

Tasnim Benalla, a public relations officer for the MSA, said that the event was not only trying to create a safe space for Muslim students to talk about their feelings, but also to bring awareness to the resources available on campus.

“The Muslim Student Association is a community. It’s not just a club on campus that throws events,” Hannah Shraim said. “It’s more of a brotherhood and sisterhood that’s formed between our members and the fact that we’re all young Muslims in college.”