A promise to John: Wife of slain Capital Gazette journalist finishes book he left behind 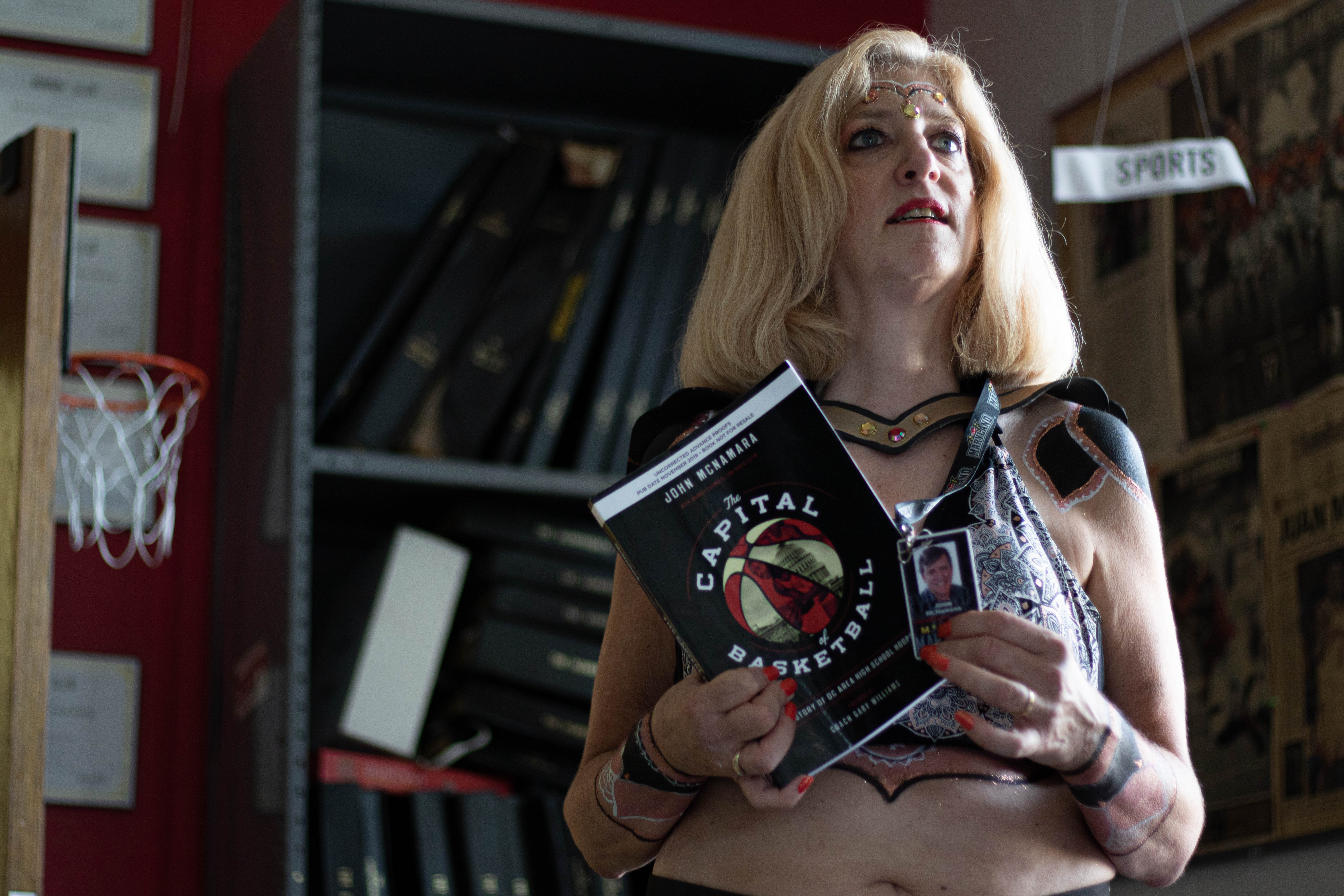 Andrea Chamblee holds the book her husband, John McNamara, had worked on for over a decade before his death in the Capital Gazette shooting. (Julia Nikhinson/The Diamondback)

She stood tall in The Diamondback’s offices above the University of Maryland’s South Campus Dining Hall, towering over the newsroom in gladiator stilettos. Atop her head sat a gem-encrusted tiara. She had clad herself in multilayered pauldron and gauntlet tattoos, and wore an ornately decorated top and armored skirt.

Chamblee said it was her way of reuniting with a part of herself — a “warrior” presence, she called it — that she lost over a year ago.

Last summer, a gunman with a long-standing grudge against the Capital Gazette stormed into its Annapolis newsroom, killing five people. Chamblee’s husband, John McNamara — a sports writer and editor at the paper who graduated from this university in 1983 — was one of them.

For over a decade before the shooting, McNamara had been chipping away at his passion-project: A book chronicling 100 years of high school basketball in the Washington, D.C., Metro area. At the time of his death, the book was close to done — but some sections still needed to be written.

So, for the past year, Chamblee dug through her husband’s notes and outlines to finish what he started. On Nov. 3, The Capital of Basketball will be released.

“John always did whatever I could have asked of him, and I never really had a chance to pay him back because he didn’t need much,” Chamblee said. “I thought the book was the least that I could do to pay him back. It’s the last promise I can keep for John.”

The book chronicles the players, coaches and teams that, according to its publisher’s website, made D.C. “second to none in its contributions to the game.” It tells the stories of figures such as Edwin B. Henderson, an educator and local NAACP leader who introduced basketball to black Americans in Washington, D.C., and Earl Lloyd, the first black athlete to play in the NBA.

But as Chamblee sorted through the materials, she came across a stumbling block: Although McNamara had left behind three boxes of notes for the book and had selected photos of players he had planned to include, he hadn’t captioned them. He didn’t need to — he knew all of their names by heart.

So Chamblee had to look them up, one by one, from high school yearbooks across Washington, D.C., Maryland and Virginia. She visited the homes of coaches and others familiar with the basketball scene to fill in the gaps.

And, to pinpoint when the photo was from, Chamblee said she honed in on the players’ style.

“I kind of had to look at the shorts they were wearing and see what decade it might have been from,” she said. “Were the shorts long or short or shiny or not . . . were they pulling up their socks like Walt Williams?”

Chamblee met McNamara when his career in journalism was just getting started, as the assistant sports editor for The Diamondback.

They both shared a love of sports. McNamara covered them for The Diamondback, and Chamblee for the yearbook, for the most part, though she contributed articles to The Diamondback as well.

They would both sit in the press box at football games, she said. When McNamara had to turn his attention away from the game to take notes, she would memorize the goings-on and relay what he had missed. And when it came time to interview players after the final whistle, she and McNamara would split up to talk to more players.

Joshua McKerrow, a staff photojournalist for the Capital Gazette, said McNamara’s passion for sports ran deep, and he had a gift for conveying emotion. He remembered the times McNamara would tell him about Len Bias, a University of Maryland basketball player of immense talent who died of an overdose in 1986.

McNamara painted a full picture of the young man’s impact on his community and the university, McKerrow said.

“He talked about it like you’d talk about a family member dying,” McKerrow said. “He would talk about Maryland sports, and [stories] would just kind of come pouring out of him … It was like his special thing.”

Rick Hutzell, the editor of the Capital Gazette, said McNamara held the book close as he worked on it, sharing few details of his progress. He said finishing the book must have been an incredibly difficult task for Chamblee.

“For her to be able to step in and finish it … it’s not only an honor to John, but it’s a testament to her intelligence,” he said.

Being at the university “brings back a lot of memories,” Chamblee said. She had just visited the Capital Gazette Memorial Seminar Room in Knight Hall, which was an emotional experience, she said. Most of the memories are happy, though, she said.

Back in The Diamondback’s newsroom, a photographer pointed out where Chamblee was standing – right next to the sports desk.

“I thought John sat on this side,” Chamblee said with a small smile.

Over the last few months, Chamblee said she’s been asked many times if she felt her late husband’s presence as she worked on the book. But she said that hadn’t been the case.

“I felt his absence,” she said. “I’m hoping I’ll feel his presence, but not yet. And maybe never. But I hope he feels mine. I hope he knows that I finished it for him somehow.”