“Such an impact”: Hundreds remember John McNamara at UMD Chapel 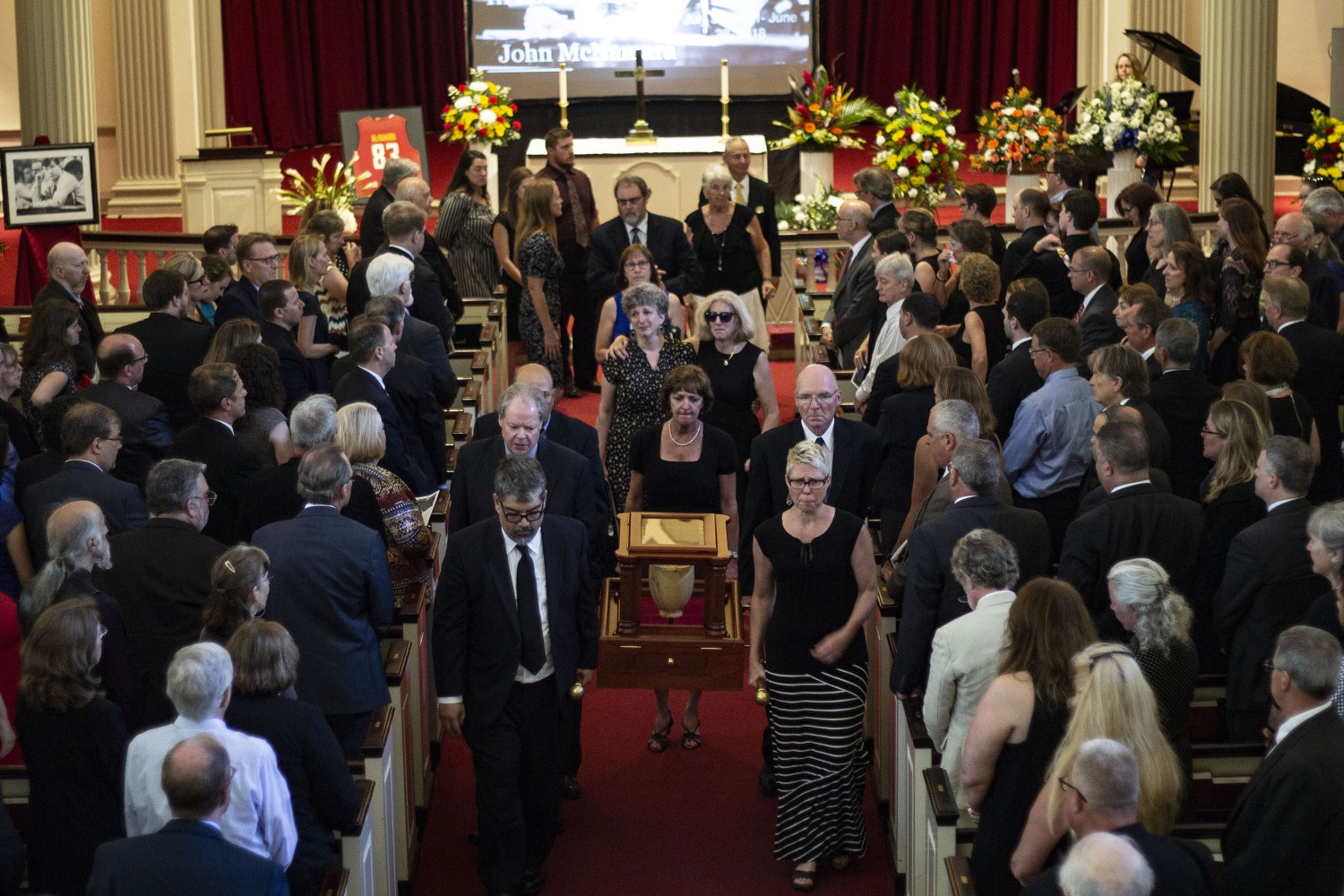 John McNamara may never have married his wife if it weren’t for Boomer Esiason.

During a Maryland football game against North Carolina on Oct. 31, 1981, Esiason, the Terps’ quarterback, suffered a neck injury and was taken off the field in a stretcher. McNamara, then a reporter for The Diamondback, was friends with Esiason, and decided to wait for him to come back from the hospital.

In the meantime, McNamara grabbed a beer at a College Park bar. So did Andrea Chamblee, whom McNamara recognized from one of his journalism classes.

“He came up to me and said, ‘Our journalism 201 teacher is very impressed with your work,'” Chamblee said. “He would get in [to the class] late from being at The Diamondback late at night, and he would slip in the back of the class, and I would be at the front of the class like a goody-two-shoes answering all the questions.”

McNamara made sure Chamblee and her roommate got home safe, and the next day, he called the phone at Montgomery Hall — which, she recalled, was shared between 16 girls — to ask her out. Four years later, they were married.

McNamara, a sports writer at The Capital Gazette, was one of five killed June 28 when a gunman open fired at the newspaper’s Annapolis office.

At this university’s Memorial Chapel on Tuesday, McNamara’s friends and colleagues shared their memories of him as a considerate person and dedicated worker.

In front of the pews was an honorary Maryland basketball jersey with McNamara’s name on it and the number “83” — the year he graduated from this university.

John McNamara was a big Terps fan, and an honorary Maryland basketball jersey stood at the front of his memorial service Tuesday. (Julia Lerner/The Diamondback)

The service began with a procession set to the tune of “In My Life” by Paul McCartney and John Lennon, as hundreds of colleagues, family members and friends looked on.

On McNamara’s first day of work at The Capital, he walked into the newsroom wearing a Mets jacket. Even when he sat down, he wouldn’t take it off.

Gerry Jackson, the sports editor at the Capital, said he thought to himself, “How on earth am I going to get along with this guy?”

But Jackson quickly grew to admire McNamara for his dedication to the job. Jackson said he “would never leave the office without asking, ‘Is there anything I can help you with?'”

Maryland sportscaster Johnny Holliday, who worked closely with McNamara for decades, said he was fond of his work ethic, as well as his “burning desire to be the best possible writer he could be.”

“It isn’t often a person makes such an impact — so forceful, so meaningful, so immediate — that you realize this person was really someone special, so different from all the others in the workplace,” he said.

Mike Edwards, a longtime friend of McNamara’s, read a passage from Bird by Bird: Some Instructions on Writing and Life by Anne Lamott. Lamott described the ability of writers to bring people joy amid the many tribulations they face in life.

“When writers make us shake our heads with the exactness of their prose and their truths, and even make us laugh about ourselves or life, our buoyancy is restored,” she wrote. “It’s like singing on a boat during a terrible storm at sea. You can’t stop the raging storm, but singing can change the hearts and spirits of people who are together on that ship.”

The University of Maryland Memorial Chapel hosted the funeral for John McNamara, one of the five journalists slain in the Capital Gazette shooting in June. (Julia Lerner/The Diamondback)

After graduating from this university in 1983, McNamara began working at the Morning Herald in Hagerstown. There, he became roommates and friends with Doug Dull, who was the Herald’s sports editor before moving to California.

Whenever Dull would fly to Maryland to visit his family, McNamara would volunteer to pick him up from the airport, just to spend time with him to catch up and talk.

“[We would be] savoring an hour together that we otherwise wouldn’t have shared,” said Dull.

After the memorial, the crowd traveled to Stamp Student Union for the reception. Reflecting on the service, Chamblee said she thought the eulogies were moving.

“One of the best things about hanging around a bunch of fabulous writers is when you ask for their words, you get fabulous words,” Chamblee said. “So his friends really gave him a moving tribute and I can’t express how much I appreciate that.”

Left on the tables at the reception were small packets of wildflower seeds. Written on the packets was, “To be planted in loving memory of John P. McNamara.”