The students in yellow: What it’s like to be police auxiliary at UMD 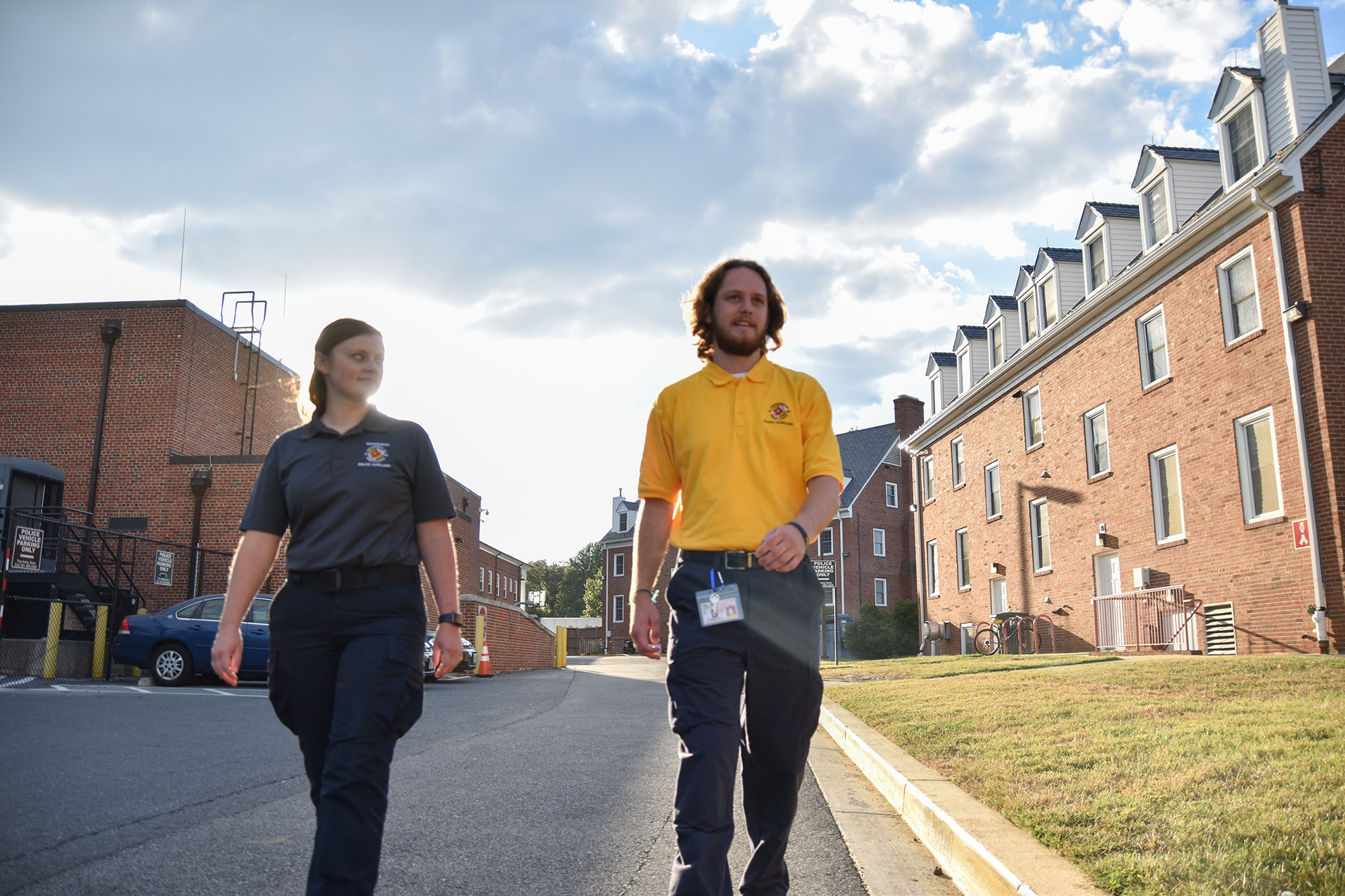 Day in and day out, they walk in pairs around campus at the University of Maryland, clad in bright yellow shirts.

Unlike other students, they aren’t on their way to class, and they aren’t hanging out with friends. These students are part of the University of Maryland Police Auxiliary — a special program that employs students to help keep the campus safe.

“They’re out and about … [they’re the] eyes and ears of the University Police Department,” said University Police officer Patrick Dykstra, a 2008 graduate of this university and former police aide. “[And] a link between us and the student population.”

The department employs more than 60 police aides, said Sgt. Rosanne Hoaas. Most of the police aides work between 20 and 40 hours a week, said Julia Garman, a student police aide supervisor.

On foot patrol, they monitor who comes and goes from campus every night and work special events and building security. They’ll even provide a safe escort for any student who may need one at any time of day.

“I’m a very hands-on person,” Garman said. “I realized that I don’t like sitting behind the desk all the time.”

Michael Piepmeyer, a sophomore criminology and criminal justice and psychology major, also began work as a police aide during his second semester. Piepmeyer said he originally wanted to pursue a career in federal law enforcement, but now wants to focus on local police work.

A Southern California native, Piepmeyer said he has already applied for a summer internship with the Los Angeles Police Department.

“I’ve really enjoyed just kind of being out in the community,” he said. “In the limited capacity that we do have, in my interacting with people.”

Garman and Piepmeyer both said there is a lot of variety in their shifts. One night, they could be manning the Gatehouse at the entrance to this university. During foot patrol, student police aides check the blue lights on and near campus to make sure they’re functional.

On other days, they may be working theft prevention — patrolling the campus parking lots and peeking into cars, looking for expensive items. The department then notifies the registered car owners and reminds them not to leave valuables out in the open.

“Everyone always thinks that those are us trying to ticket people,” Piepmeyer said. “That’s not what we’re trying to do at all.”

“We’re students,” he said. “We’re not officers, we’re just people that are trying to help keep our campus community safe.”

Despite a nationwide decrease in those pursuing a career in law enforcement — a September study by the Police Executive Research Forum showed a 63 percent in recruitment over the past five years — both Garman and Piepmeyer said their work has only reinforced their desire to enter the field.

“We’re able to see at least part of behind the scenes and just really get to know the, I guess, the stigma in the community from a different side and a different perspective,” Garman said.

[Read more: Meet Spud, a good boy who will soon be the youngest dog in UMPD’s K-9 Unit]

In recent years, allegations of police brutality and racial profiling have made national headlines, such as with the deaths of Freddie Gray and Eric Garner. In 2015, Gray, a black man, died from a spinal cord injury sustained in police custody in Baltimore; in 2014, Garner, who was also black, died after a New York police officer choked him during an arrest.

No officers were found criminally liable in Garner and Gray’s deaths. Cases such as Garner’s and Gray’s, however, have sparked nationwide protests on the role of policing.

Piepmeyer said he thinks University Police are doing their best to combat a growing negativity surrounding the profession.

“It’s not like the police culture is saying, like, all of these things are okay,” Piepmeyer said of recent controversies involving police officers. “Everyone at this department is saying, ‘No, we need to train for this, we need to have the diversity in the training so we know those things aren’t okay.’”

Dykstra, who became a police aide in 2007 after transferring to this university, recommended that any student become a police aide, adding that many of his friends he made through the program still keep in touch — and he even shares a tattoo with one of his former fellow aides. His time as a police aide gave him a broader perspective on what police work entails, he said.

“I think that as a ‘regular student,’ if you are trying to stay for the most part out of trouble you rarely, if ever, interact with police officers,” he said. “So I was kind of at a loss for how much the department truly does.”