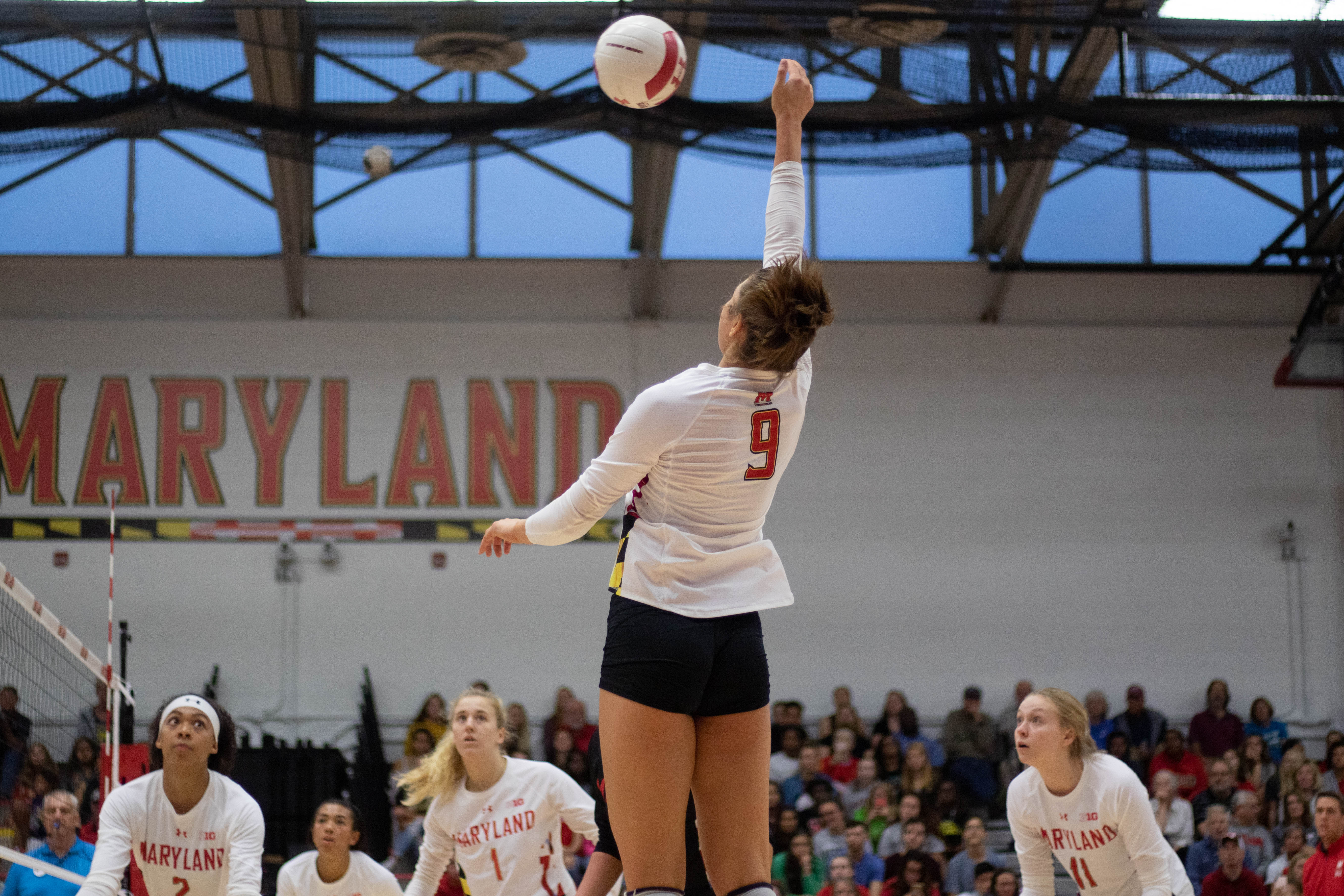 After a powerful kill from Maryland volleyball outside hitter Erika Pritchard in the third set against Michigan, coach Adam Hughes clapped his hands and shouted, “There we go, EP. There we go.”

Pritchard’s kill tied the frame at three, capping a run of three straight points after falling behind early in the set. Following tough matches last week in which she was held at or below .103 in both losses, Pritchard bounced back, totaling 13 kills against the Wolverines.

Maryland played Michigan tough out of the gate, and it jumped out to a 10-7 lead early on. However, after a call was overturned in the Wolverines’ favor to make it 12-8, the Terps (8-7, 0-3 Big Ten) never recovered.

The team dropped set one 25-17, and four of its 17 points came on service errors from Michigan.

“We shot ourselves in the foot with a bunch of errors early on,” Hughes said. “Things kind of slipped there in the first.”

Maryland led for much of set two, thanks to a strong start from Pritchard. The pin hitter was at the net for almost every play, and she ended the set with three kills, tied with outside hitter Rebekah Rath for the team lead in the frame.

Michigan (10-3, 3-0) knotted it up at 18 and went on to win seven of the next 10 points, with outside hitter May Pertofsky notching two kills down the stretch — part of her 11-putaway performance.

“We knew where the ball was going,” Hughes said. “We just didn’t make plays when we needed to make plays.”

After Maryland lost its fifth set in a row dating back back to Saturday’s defeat against Michigan State, the Terps looked defeated toward the beginning of set three. But big plays from Pritchard and Rath brought them back into it.

Both teams exchanged points late in the set, and the game went past the 25-point mark. In the end it was a service from Pertofsky, one of her four, that clinched the set and match for the Wolverines.

“We had some streaks that gave us some momentum,” Hughes said. “But at the same time, we had some opportunities to finish there at the end.”

Michigan’s primary trio of outside hitters — Pertofsky, Sydney Wetterstrom, and Paige Jones — buried Maryland on Friday night at the Xfinity Center Pavilion. They combined for 41 kills en route to a 3-0 victory, leaving the Terps with a rematch against Michigan State on Saturday and still searching for a conference win.

“Tomorrow’s a new opportunity,” middle blocker Katie Myers said. “We need to watch what happened tonight and learn from it.”