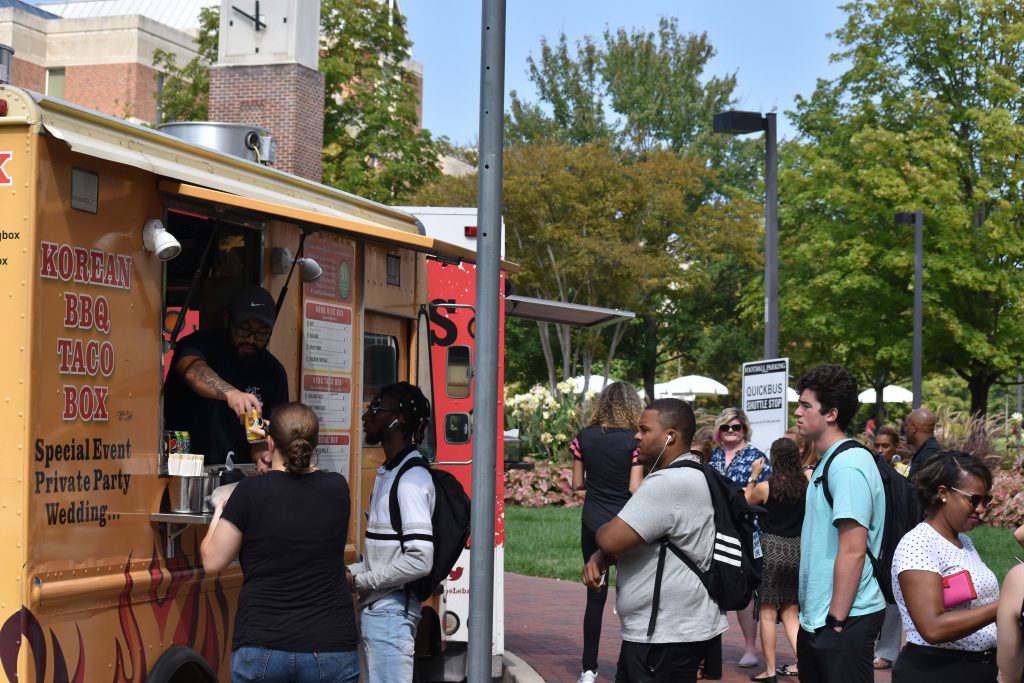 Students wait in line at the Fall Food Truck Festival in front of Van Munching Hall on Oct. 2, 2019. (Jordan Swarm/For The Diamondback)

By Jordan Swarm
For The Diamondback

Despite the high temperatures, about 150 people snaked from Mowatt Lane to the lawn of Van Munching Hall Wednesday for the first Fall Food Truck Festival.

The event was hosted by the business school as a rebranding of “Food Truck Thursdays,” a previous biweekly event the school would hold in the warmer months.

Marlo Smith, an event coordinator in the business school’s office, came up with the idea as a way to bring business students — and the rest of the campus community — together to try new foods and enjoy each other’s company outside of the classroom.

“Smith is pretty isolated on the south side of campus. We have to bring diverse dining options to us, and what better way to do that than food trucks,” Smith said.

The festival hosted three food trucks: Roro’s, a Mediterranean truck; KBBQ Box, which served Korean-American food; and Funnel Fare, which offered desserts and lemonade. Vendors shouted updates about what items they were running low on to the waiting hungry crowds.

After going through a list of more than 20 vendors, the business school secured their goal of booking trucks with a “diverse” range of food types, Smith said. Prince George’s County requires a separate permit to even sell in the county, so all the trucks interviewed had to be willing to secure a temporary permit.

When she chose the trucks for the event, Smith said she wanted to make sure there were restaurants that could accommodate students with plant-based diets, so as to include as many people as possible.

Michelle Hodge, a senior environmental science and policy major, said she was impressed by the vegan Beyond Burger she ordered at Roro’s, as well as the event as a whole.

“My friend found out about [the festival], and I came out because of her,” Hodge said, adding that her burger was “really, really good.”

Michelle Lui said she found out about the event through the business school, and she decided to invite her roommates out to get lunch.

“We normally get lunch at this time anyway, so we wanted to switch it up,” said Lui, a sophomore who is undeclared in the business school.

Smith said the business school hopes to hold a food truck festival each semester with the goal of bringing people outside and taking time to relax and enjoy lunch.