The significance of a j-hope and Becky G collaboration 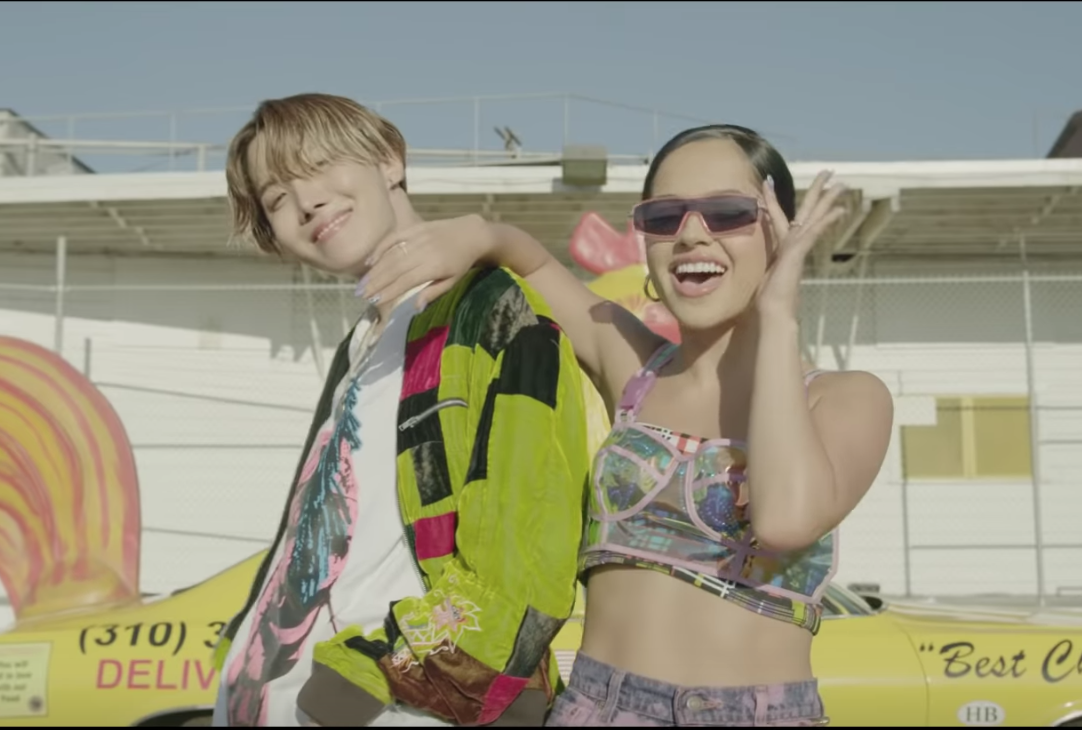 Becky G and j-hope in the music video for the song 'Chicken Noodle Soup' (Photo via YouTube.)

When I was in kindergarten, I came home every day to my after-school snack — my Croatian grandma’s homemade chicken noodle soup. Growing up first-generation in the United States shaped a large part of my identity. At home, I was in Serbia, and at school, I was in America.

It was normal for me to have “weird” lunches and answer the phone in a different language because my parents were calling. It was also normal to be obsessed with Snapple and play the Hannah Montana soundtrack on repeat until my parents couldn’t take it anymore. I recognize that this experience may not be unique to “first-generation kids,” but I want to paint a picture.

I specifically remember my dad playing the same CDs in his car for months on end. And I always learned the lyrics, even though a lot of them weren’t in Serbo-Croatian or in English. They were in Italian, Spanish, French and even Mandinka. In retrospect, this probably primed my future interest in K-pop.

So, when I saw that j-hope of BTS — one of the most popular K-pop groups in the world — came out with a song featuring “Shower” singer Becky G, I was both confused and elated. BTS has been on hiatus for the past month or so, but our hope, j-hope, never rests! Last Friday, j-hope released a song and music video called “Chicken Noodle Soup,” based on the 2000s hit of the same name by Webstar and Young B featuring AG aka The Voice of Harlem.

OK, OK, but why does this lighthearted song about chicken noodle soup matter? Short answer: because it is a powerful merger of cultures. Let me explain.

K-pop has launched itself into the public eye of the West slowly and steadily over the past decade, with PSY’s “Gangnam Style” as its first global phenomenon. Now the genre has come to a fever pitch with BTS becoming the first Korean group to win a Billboard Music Award.

We could argue that Latin music has done the same thing — slowly creeped into the American music consciousness with hits like “Vamos a la playa” and the record-breaking earworm that is “Despacito.” Becky G, once known as a one-hit wonder for her song “Shower,” created a career for herself in Latin urban pop alongside artists such as Maluma and J Balvin, when top 40 pop didn’t work out for her.

Now, I mentioned earlier that I was confused when this song first came out. I wondered, “What do j-hope and Becky G have to do with each other? This is so random.” But since then, my friends, I have realized it is SO NOT RANDOM. It is, in fact, genius.

By having a Korean pop star and a Latin pop star perform a song together, music executives are basically combining the power of the two largest fandoms in the world. According to Rolling Stone, Latin music dominated YouTube in 2018. And you can take one look at YouTube’s most played K-pop music videos of all-time list to notice how many of those in the top 10 came out in the last two years. K-pop was even (clumsily) referenced in the latest YouTube Rewind.

Bottom line: Lots of people watch and listen to both Latin pop and K-pop, and I’m sure there’s a lot of crossover as well. I’ve seen plenty of Spanish and Portuguese comments left on K-pop videos before, so “Chicken Noodle Soup” is probably successfully tapping into that fan base. Not to mention, the fact that this song is a remake gives a nod to the genre K-pop borrows a lot of inspiration from: hip-hop.

Aside from the numbers, I want to address the part of this that I believe is the most significant: This song is trilingual. We got English, we got Korean and we got Spanish! There’s something so special about watching people from different backgrounds come together to make art, and having relatively high-profile artists doing it is even more moving. It makes you feel like, “Yeah, we might be different, but there is something that can unite us all: music.”

As a first-generation kid in America, I’ve always been wary of the salad bowl versus melting pot debate. I still haven’t decided which our country is, but when this kind of art is made, it makes me think it’s possible to have an international melting pot.

Every culture is different, but the most exciting part of culture is being able to share that with others and celebrate it. “Chicken Noodle Soup” does exactly that — and it gives me the warmth that I felt while eating my grandma’s soup.