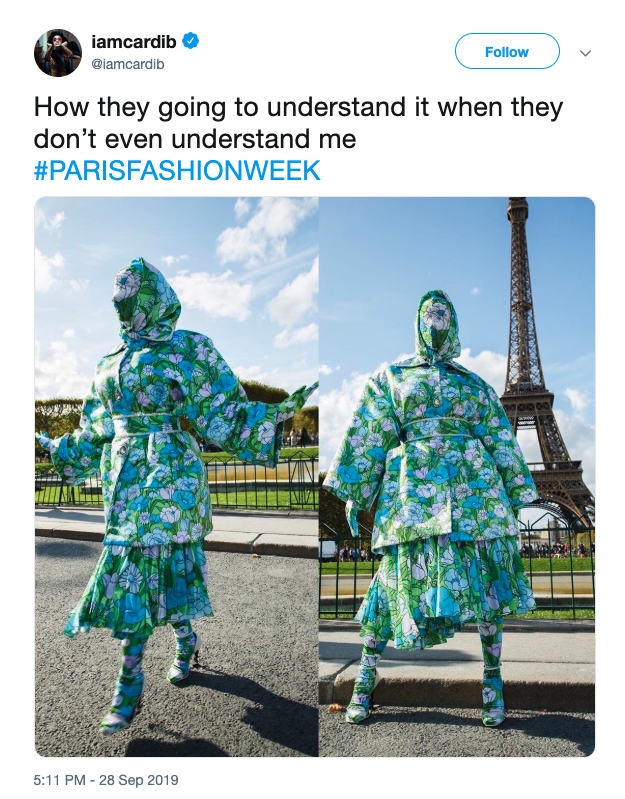 Rapper Cardi B shared a video and photos of herself on social media in a fully-covered floral outfit for Paris Fashion Week (Screenshot of @iamcardib's Twitter).

Cardi B showed up to Paris Fashion Week in a floral look that covered every inch of her body, including her face. The outfit, designed by Richard Quinn, caused quite the controversy considering France’s ban on full-face veils, effectively preventing Muslim women from wearing religious garments such as burqas and niqabs.

Cardi B posted a video of herself walking across a street near the Eiffel Tower making jokes about how she couldn’t see. Many were amused by it, including former Game of Thrones actress Nathalie Emmanuel. However, Emmanuel also quoted Cardi’s tweet to remind people that Muslim women are not allowed to wear similar garments despite its significance to their faith; those who do face a fine of 150 euros.

Gwaarrrn @iamcardib!! I hope this reminds people that Niqabs are banned in public places in France & come with a fine of up to €150. https://t.co/SGlGRRVTnb

Some suspect that Cardi B’s choice of dress was an act of civil disobedience to protest the full-face veil ban. While I do not subscribe to that school of thought, I do agree that this exposes double standards of high fashion and the international, unfounded fear of Muslim people.

French government officials claim that the goal of the ban is to ensure complete separation of church and state and to allow all women to be engaged French citizens. Former French President Nicolas Sarkozy has expressed that being engaged with fellow citizens involves being face-to-face in the public sphere. If that is truly the purpose of the ban, shouldn’t people be able to decide whether they want to engage with others?

What it looks like to me is that when a Muslim woman wears a niqab or burqa, she is targeted by their government as being anti-France, but when a celebrity wears a garment that similarly covers her entire body in the name of high-fashion, she is praised, accepted, and not fined or seen as anti-France.

One could also argue that because Cardi B is not a French citizen, she has no allegiance to the country and, therefore, is not obligated to put France before her religion or, in this case, style of dress. However, the law is not exclusive to French citizens, so that argument would be void.

Others claim that Cardi’s case is different because it’s Fashion Week, so her outfit can be considered a costume or artistic expression — and it’s no secret who’s under all that fabric. I don’t quite agree with this because the ban is written into law to be neutral. Yes, it obviously targets women of the Muslim faith, but technically speaking, the ban is on all face coverings, not niqabs and burqas specifically.

Therefore, if the goal really is to maintain the French identity — which is problematic in itself — and foster engagement among people, then the law should be universally applied. When that does not happen, it becomes even more obvious what the true objective of this ban really is.