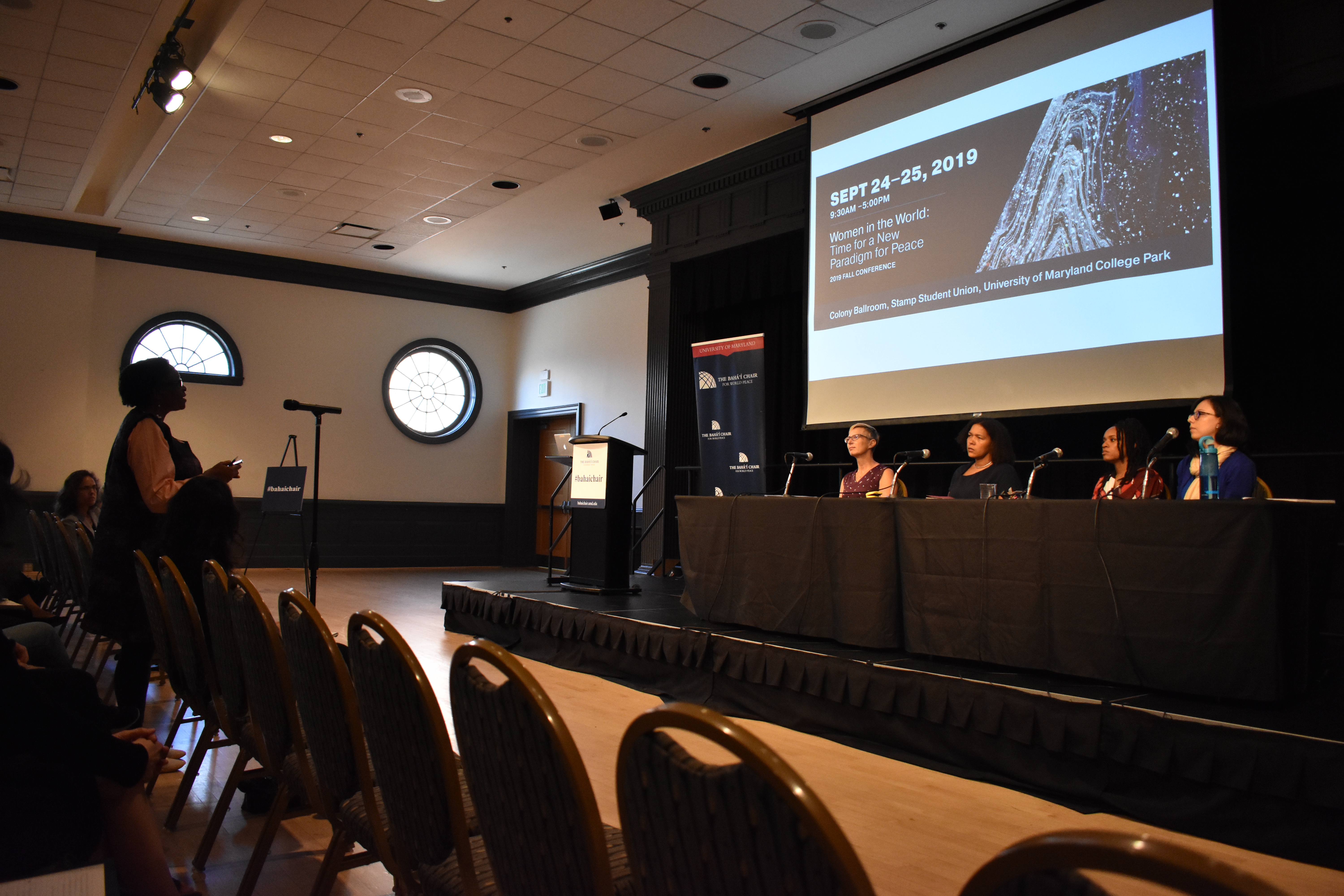 Rebecca Jordan-Young, Dawn Dow, Cecily Hardaway and Monica Caudillo receive a question from the audience during the Bahai Chair for World Peace event on Sept. 25. (Madison Peek/For The Diamondback)

When University of Maryland professor Hoda Mahmoudi began to write a sociological article about freedom and Iranian women, it resonated with her.

Born in Iran, Mahmoudi said she understands the importance of freedom and self-expression for women across the globe.

“Self expression for Iranian women and many many women around the world can be a matter of life or death,” said Mahmoudi, who serves as the Bahá’í Chair for World Peace at this university, during her opening remarks at the program’s fall conference Tuesday at Stamp Student Union.

The two-day event ⁠⁠— “Women in the World: Time for a New Paradigm for Peace” ⁠— concluded Wednesday after it brought together 14 female professors from across the globe, serving as keynote speakers, lecturers and panelists as a part of a larger conversation on the diverse issues women face today.

This year’s conference focused on the particular barrier of gender inequality, promoting the group’s “vision for world peace, which is very complex, through an intensive learning process,” Mahmoudi said.

The conference delved into the complex issues surrounding gender equality for a variety of women; topics ranged from black mothers in the workforce, to the psychology of male and female brains.

The event also covered how gender inequality is not just an issue for women — it can negatively affect both women and men. And Dawn Dow, an assistant sociology professor at this university, discussed the powerful effects gender inequality can have on African American men and women specifically.

Rebecca Jordan-Young, a women’s, gender and sexuality studies professor at Barnard University, discussed the cultural and biological effects of testosterone on gender inequality and the complexity of the different factors that contribute to understanding testosterone’s impact on society.

“We look at the interplay between studies on [testosterone] and aggression … and the concurrent public discourse on violence as a social problem, especially with class and race politics,” Jordan-Young said.

Kathryn Obisesan, a senior economics and government and politics major and recent Bahá’íChair intern, said it was important to host the event at this university.

“Not everyone has the opportunity to leave the country or to be in environments where they are attracting people who have diverse perspectives,” Obisesan said.

As the conference ended, Jordan-Young stressed the importance of creating a more inclusive society and deconstructing stereotypes, but acknowledged the difficulty in doing so.

“It seeps into our consciousness, and its part of what makes us, on a fundamental level, believe and tell each other that the world is how it is, because of our biology and that our stereotypes … is somehow grounded in something real and material,” Jordan-Young said. “So, let’s just stop. Let’s stop doing it. Let’s call it out.”