For some women at last week’s protest, removing their shirts meant taking back control 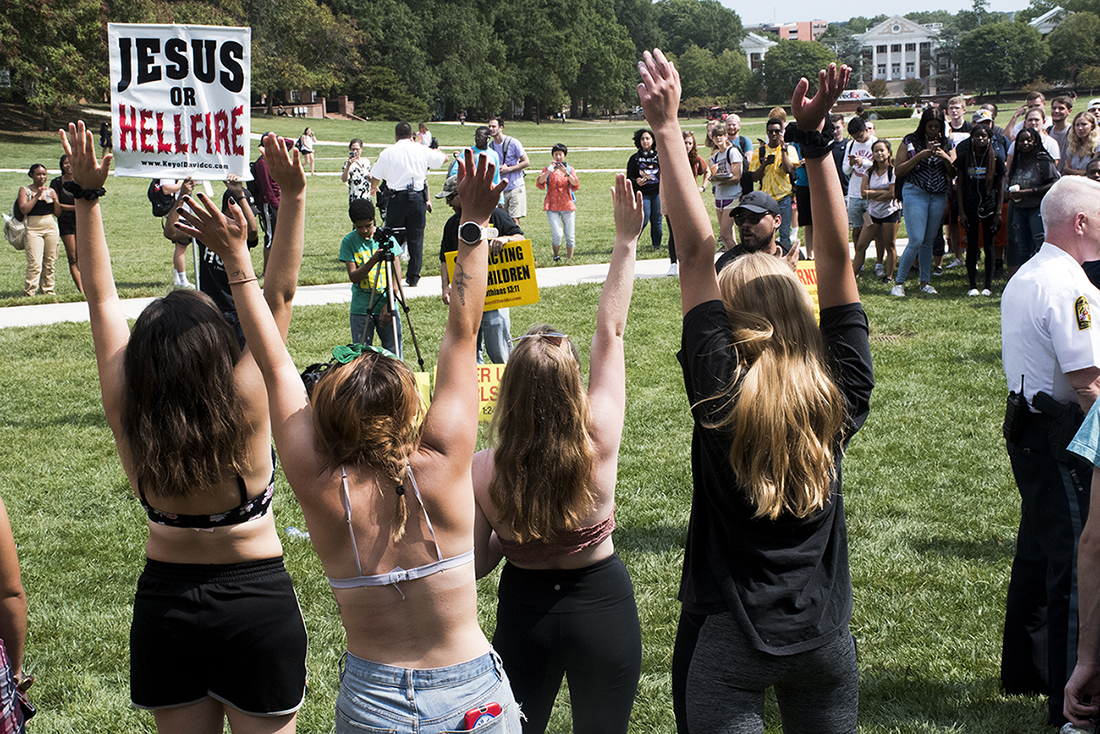 A group of women removed their shirts in response to radical religious demonstrators at the University of Maryland last week. (Carmen Molina Acosta/The Diamondback)

Catherine Oberfield stood glaring at the man in front of her, her body shaking with anger but her gaze steady.

Standing in a line of several other women, all of them in their bras with their middle fingers in their air while the man — a radical religious demonstrator — called them “whores,” Oberfield listened.

And then, she decided she had listened enough.

“I was inspired by the sign that said ‘Cover up girls,’” the psychology major said. “I was like, ‘Oh, let’s do the exact opposite.’”

Her legs trembling, she stepped out of the line of women and threw off her bra.

Last week’s protest, when demonstrators from the Key of David Christian Center were confronted by hundreds of University of Maryland students, saw no shortage of displays of activism. But many felt this moment was particularly powerful.

In the week and a half since, Oberfield said she’s received a flood of supportive messages from friends and strangers alike. They tell her time and time again how brave she is. But for her, and the women who stood beside her — many of whom have been harassed or discriminated against in the past — standing up was about more than bravery.

It was about taking back control, said Mackenzie Miller, one of the first women to take off her shirt.

The situation reminded her of middle school, she said, when one boy would call her a “slut” or a “whore” constantly. And even now, it’s not uncommon for men to make comments about her, she said — recounting a night when one followed her and her friends, asking why their boyfriends let them go out in the outfits they were wearing.

“All the time, girls are subjected to this,” she said, “It’s gotta end.”

After a video surfaced of the women’s response on a Twitter account with more than 1.8 million followers, hateful comments poured in, criticizing how they decided to protest. But if she were in the same position again, Oberfield said she would do the same thing.

“Yeah, I probably fucking would,” she said. “I know myself.”

And protesting through nudity, even if only partial, is common in countries like South Africa and India, said Ashwini Tambe, a professor in this university’s women’s studies department. It’s often used by women who aren’t being heard, Tambe said, as a way to protest gender-based violence.

The women at the protest seemed to be doing that, too, she said.

“They were sort of saying, ‘Look at how little we care or agree with you on your notions of honor and modesty,’” she said. “‘The culture of shame that keeps women silent is not something we abide by.’”

Sometimes, however, the tactic is “risky,” she said. It can easily be misinterpreted — leaving people to think that the women are presenting their bodies sexually, when their goal is to demonstrate against that very same objectifying behavior.

“Rules about decency — what is modest and what is decent — are heavily gendered in public spaces,” Tambe said. “There’s no way to predetermine how these tactics might be read … [it could] attract the gaze the women are there to protest.”

Still, it’s generally a successful strategy for getting a message across, she said.

“It is, of course, a dramatic tactic,” she said. “It becomes kind of a last resort — and it works.”

Oberfield described the decision as “an adrenaline rush.” She said it left her feeling like she might throw up.

But she stands by it.

“So many women have worked so hard for me to have a voice,” she said. “And if I’m not using it, shame on me.”

The Key of David demonstrators set up shop on McKeldin Mall for about three hours last week. They yelled that students were “sinners,” told women passing by that they’d be raped for the way they dressed, and hurled transphobic, homophobic and islamophobic slurs.

[Read more: Despite hateful rhetoric, the McKeldin demonstrators were allowed to stay. Here’s why.]

Though Miller is straight, her and a friend, who also took off her shirt in demonstration, decided to kiss to show their support for a nearby lesbian couple, while the man was yelling at them that they would burn in hell.

And Hugo Cantu, one of the only men that came up and took off their shirts, did something similar with his friend Jonathan Garcia — the two went up holding hands.

Garcia, who identifies as a gay Latinx man and works with the LGBT Equity Center and the NAACP, said he was initially worried about Cantu being judged — both for being perceived as gay and for supporting the women. He’s no stranger to prejudice, he said, adding that he is often judged for his sexuality and the way he speaks.

“It’s important to reach across the table,” he said, “and use your privilege to help.”

Despite the wide array of activism on display — including pride flags, handmade signs and no shortage of music — the women who removed their shirts were the most compelling for Alyssa Larsen.

Larsen, a senior animal sciences major, had just turned around to leave the protest and head to class when she saw them, standing there together. Eventually, she, too, stood in her bra before the demonstrators. And when she saw Oberfield take hers off, Larsen was almost in tears.

Their actions weren’t just inspiring, she said. They were necessary.

“We’re past the point of being appropriate,” she said. “In this context, appropriate would be submissive.”