Despite some laugh-out-loud moments, the ‘Between Two Ferns’ movie is mostly a flop 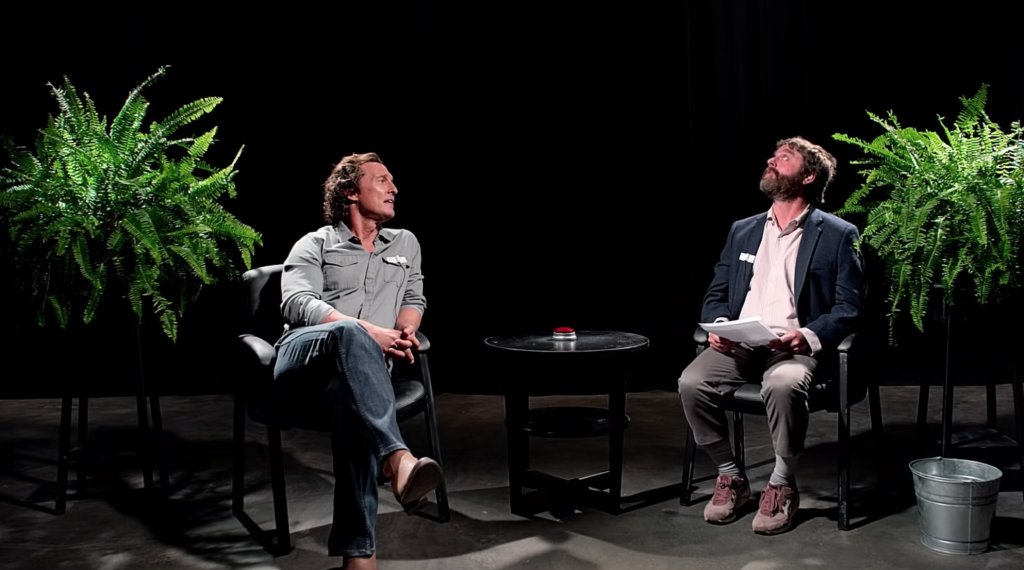 Matthew McConaughey and Zach Galifianakis in "Between Two Ferns: The Movie" (Photo via YouTube.)

From any of the nighttime talk shows to daytime television programming, it’s hard to ignore the predictability and overly-generated answers of celebrity interviews.

It’s all the same. That’s what makes Between Two Ferns a relief — it’s a break from the addicting yet soulless world of carefully crafted celebrities.

Between Two Ferns is special because, as far as interview shows go, it has no saving grace. It exists so that host Zach Galifianakis can mock celebrities to their faces, and celebrities can sometimes land a punch back; there’s certainly no lack of source material for a comedian who specializes in self-deprecating physical humor.

The new Netflix mockumentary, Between Two Ferns: The Movie, recognizes that unique flavor and aims to ironically wax poetic about it. But while the show clearly understands its role as the breath of fresh air among cheesy interview shows with laugh signs and TV host personalities, the movie milks this small piece of significance until you’re ready to kill it off.

Zach Galifianakis is the poster child for so-so male comedians who land big roles — presumably based on the fact that they don’t shower, and are proud of it. He thrives in the world of rude jokes at the expense of others and himself, because he’s willing to look stupid for the camera. It’s what created his career.

The mockumentary follows Galifianakis and his crew on a frantic road trip as they try to complete ten celebrity interviews in two weeks so they can officially leave the internet behind and go on air. The interview clips and the end credit blooper reel are hilarious as always, featuring Galifianakis’ trademark deadpan and a plethora of increasingly uncomfortable celebrities.

The rest of the film, however, quickly wears its narrative style thin. Galifianakis pushes us a watered-down Michael Scott character, but with fewer acting props or clever lines. The schtick is funny for the first half an hour, but the movie is at least 45 minutes too long.

Lauren Lapkus, who plays Galifianakis’ bubbly assistant Carol, is lovable but one-dimensional. Even for satirical comedy, it helps for the characters to have more of a stake than being relegated to the cheesy comedic ensemble. Between Two Ferns: The Movie rushes through jokes about character tropes: the assistant coming to terms with her individuality, the leader doubting himself in front of his crew, an emotional sob scene in the rain. It feels like Galifianakis is screaming his jokes at us, like a first attempt at satire, or a sloppy first draft.

Unique interpretations of an old format is what Between Two Ferns fans have come to expect, and the new movie didn’t deliver. Galifianakis and his crew were right at home while nearly murdering Matthew McConaughey on set and stealing from Peter Dinklage’s mansion during his interview, but they were much less compelling in drawn-out car trip scenes and conversations around an array of dinner tables.

While Galifianakis may have been trying to break out of the overly predictable formulas he criticizes TV talk shows for, he succeeded in showing his limited range. As an interview show, Between Two Ferns is unmatched — but the mockumentary genre has seen better days.