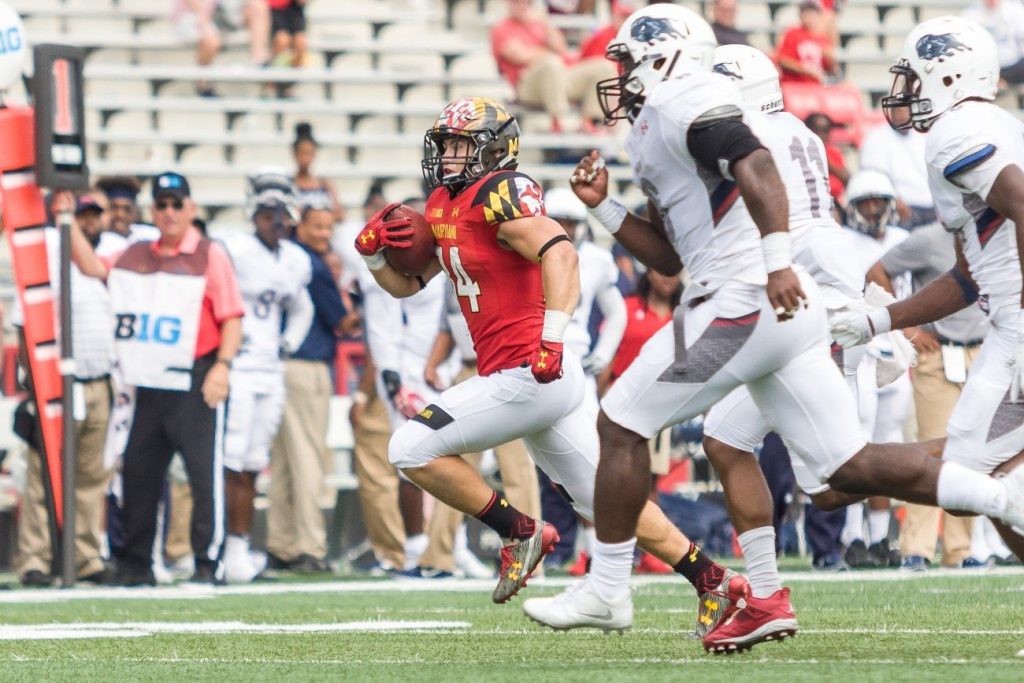 Running back Jake Funk sprints past defenders for a first down in Maryland’s 52-13 victory against Howard University on Sep. 3, 2016 at Maryland Stadium. (Marquise McKine/The Diamondback)

Maryland football running back Jake Funk tore his left ACL against Temple and will miss the remainder of the season, coach Mike Locksley announced Monday.

Funk tore the same ACL last November against Ohio State, but recovered in time to be a meaningful contributor in the backfield and on special teams this season. In three games, the redshirt junior carried 17 times for 173 yards and two touchdowns.

“Jake played an integral role not just on offense but on our special teams, so that’s a huge blow for us,” Locksley said.

During Locksley’s time as the Terps’ interim coach in 2015, he pushed to offer Funk a scholarship while he starred for Damascus High School in Montgomery County. While in high school, the running back garnered Maryland Gatorade Player of the Year honors.

When Locksley was hired to be Maryland’s permanent coach in December, he persuaded Funk not to leave the program.

“Don’t you dare enter the [NCAA transfer] portal on me,” Jim Funk — Jake’s father — recalled Locksley telling his son, in an interview with The Diamondback earlier this month. “I’ve got a role for you.”

After intense rehab sessions with Maryland’s staff and at his brother’s rehab facility, Funk returned to the crowded Terps backfield and carved out a role alongside Anthony McFarland, Javon Leake, Tayon Fleet-Davis and Lorenzo Harrison, all of whom have made impactful plays during their time in College Park.

But despite being further down on the depth chart, Funk’s effect on the offense was felt in other ways. In quarterback Josh Jackson’s brief time in College Park, Funk made a particular impression on the signal caller, he said

“He’s a big leader on the offense,” Jackson said. “He just brings a type of energy to the field everyday, he’s very consistent [and] he loves the game.”

Funk — who has served as team captain in two games this season — will now be relegated to the sideline. But his teammates know he’ll still have a role. After his torn ACL last year, Funk wore a coach’s headset on the sideline, recorded plays and gave tips to running backs — all of which led to his position group giving him the nickname “Coach Funk.”

“I know Jake. He’s still going to be a good leader, being on the sidelines talking to us,” Leake said. “I know Jake’s upset right now, but it’s definitely more to come for Jake.”

With Funk’s injury, Locksley expects Harrison’s role to grow. Harrison has been recovering from a hamstring injury in the early stages this season, but the first-year coach says he’s healthy and ready to contribute as a rotational running back and on special teams.

Harrison has rushed for 1401 yards and nine touchdowns since arriving in College Park in 2016.

“As we say with most injuries, the next man up mentality has to take place,” Locksley said.