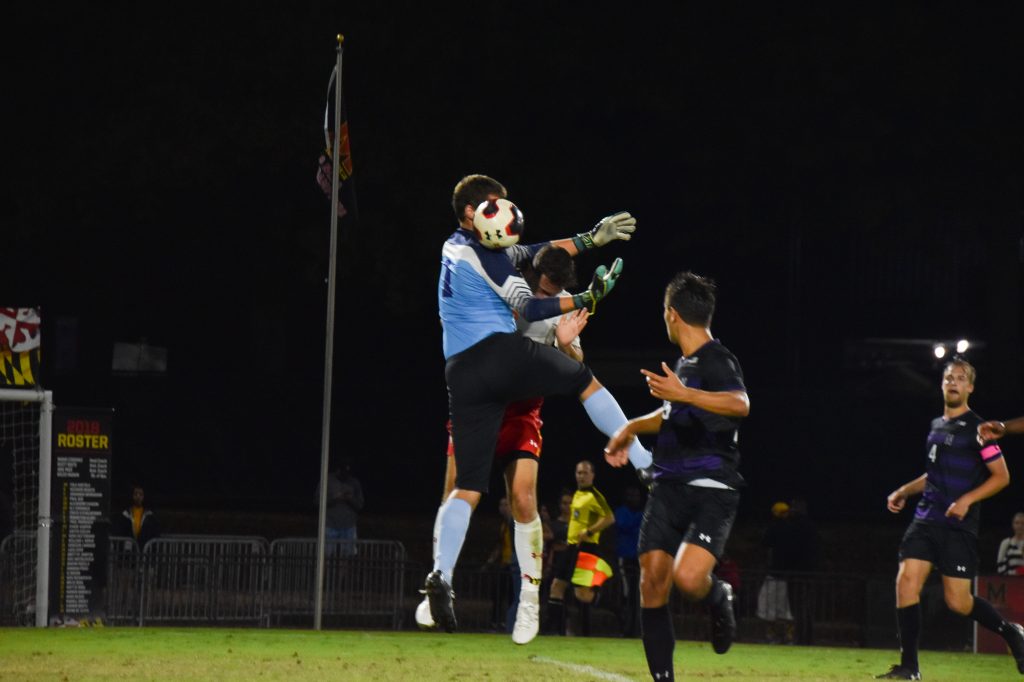 With just over four minutes remaining for Maryland men’s soccer to find an equalizer Friday against Northwestern, midfielder Nick Richardson whiffed on an attempted pass back to goalkeeper Russell Shealy.

Richardson fell to the ground after his gaffe and watched helplessly as Wildcats forward Ty Seager gathered the ball inside the box. And when Seager’s chip found the back of the net to seal the 3-1 victory, Richardson dropped his head in disappointment from his crouched position on the field.

Seager’s score was the third out of three goals the Terps surrendered Friday night because of a mistake, continuing a trend that has plagued coach Sasho Cirovski’s team in its 3-3 start to the season.

“In all of our losses so far, we gifted some goals,” Cirovski said. “We have to stop being so generous. We have to make teams earn it a little bit more.”

Mistakes loom larger for a team with an attack that’s produced an average of one goal through the first six games of the season. In each of Maryland’s three defeats, those lapses have been the deciding factor for the Terps.

Against Virginia on Sept. 2 — Maryland’s first defeat of the year — goalkeeper Niklas Neumann initially saved a shot but a defender wasn’t able to clear the ball in time before forward Nathaniel Crofts knocked in an easy goal.

The errors were more glaring in the Terps’ 3-2 loss at UCLA Sept. 6. Bruins forward Milan Iloski ended with a hat trick, enabled by Maryland’s miscues.

Goalkeeper Russell Shealy was in position to stop Iloski’s first tally but instead failed to squeeze the shot that wound up trickling across the goal line. On UCLA’s third goal, Shealy had a ball played back to him bounce precariously out of his reach, allowing Iloski to gain possession and get an open shot from close range.

Those blunders spoiled the attack’s best performance of the season, as it netted two goals and constantly threatened the Bruins.

“When you go on the road and you put a performance in like we did, and you score two goals on the road, we should come out of there with probably a victory, minimally a tie,” Cirovski said Sept. 10. “UCLA was very opportunistic on some chances.”

Following those losses, the defense shored up its issues to stifle Akron and Villanova in two consecutive shutout victories.

In the fourth minute, Wildcats midfielder Matt Moderwell drove a hard pass along the ground into the box. Marques Antoine and Johannes Bergmann, Maryland’s center backs, failed to clear the ball out of harm’s way, and Shealy couldn’t stop it from going all the way to the far post, where midfielder Bardia Kimiavi canned the open shot.

During the second half, after the Terps had leveled the score, Moderwell floated a cross into the box that sailed toward Shealy. But the goalkeeper was indecisive and mistimed his leap, allowing the inadvertent shot to find the back of the net.

Richardson’s errant pass late in the game sealed the result for a disappointing showing from the defense, the first of its kind at home this season following three clean sheets.

“I think it was just a little miscommunication today,” defender Matt Di Rosa said. “We weren’t as connected as we wanted to be.”

Maryland returns to Ludwig Field Monday night against undefeated No. 9 St. John’s, where Cirovski’s squad will look to rebound quickly from a lackluster performance riddled with mistakes.

“We’ll focus on our next game. Review this game, what we did wrong and just come out stronger,” forward Brayan Padilla said.