Everyone at UMD should take part in the climate strike 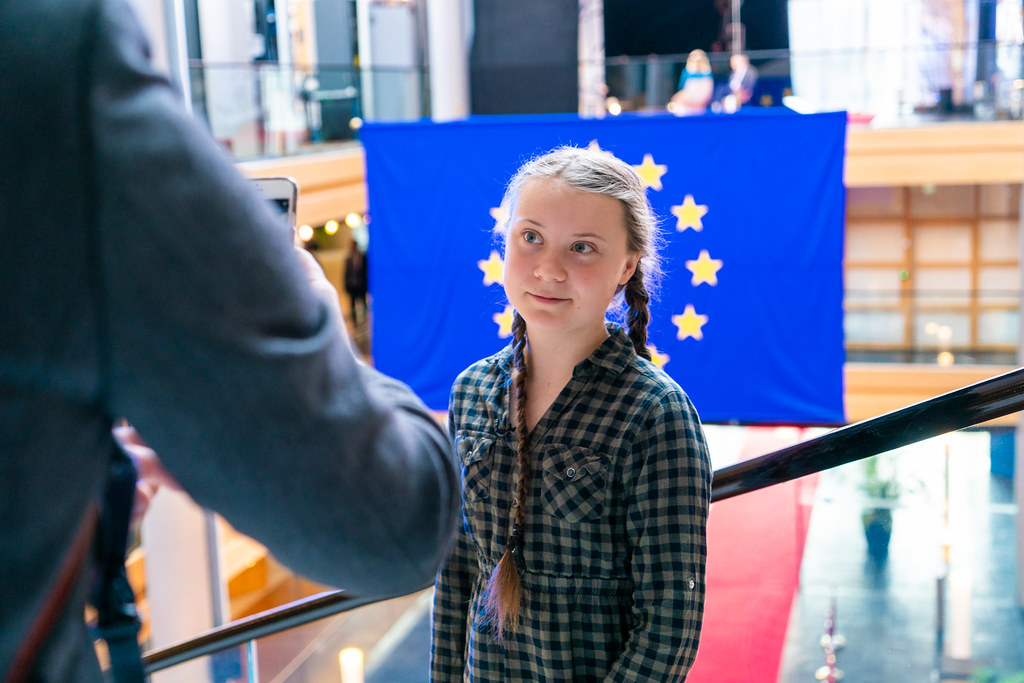 Greta Thunberg at European Parliament in April. Photo via Flickr.

On Sept. 13, Greta Thunberg, a 16-year-old Swedish climate activist who began the Fridays for Future movement, joined thousands of climate activists from Washington, D.C., outside the White House. She spoke in front of the U.S. Senate climate crisis task force and House Committee on Foreign Affairs this week, providing what is likely the most powerful eight sentence testimony in U.S. history.

This week was an incredible groundswell for the climate movement, and it’s building toward the Global Climate Strike today — which is expected to be the biggest climate action in world history. The climate movement at the University of Maryland is mobilizing to join this strike for climate action. As one of the organizers of the strike for this university, I believe climate change is at the heart of the issues will face the rest of our lives.

Students are not the only group on-campus affected by the climate crisis. For example, university groundskeepers spend hours each day outside maintaining the beauty of the campus and their working conditions will only grow more intense as summers get hotter and more humid, rain and snowfall intensifies and disruptive storms become more frequent.

This is why American Federation of State, County and Municipal Employees Local 1072, the labor union representing this university’s staff, has come out in support of the students striking. Just as the Green New Deal aims to tie together the common causes of the environmental and labor movements, AFSCME’s support shows that students and workers are both fighting for a livable future.

Over the long term, both groups will face higher education budget cuts as our governments are forced to devote increasingly larger portions of the tax pie to climate mitigation, adaptation, and disaster relief. Another columnist made the argument last week for a unified campus movement for an increased budget.That coalition will only become more necessary to combat the inevitable austerity resulting from the climate crisis.

Beyond future public budget fights, climate activists have three demands of this university that will ground the work the campus movement does following the strike.

First: committing to a sustainability education requirement for all incoming students.
With the climate crisis as the defining issue of our generation, learning how to live sustainably is a critical foundation students across all disciplines must share. Just as students from many different backgrounds and upbringings need a common understanding of positive sex, drug and alcohol practices when they arrive to campus, we need a similar basis of practices on how we can mitigate our climate impact and adapt to the impending reality of consumption constraints.

Second: ending the university’s use of natural gas and transitioning to a clean energy grid.
In 2017, the university released its Climate Action Plan 2.0, providing an update on its climate targets and strategies to get there. Many have noted the planned continued reliance on the combined heat and power plant (CHP).

But rather than relying on “improved efficiency” goals and carbon offsetting — where institutions pay for the social cost of their emissions — this university should lead the way towards carbon neutrality as soon as possible because that is what the science demands of us.

In my time on this university’s campus, many groups have advocated for divestment. Despite commitment in 2016 to stop directly investing in oil and coal, the University System of Maryland Foundation, which manages the endowment, is still invested in index funds that profit from fossil fuels. The foundation has refused to set out a timeline and has not been transparent about its holdings, making the commitment unaccountable.

These demands constitute the three levels we ought to be thinking about addressing the climate crisis: individual, our community and the world at large. Only by addressing all three will we make the necessary changes to stay within our carbon budget.

For anyone who even remotely cares about the climate crisis and these issues affecting our campus, the climate strike is the most impactful way you can do your part. But the climate movement doesn’t start Friday and it won’t end Friday. We need to build the student and worker movement that demands a university, economy and world that is livable for us all.