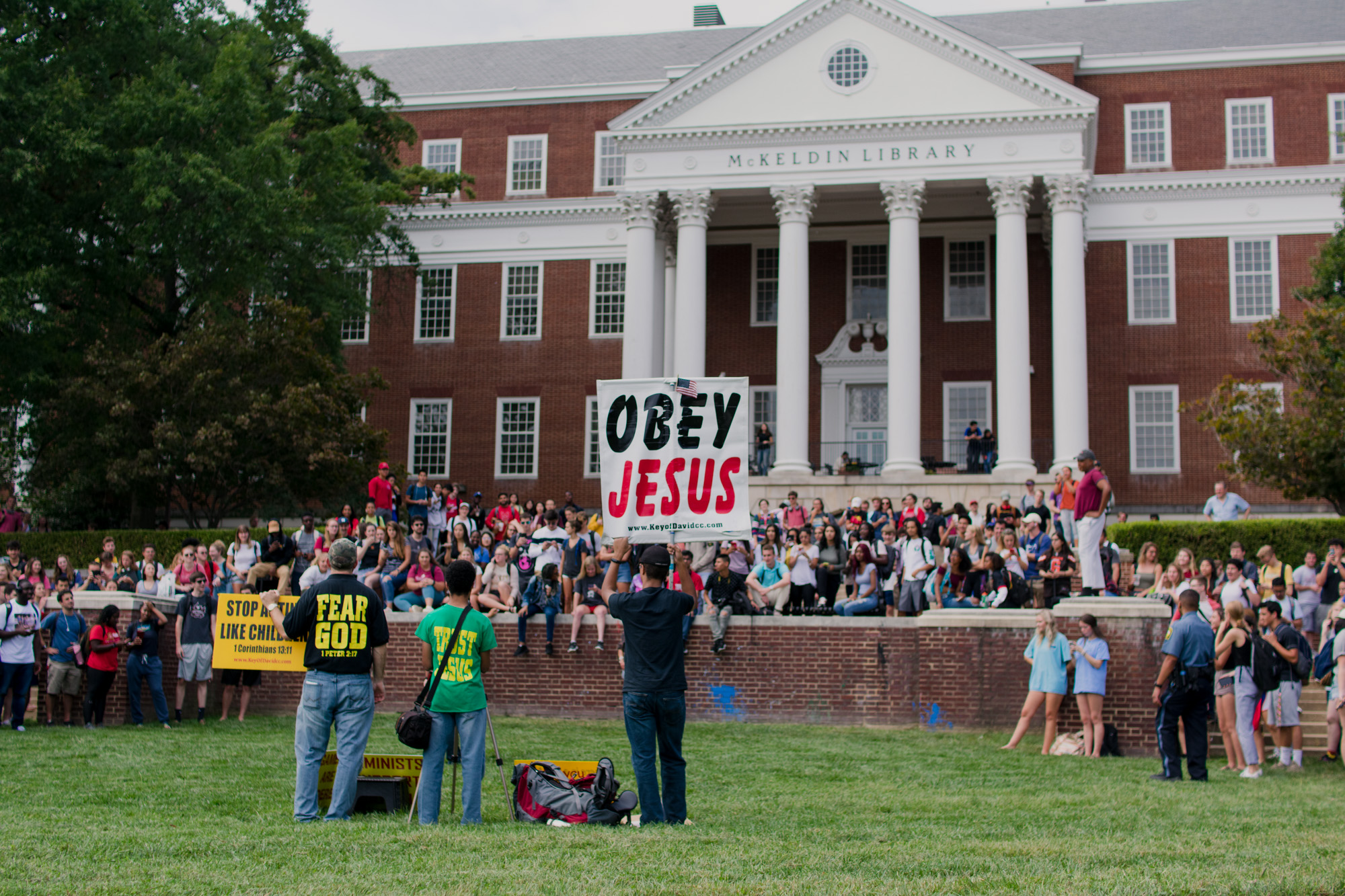 There are few times at the University of Maryland when the student body comes together for a cause. What happened on McKeldin Mall Tuesday was something I wasn’t sure the students of this university were capable of.

As four demonstrators from the Key of David Christian Center stood on the mall passing judgment on women, Muslims and LGBTQ people, this university’s students spontaneously gathered around them to show that this community is a safe space for marginalized students.

In a beautiful rejection of slut-shaming, Islamophobia and homophobia, students cheered, laughed and danced. Like many former and current students have expressed on social media, I’ve never been so proud to be a Terp. More importantly, however, these protests demonstrated the power of community action. As students, we were able to do what university administration failed to.

In the past academic year, the campus has grappled with this university’s inadequate response to the spread of adenovirus on campus, as well as football program dysfunction, both of which were linked to student deaths. And the protests and proposed football game boycott that occurred in response to the death of offensive lineman Jordan McNair were ultimately divisive in the student body.

This campus so often lacks a moral compass, usually because of the need to uphold free speech or protect this university’s reputation. So it was powerful to see students gathering to uphold a set of values Tuesday. Even if these students do not agree on other issues, they were all propelled by a desire to show that, at this university, people should be free to be themselves without fear.

I understand the argument that by counter-demonstrating, we only brought more attention to the Key of David representatives. That’s the classic dilemma when it comes to extremist thought in general — are we validating it or taking it seriously by arguing against it? However, the demonstrators may have had more success had the crowd not shown how unwelcome they were on campus. Any student who supports Key of David would likely feel uncomfortable expressing their views given the obvious backlash.

The Key of David Christian Center received similar reactions when it visited Saint Joseph’s University and Towson University earlier this year. The group, which is seen by many as a hate group, should not have been given a space to spread its vile views on any of these campuses, but students at all three rallied in — for the most part — peaceful ways.

While this was an extremely heartwarming event to witness, it also showed the importance of collective action — of coming together even if we don’t necessarily have a stake in the issue at hand. The students protesting were from a variety of clubs and social circles, and not all of them are regularly involved in activism.

Regardless of race, gender, sexual orientation, gender orientation or religion, we must always support and protect each other from ideologies that seek to oppress the vulnerable. This week, we stood in the face of hate and responded with love and music and acceptance; if this university can’t adequately protect the marginalized, let’s do it ourselves.