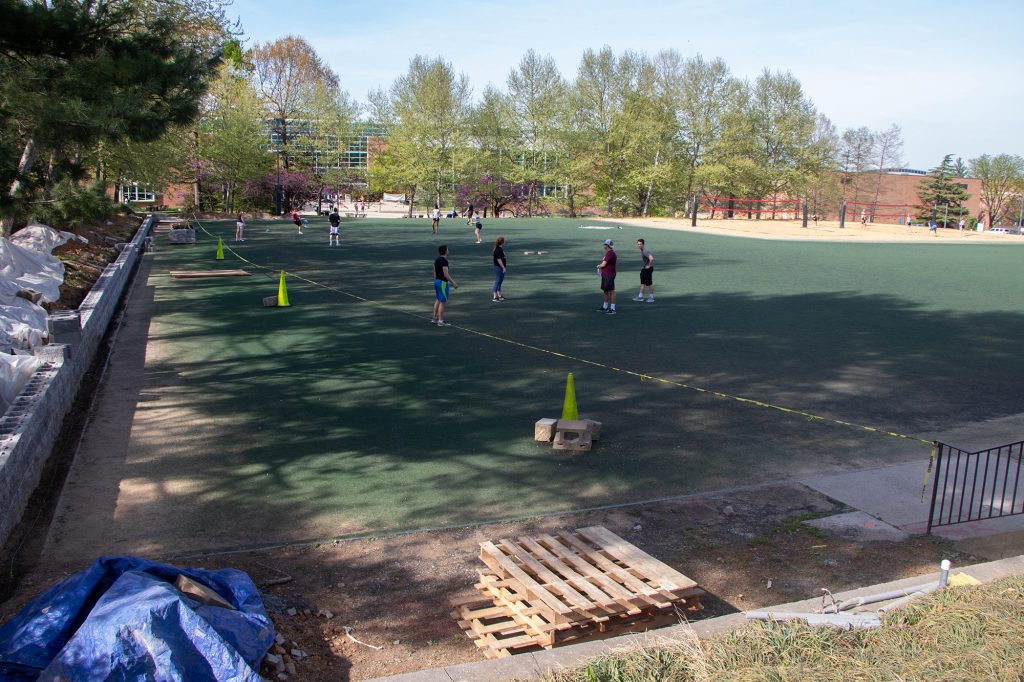 The about $400,000 project — headed by University Recreation and Wellness — is set to begin within the next two weeks and will replace the turf with a newer, more durable model.

The new field will have natural cork and coconut fiber infills instead of rubber pellets, allowing for a “softer, more user-friendly surface,” according to an email to North Campus residents from Christopher Moore, the administrative services assistant director for Residential Facilities.

Plus, the new infill is a natural product, so once the field is ready for its next renovation, the material can be used as a top dressing for grass fields or plant beds instead of being dumped in a landfill, said David Flumbaum, RecWell’s facilities projects and operations assistant director.

“If you played, you’d know that every time you went home from playing on those fields, you’d empty your shoes with rubber,” Flumbaum said. [The new field] is more environmentally friendly, it’s more sustainable. It should be cooler than the rubber.”

Construction will take place weekdays from 9 a.m. to 5 p.m. and will last about four weeks, weather permitting, according to Moore and Flumbaum. It was supposed to begin the week of Sept. 9, but the infill material is coming from overseas and was delayed, Flumbaum said. Moore sent a second email to North Campus residents Sept. 15, informing them about the delay.

As part of the construction, there will be LED lights installed around the field for increased lighting during events. Other small renovations include improvements for the beach volleyball courts such as replacing the perimeter edging and reinstalling the netposts.

Artificial turf fields often have an eight to 10 year lifespan, Flumbaum said. The university installed La Plata Beach’s turf in 2008, so renovations were to be expected. Before 2008, the university had used a grass field, which turned out to be impractical.

“It just got so much use that we couldn’t keep the grass,” Flumbaum said. “It was basically a mud field with sand volleyball courts next to it.”

The new field will also be usable in any weather and the new infill will have a similar lifespan to the rubber pellets, Flumbaum said.

The field sees large crowds of students when the weather permits — flocking to the area to play informal sports games like soccer and ultimate frisbee.

In his first few weeks on campus, freshman Lawrence Liu, a longtime soccer player, often went to the field to play pickup games.

“Of course I want them to replace the turf,” said Liu, a biochemistry major. “There’s definitely more places we can go to play.”

Freshman Tayo Ojo, an information science major who lives in nearby Centreville Hall, visits the field almost every day to play ultimate frisbee and flag football. He said the field’s central location on North Campus makes it an asset to students.

Like Liu, he said the inconvenience of the renovation would be worth it.

“I understand it,” he said. “It’s going to suck having to go somewhere else, but it’ll be for the better eventually.”