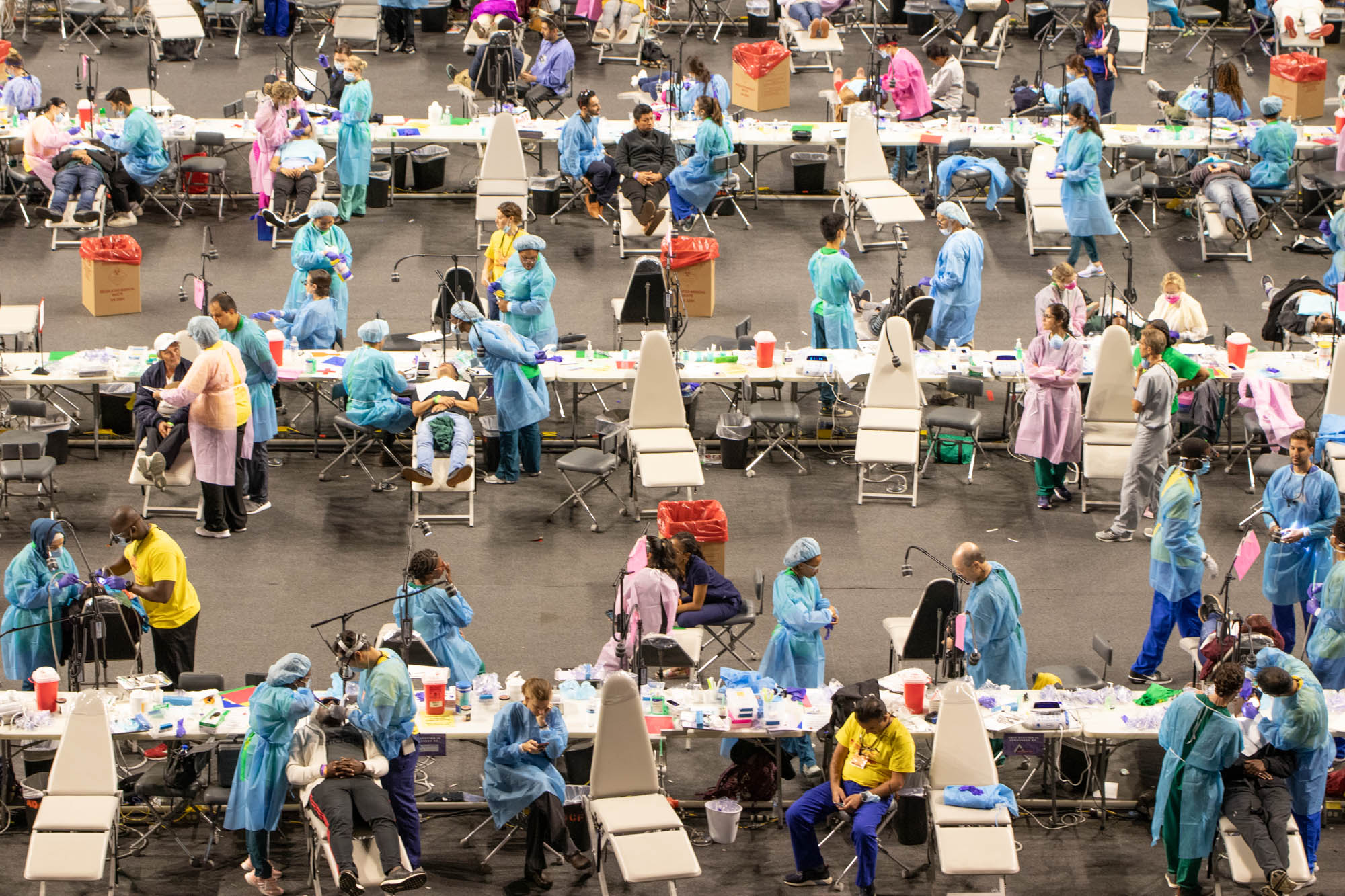 When the crowd started to gather outside the University of Maryland’s Xfinity Center at 11 p.m. on Thursday, it was raining.

Some pitched tents, one even brought a mattress. And by 5 a.m. on Friday, their ranks had swelled to around 700.

The people gathered there for the free dental clinic in the Mid-Maryland Mission of Mercy and Health Equity Festival — a two-day event that visits the university to provide care to the underserved and underinsured.

On Saturday morning, a line sprawled out the door and people waited for hours to be seen, said Surayyah Khan, a public health graduate student who helped organize the festival.

“It’s heartbreaking to hear about, but at the same time it’s heartwarming that we can do something to offer a full, free smile,” she said.

The event — which the public health school organized in partnership with Catholic Charities of the Archdiocese of Washington, D.C., and other dental agencies — transformed Xfinity’s basketball court into a massive dental clinic with over 100 dental chairs.

By Saturday’s end, about 1,200 people had been provided with nearly $1.5 million worth of dental care, Khan said. Funding for the event came from sponsors, including Cigna and Kaiser Permanente. Partner organizations, such as Catholic Charities, also raised money for the event.

“We end up with people who’ve been in car accidents and who’ve been victims of domestic violence,” said Thomas. “All of these services are offered to them at no cost.”

A dental crown — a “cap” placed over a tooth to repair size and appearance — can cost upwards of $600 per tooth, Thomas said. Two years ago, he said he met someone at the clinic who needed two crowns, but was only able to get one.

“I just saw her in line to get her second one done,” he said. “What does that tell you that someone has to wait two years to come back to the arena to get a crown?”

At the free clinic in 2014, about 58 percent of attendees were from Prince George’s County, which has some of the highest chronic illness rates in the state, according to the American Public Health Association.

People who visit the clinic don’t just struggle with their dental health, Thomas said. Some also have heart disease, diabetes, are at risk for HIV and face other conditions.

“Even though we are on campus, there’s a lot going on in the neighborhoods around us that we aren’t really aware of,” said Lawrence, one of almost 1,000 volunteers at the event. “We only hear about these kinds of disparities in the classroom and just talk about them, but seeing them here right in front of us is powerful and compelling.”

The court was marked off with stations dedicated to oral surgery, hygiene, sterilization and more. Many dental stations were also marked with pink signs that read “Spanish,” “Arabic,” “French” and “African dialect,” which signaled to patients that a translator was nearby. Students who studied in the Language House on campus and other volunteers provided translation services, Thomas said.

The event takes on a special significance in the current climate of the country, Thomas said.

“At a time where the country is so polarized on so many different levels, we still need to show that we can do big things,” he said. “And this is an example of us here at Maryland with our fearless ideas, doing big things.”