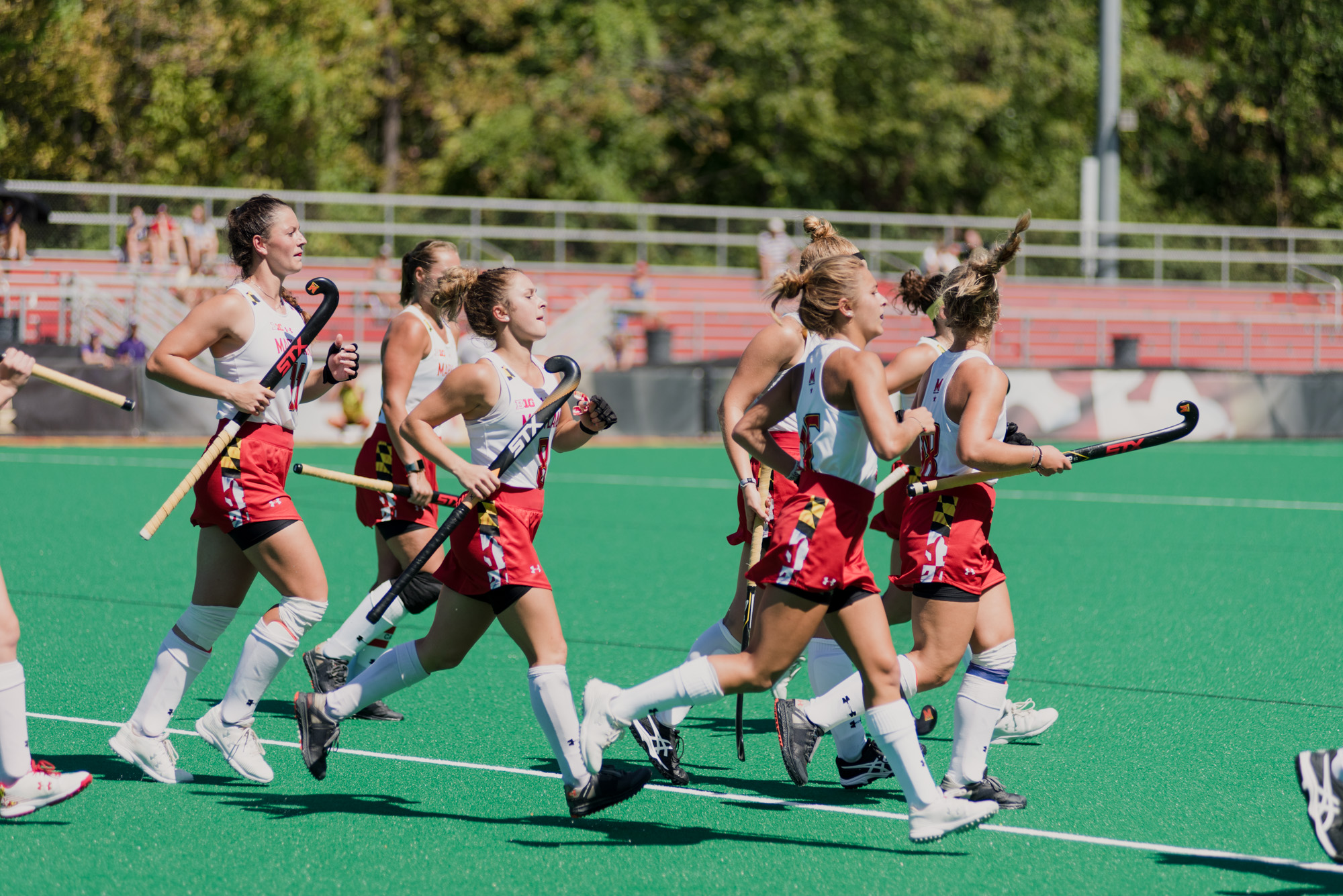 Maryland field hockey cruised to a 4-0 win over James Madison on Sept. 15, 2019, at the Field Hockey and Lacrosse Complex. (Gabby Baniqued/The Diamondback)

On Friday, Brooke DeBerdine and Noelle Frost stood just outside the locker room, surrounded by a crowd of reporters.

As they reminisced on the plays that pushed Maryland field hockey to a 3-2 shootout victory over No. 6 Virginia, Frost made special mention of DeBerdine’s chance in the first overtime period.

The junior midfielder had nestled herself between two Virginia defenders. So when defender Riley Donnelly’s pass fell into DeBerdine’s path, it left her one-on-one with Cavaliers goalkeeper Lauren Hausheer.

“When Brooke had the shot I was like, ‘I’m going to give all my energy to Brooke,’” Frost said.

DeBerdine tried to lift the ball above Hausheer and into the top corner. But the junior misjudged her power, blazing the ball over the crossbar.

DeBerdine’s quip encapsulates a team spirit that has been fostered over the course of the season — a spirit on full display during the Terrapin Invitational, as the Terps raced to victories over the Virginia and James Madison.

Heading into Friday’s matchup against the Cavaliers, Maryland sought to enact revenge on its former ACC rival, having suffering its first defeat of the season to Duke in last weekend’s Big Ten/ACC Cup.

And the Terps’ prospects looked especially bleak when Virginia midfielder Rachel Robinson scored to give the Cavaliers a 2-1 lead at the end of the third quarter.

However, Emma DeBerdine’s equalizer in the fourth quarter revitalized Meharg’s squad. And while Maryland was unable to find a go-ahead goal in two overtime periods, its invigoration carried into the shootout — a shootout that Frost dominated, making three saves to give the Terps their most important win of the season.

With the Terps getting less than two days of rest before facing off against the Dukes, Meharg had concerns about Maryland’s ability to bring a similar level of intensity to Sunday’s match. A more casual warm-up session prior to the game further compounded her concerns.

However, the Terps put those concerns to bed when defender Riley Donnelly scored from the penalty spot less than two minutes into the game to give them a 1-0 lead. Midfielder Madison Maguire added to the lead in the second quarter, deflecting Kelee Lepage’s effort beyond Dukes goalkeeper Caitlin Nelson.

“We’re pretty strong,” Meharg said, “I think [our depth] puts everybody in position to come in and take over — [even] if people aren’t having their ‘on’ game.”

Maryland kept the pressure on in the second half, extending its lead to three after defender Bodil Keus fired home from a penalty corner.

Despite a comfortable lead, the Terps stayed lively, both on the pitch and on the sideline. So, when Donnelly netted her second penalty corner late in the third quarter, her teammates mobbed her, greeting her with high-fives and encouraging smiles.

“Energy is something that’s contagious,” Donnelly said. “We’re really big on having a good team energy and working together.”

And after impressing in the Terrapin Invitational, Maryland will look to further rely upon its burgeoning team chemistry as it inches toward Big Ten play. The welcoming team environment is certain to help the Terps further develop over the course of the season.

“I feel welcomed by everyone,” midfielder Nathalie Fiechter said. “Everyone helps me out with little things, with big things. I think that’s what makes us a good team.”