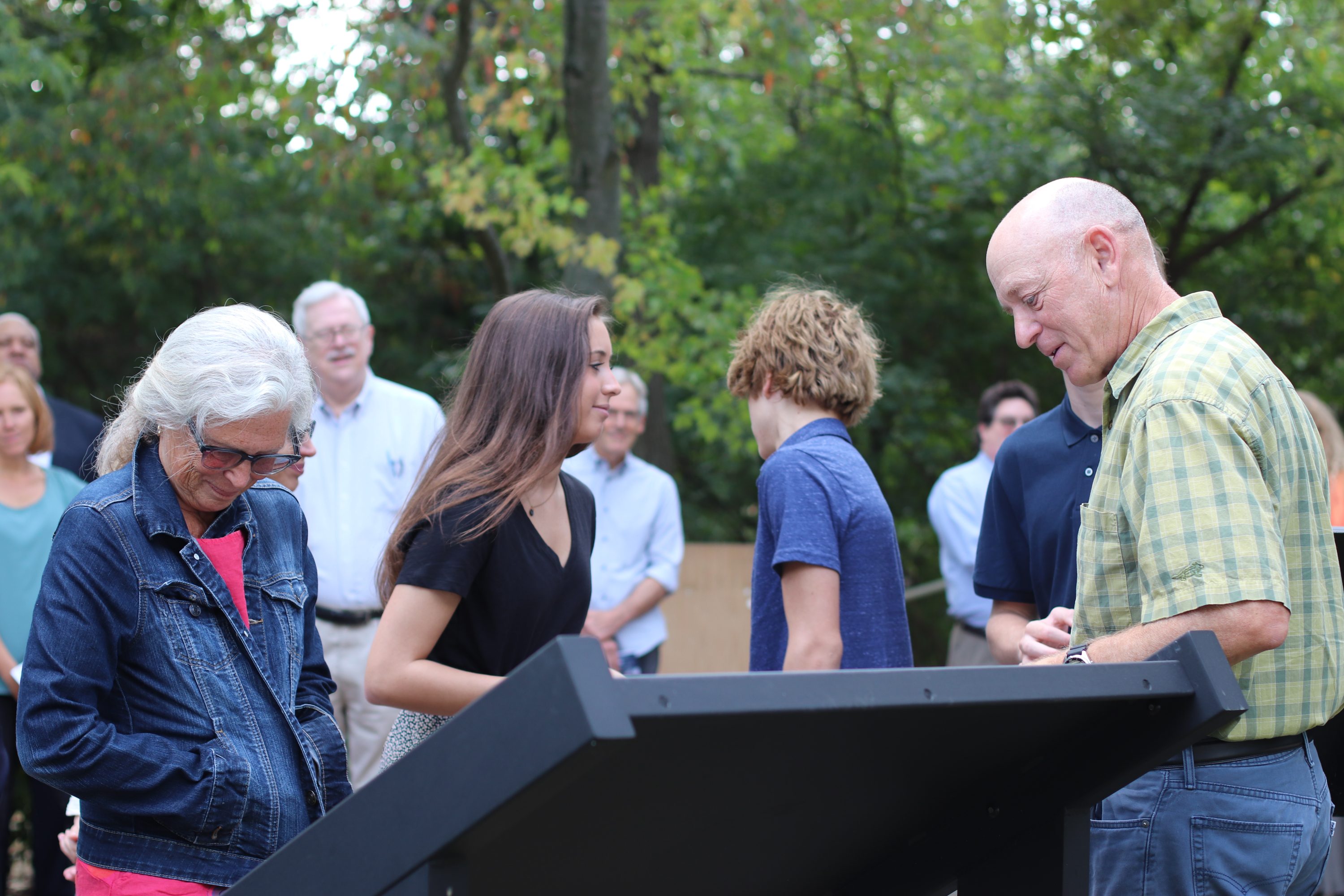 Cate Whittemore (left) and Ned Whittemore look at the Trolley Trail marker honoring their father, Reed Whittemore, during its unveiling on Sept. 11, 2019. (Joshua Martin/For The Diamondback)

By Joshua Martin
For The Diamondback

Reed Whittemore didn’t normally make much of his birthday.

“We would have had cake. We would have had a birthday party with some kind of food,” his youngest daughter, Daisy Whittemore, said. “He wouldn’t have done anything differently, because he was not a big celebrator.”

But on Wednesday, College Park made much of it, honoring the late two-time U.S. poet laureate and former University of Maryland English professor with a commemorative marker for his 100th birthday.

The marker, located at the Albion Road plaza on the Trolley Trail, is steps away from Whittemore’s home in the Calvert Hills neighborhood, where he lived for decades. About 50 people attended the ceremony, including Whittemore’s three children and five grandchildren, the current poet laureate for the state of Maryland, the poet’s former publisher and city officials.

Whittemore, who would have turned 100 this week, served as poet laureate of the U.S. from 1964 to 1965 and from 1984 to 1985, when the role was known as consultant in poetry to the Library of Congress. He also worked as an English professor at the University of Maryland from 1967 to 1984. He passed away in April 2012 at 92 after suffering from dementia in his final years, according to an obituary in the Washington Post.

One of his poems, The Party, is printed on the marker. It’s from the 1959 anthology The Self Made-Man, and was written about his children, Ned and Cate Whittemore.

“We went through a lot of dad’s poems and were trying to think of something that was approachable,” said Daisy Whittemore, 52. “[The Party] felt right for this location, and for Dad. It’s also one of our favorites.”

There’s also a brief biography, and a quote from former student Garrison Keillor, which describes Whittemore as a “movie-star handsome poet and teacher.”

The current poet laureate for the state of Maryland, Grace Cavalieri, read an excerpt from Whittemore’s poem An American Takes a Walk, written about walking along the Trolley Trail area. She said she hopes the marker triggers recognition outside the poetry world.

“I think his name is going to last longer than most poets of our century,” she said.

The trail he wrote about was the same one he’d often walk on, his son recalled.

“My dad walked in these woods probably twice a day and maybe three times some days. We moved out in 2006, so that’s 30 years here … If you do the math, that’s like 22,000 walks,” said Ned Whittemore, 63. “My vision is that in those walks he would be thinking about his work, so I think this is really a profound thing.”

Whittemore’s career also included a stint as the literary editor for The New Republic from 1969 to 1973, but it was as his role as a professor at this university that most of the people in attendance knew him best.

“To me, he was the epitome of the University of Maryland English department,” said Cavalieri, who left her graduate program for the opportunity to study under Whittemore at this university.

Daisy Whittemore said her father would have thought the celebration involved “too much fanfare.”

“My mom would have loved it,” she said. “She loved the fanfare.”