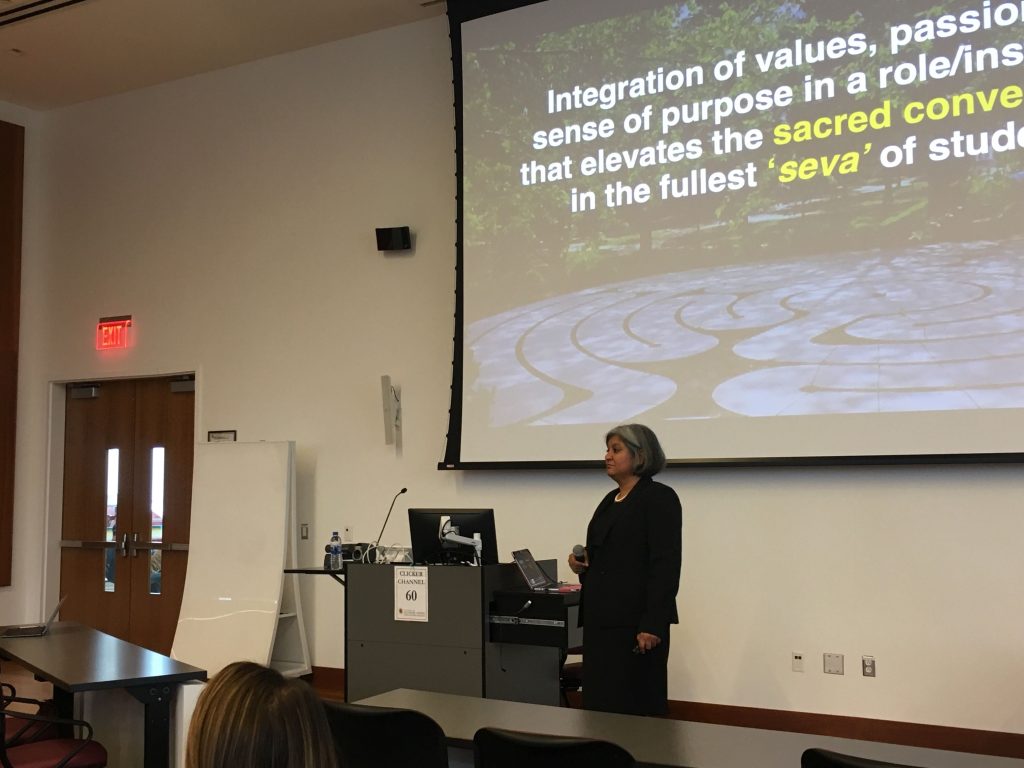 Mamta Motwani Accapadi was the first of three candidates for the university's student affairs vice president position to speak at an open forum on campus. (Angela Roberts/For The Diamondback)

By Angela Roberts and Samantha Subin

It took a while, but Mamta Motwani Accapadi finally got up the courage to approach an academic adviser the second semester of her sophomore year at the University of Texas at Austin.

She was in a bad state at the time — then a microbiology and biochemistry major, she was failing her classes and not really sure where else to turn. Her parents didn’t know how to navigate university life, and seeking therapy was discouraged in her family.

But the adviser was far from helpful.

“You’re Asian,” Accapadi remembers being told. “Your people figured it out, you’ll be fine.”

Decades later, standing in front of University of Maryland campus community members on Tuesday as the first candidate pegged to fill the school’s vacant student affairs vice president position, Accapadi said this experience still informs her perspective as an educator.

“When we talk about diversity, equity and inclusion, how do we have the interplay of those dimensions to make sure every student has the fullest opportunity to be successful and thrive here at the University of Maryland?” she asked.

In a wide-ranging conversation with the small group of students in attendance, Accapadi addressed lingering, shared trauma on campus, the importance of recognizing overlapping identities and why having hard conversations are needed sometimes.

But first, Accapadi introduced herself to the room. Though she currently serves as student affairs vice president at Rollins College in Winter Park, Florida, she has also been Oregon State University’s dean of student life and helped lead the University of Texas at Austin’s Multicultural Information Center.

During this time, she’s become experienced in bringing students together to talk things out when controversies arise. What do these conversations look like? Accapadi brought up an example that happened not very long ago.

Early on in Accapadi’s career at Rollins, a group of students set up a “border-themed” Halloween party off campus. Backlash against the gathering was quick and intense — so, Accapadi set up an open forum for the community to come together, just 24 hours after the party.

The room was packed for the forum, filled with student government representatives and leaders from Greek Life scrambling to launch initiatives. Students of color talked about their lived experiences on the campus. Then, the party’s organizer stood and apologized for the hurt she had caused.

“I’m not suggesting all moments end up that rosy. That was a freakish moment, probably, in my career,” Accapadi said. “But I have to believe in that hope. And I think that doesn’t happen with just issuing statements . . . we have to come together to try to have the tough conversations across our dominate and subordinated identities.”

Later, Accapadi opened the floor for questions — which quickly led her to address the havoc wreaked upon the campus by the killing of 2nd Lt. Richard Collins, and the deaths of Jordan McNair and Olivia Paregol. She’d like to be a part of a campus that is committed to healing, she said, and one that recognizes that the losses it has undergone may disproportionately affect certain populations of students.

“I think that trauma affects everybody, and loss is loss. I don’t want to diminish that by any means,” she said. “But are we courageous enough to have these conversations?”

Taylor Green, who launched a bid for Student Government Association president last school year on a platform centered around reaching out to marginalized students, attended Tuesday’s forum out of curiosity about who could potentially fill the vacant position.

She lauded Accapadi for being “active in her thought process” of the changes needed at the university, including improved accessibility.

SGA President Ireland Lesley, who served on the search committee for candidates for the position, also attended the forum. While she would not comment individually on any of the candidates, she said they “would all be fantastic choices for the university.”

Lesley urged students to attend the two other scheduled forums for candidates. The next one is scheduled for Wednesday, with the last set to take place on Sept. 17.

“Because there’s a way to give feedback on all these candidates, I think it’s super important for students to turn out and ask questions, and kind of give their honest opinions about these candidates going forward,” Lesley said.