Interview: Josh Peck discussed more than ‘Drake and Josh’ at SEE’s Back to School lecture 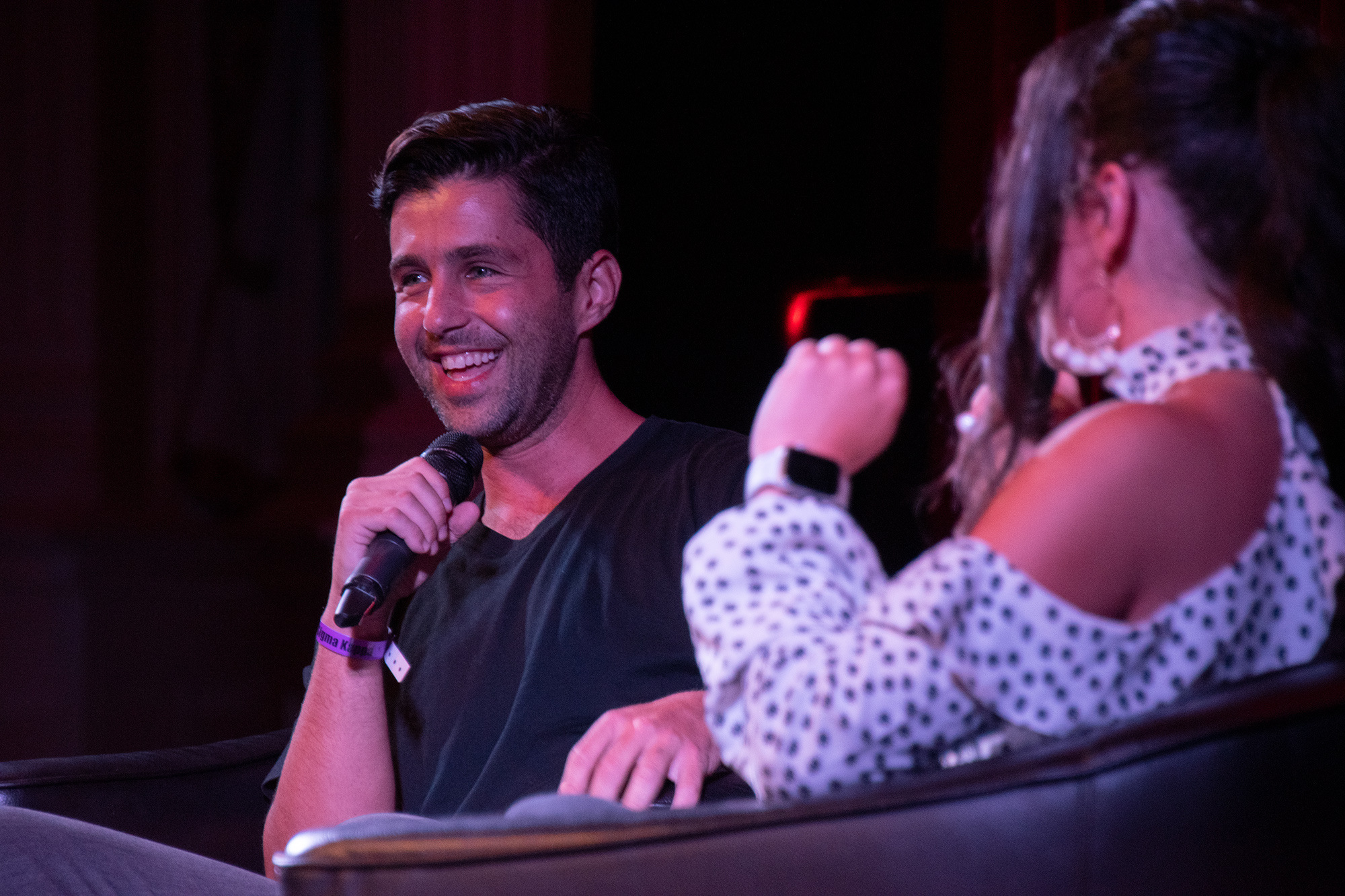 Josh Peck speaks to an eager crowd during his Q&A session at Stamp Student Union on September 6, 2019. Peck discussed many aspects of his life from his newborn son to his experiences on Nickelodeon's "Drake and Josh" to his current projects of creating podcasts and YouTube videos. (Joe Ryan/The Diamondback)

When Josh Peck steps on stage, he becomes a different man — or ten of them.

Peck is best known to many college students as Josh Nichols from the beloved 2000s Nickelodeon show Drake and Josh. But his voice transformed as he took on the personas of the people he spoke about in an on-stage interview that closely merged with a stand-up comedy act. The sold-out audience cracked up at his self-deprecating and goofy humor.

The soft-spoken 32-year-old spoke on his past and present acting gigs, podcasting and other creative ventures, as well as his experience as a new father at Student Entertainment Events’ Back to School Lecture Friday night.

SEE’s Back to School Lecture often searches for inspiring creatives to ignite excitement among returning students, but Peck’s appearance cast a unique spell of nostalgia on the crowd.

He spoke with The Diamondback before the show to shed some more light on his creative process.

This interview has been edited for grammar and clarity.

How have you adapted your comedy style after the end of Vine?

You know, Vine was this unexpected thing that I didn’t know was going to become this big thing in my life. But I was a fan of it, and I love people like Chris D’Elia who were on it, so when I just made one by chance it blew up into this thing, which was my introduction into doing more social media and internet stuff.

But the reality is that you just conform to the medium. So Vine was really great because it forced you into an economy, which is always good for comedy. Which is like, how do I say the most with the least amount of time?

And YouTube, I was lucky enough to be surrounded by people who were killing it, and I could sort of use them as my research and development team for the first eight months before I ever started posting. I would just kind of hang out, watch the way that they worked, and started adopting their style when I inevitably got on the platform.

What’s been your favorite style of comedy to perform?

I think it all depends. What’s great about social media is that it’s immediate, and you can go straight to your audience.

Something like the movie I did with Kevin Hart, The Wedding Ringer, or the show I did on Fox last year or two years ago called Grandfathered, was really fun because it was sort of single-cam, more nuanced comedy, not necessarily as big as Drake and Josh. But then something like Drake and Josh was so great because I could literally embrace the goofiest side of myself which is usually my go-to anyway.

How has interviewing celebrities on your podcast, “Curious with Josh Peck,” been different from acting alongside them?

I think it’s just, inevitably, whatever you do when it comes to entertainment, it’s about being an artist. There are so many different paths you can take and I’ve been lucky to do a lot of work in movies and television and then find success in the internet and social media and then podcasting, but they’re all complementary in that respect.

So it’s good for me to use all these different avenues to express myself in a different way.

What I love about the podcast is I’m just a fan. I listen to a lot of podcasts, the long-form aspect of it allows you to really talk in-depth about your life and feelings and opinions, as opposed to the talk show format which is very much like you got to get it out in eight minutes or however long you have, and you’re also trying to vigorously promote whatever you’re there promoting. So I find you lose a little bit of that intimacy.

I can’t believe how many people have agreed to be on my podcast thus far, I keep waiting for it to dry up and I’m going to be like, interviewing my mom. But it’s been going well, and it’s one of my favorite things that I get to do.

It’s completely self-governed. I bring my recorder to someone I’m fascinated by and we sit down for an hour. I got to interview some NASA scientists yesterday at Goddard [Space Flight Center], I got to interview a former President Obama White House staffer today, and then I’ll interview John Stamos and Jeff Ross.

[Read more: The perfect back-to-school snack for your zodiac sign]

It’s such a different mix of people that fascinate me and I hope that translates to what other people are fascinated by.

What comedians and comedies do you look to as inspiration?

Oh, man. Yeah I don’t know I mean I guess [Dave] Chappelle is the greatest alive. I’m fascinated by who he is as a person and his ability, even more than just a comedian as a performer.

I was lucky enough to interview his comedy partner Neal Brennan for my podcast and I asked him about Chappelle and he was like the one thing that people don’t know as much about Chappelle is that he’s probably read every book on acting and went to performing arts high school.

And I think when you know that, and then you watch his specials, for me what elevates it is his ability to become these characters and act out these mini, one-man scenes. He’s the shit, he’s the best.

I think it’s specific to what he does. I think you have certain people that have a really really funny, smart take on the world and maybe their delivery is a little straightforward, and vice versa, maybe someone who’s a great performer but doesn’t necessarily have the joke writing ability, and he really has both.

It’s just great to see someone performing — I mean you know it’s like watching any great perform, whether it’s like Tom Brady or whomever, it’s someone who’s literally in the pocket, and every cylinder’s firing.