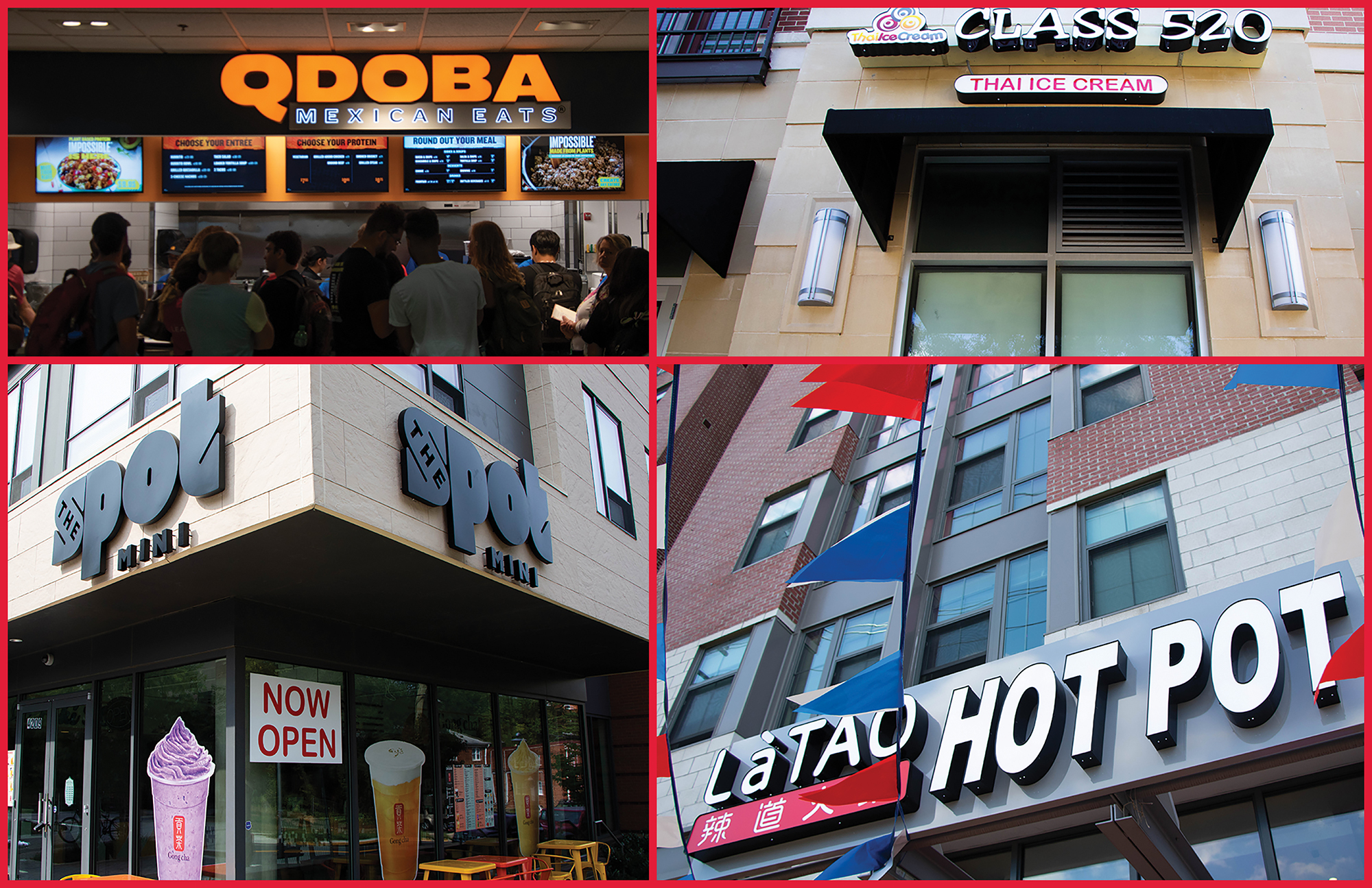 Several new restaurants opened in College Park over the summer.

Several new eateries are popping up on the University of Maryland’s campus and around College Park. Here’s what you missed during a busy summer.

After months of construction, the LaTAO Hot Pot Restaurant finally opened its doors under the Enclave on Aug. 19.

LaTAO — which serves all-you-can-eat sushi and Chinese cuisine — is the first business to fill the apartment building’s first floor leasing space. The new late-night restaurant specializes in Sichuan “hot pot,” a communal-style experience in which customers order various ingredients to cook in a large boiling pot of broth.

Options at LaTAO range from raw vegetables, such as enoki mushroom and spinach, to thinly sliced meats, such as pork belly and beef. Customers can also add an all-you-can-eat sushi deal in addition to hot pot for just $3 extra.

Emily Gee, a senior information systems and operations management and business analytics major, was excited to have the restaurant so close to campus. LaTAO is the only hot pot speciality restaurant located in College Park.

LaTAO has free parking behind the Enclave building.

More than 20 customers waited for their Mexican food fix from the new Qdoba Mexican Grill, which opened on Aug. 26, replacing Taco Bell.

“I like Qdoba better than Taco Bell, and I think it has better options,” said Ayana Akli, a freshman civil engineering major. “I like the Mexican style, and I also like that you can see the food — you can see them cooking it right there.”

The new restaurant accepts both Terrapin Express and Dining Dollars.

Omar Tarabishi, a staff member in the Arabic and Persian studies department, was “kinda bummed” at first that Taco Bell was closing.

“It’s been such a historic part of Stamp. It’s been here since my undergrad, since I started the position here. But Qdoba’s a good replacement,” he said.

“I mean, [Qdoba includes] free guac, free queso on top of your burrito bowl. It’s a little bit of a cheaper price for that, so I think it’s fantastic,” Tarabishi said.

520 Ice Cream and Teas will open its fifth location in College Park.

The new ice cream and tea store — which will offer stir-fried ice cream, also known as rolled ice cream — will be located below the Domain apartment complex, next to Jumbo Jumbo and Subway.

The store is part of the increase in Asian cuisine in the College Park area, along with The Spot Mini and Kung Fu Tea.

Although its website advertises a July 2019 opening, there have been no updates so far on the opening date.

The Spot Mini — a smaller version of Rockville-based Asian and Polynesian food hall The Spot — is open for business in College Park.

Located right across from Dunkin’ Donuts in the Terrapin Row apartment complex, The Spot Mini features three of the five food vendors housed at the original Spot: Poki DC, a poke bowl restaurant based in the District; Gong Cha, a tea vendor influenced by Chinese culture; and Akira, a ramen restaurant and informal Japanese Pub.

In one corner of the restaurant, a blank TV sits in front of some seating. Felix Lee said customers are welcome to hook their gaming consoles up to it.

Yankai Xu, a sophomore enrolled in letters and sciences, said it was his second time visiting The Spot Mini. He enjoys Gong Cha’s tea — and the “average” price point at which its offered, he said.

“There was another place in College Park that charged $15 for three sushi rolls,” Yang said. “This one charges $12, so it’s better.”

Both Emily Lee and Felix Lee hope the variety of food and drinks The Spot Mini offers will attract a large student following.