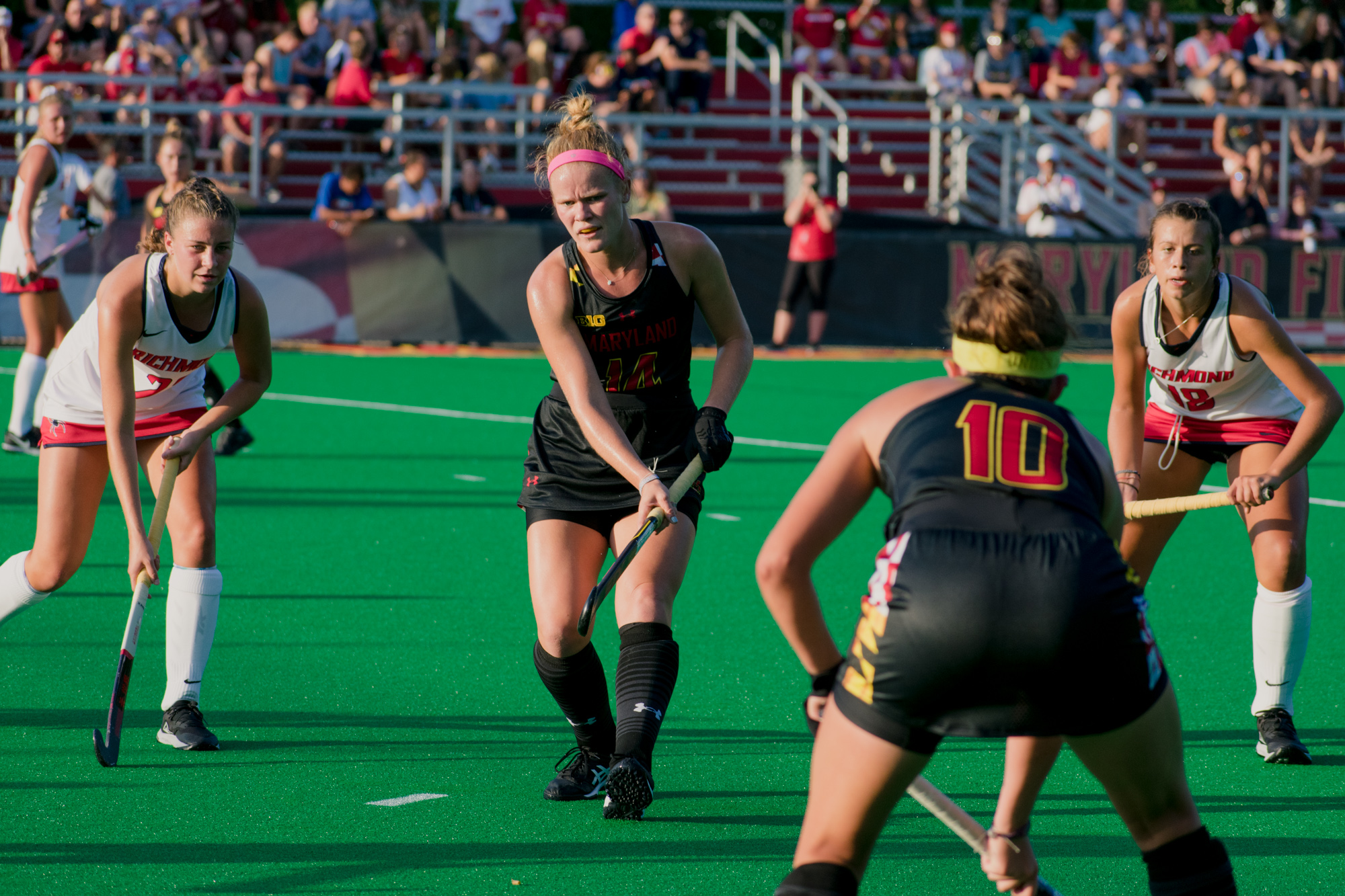 When Bodil Keus left with an injury during No. 2 Maryland field hockey’s matchup against New Hampshire on Sunday, the stakes were low. The Terps held a commanding 5-0 lead with about five minutes left, and the Wildcats, despite upping their intensity in the second half, had recorded only four shots to that point.

However, with Keus out of the equation, New Hampshire pushed to finally break through. With less than a minute left in the game, Wildcats forward Bloem van den Brekel fired a shot toward the Maryland cage. With goalkeeper Skye Joegriner out of position, the ball looked destined to score and dash Maryland’s hopes for its first clean sheet of the season.

But freshman midfielder Belle Bressler rushed toward the goal line before deflecting the ball over the bar to confirm Maryland’s first shutout of the season.

In a game where Maryland’s attacking output raised eyebrows, it was the Terps’ defensive performance that fills them with the most confidence as they prepare for difficult games against No. 3 Duke and No. 13 Boston College next weekend.

“What I’m really psyched about is [that] we had two defensive saves,” coach Missy Meharg said.

After conceding a goal within the first six minutes of Friday’s game against Richmond, the Terps aimed to limit goal-scoring opportunities by denying attackers the ability to cut inside the shooting circle in their second game.

That plan was especially successful in the first half, with the Wildcats failing to record a shot until the third quarter.

The Terps were led by Keus, who withdrew after she was hit in the knee late in Sunday’s contest. She’s expected to be available for this weekend’s top-15 matchups. The junior prides herself on her composure and ability to read attackers’ movement in the final third of the pitch.

“My main goal is not to step in and wait for the attacker to make a decision on what they’re going to do,” Keus said. “So I’m just keeping calm and as soon as I get the ball, I’m just trying to find the outside and get it out of the way.”

However, defensive responsibility is not solely left to the back four, as the coaching staff expects all 10 outfield players to contribute defensively.

“It’s important that your forwards are your first line of your defense and they’re able to do it really well,” assistant coach Katie Bam said earlier in the season.

Midfielder Madison Maguire exemplified that commitment to defense. In addition to scoring a goal and assisting two, Maguire made a number of defensive contributions, none more important than a defensive save she made in the third quarter.

“Madison Maguire as a post player is just phenomenal,” Meharg said. “That’s a big time save.”

Meharg’s squad will be tested defensively by Boston College and Duke this weekend, which have combined for 12 goals through four games this season.

And while the Terps showed improvement in terms of denying opponents’ opportunities to shoot the ball in their second contest, they will be aiming to take their defensive training up another level to ensure the pair of former ACC foes don’t have their way in the shooting arc.

“We’re going to face some shots,” Meharg said. “We definitely gained ground from Friday in terms of letting the ball into the circle. In that regard, we’ll continue working on that because I’m confident that Boston College and Duke will get into our circle.”