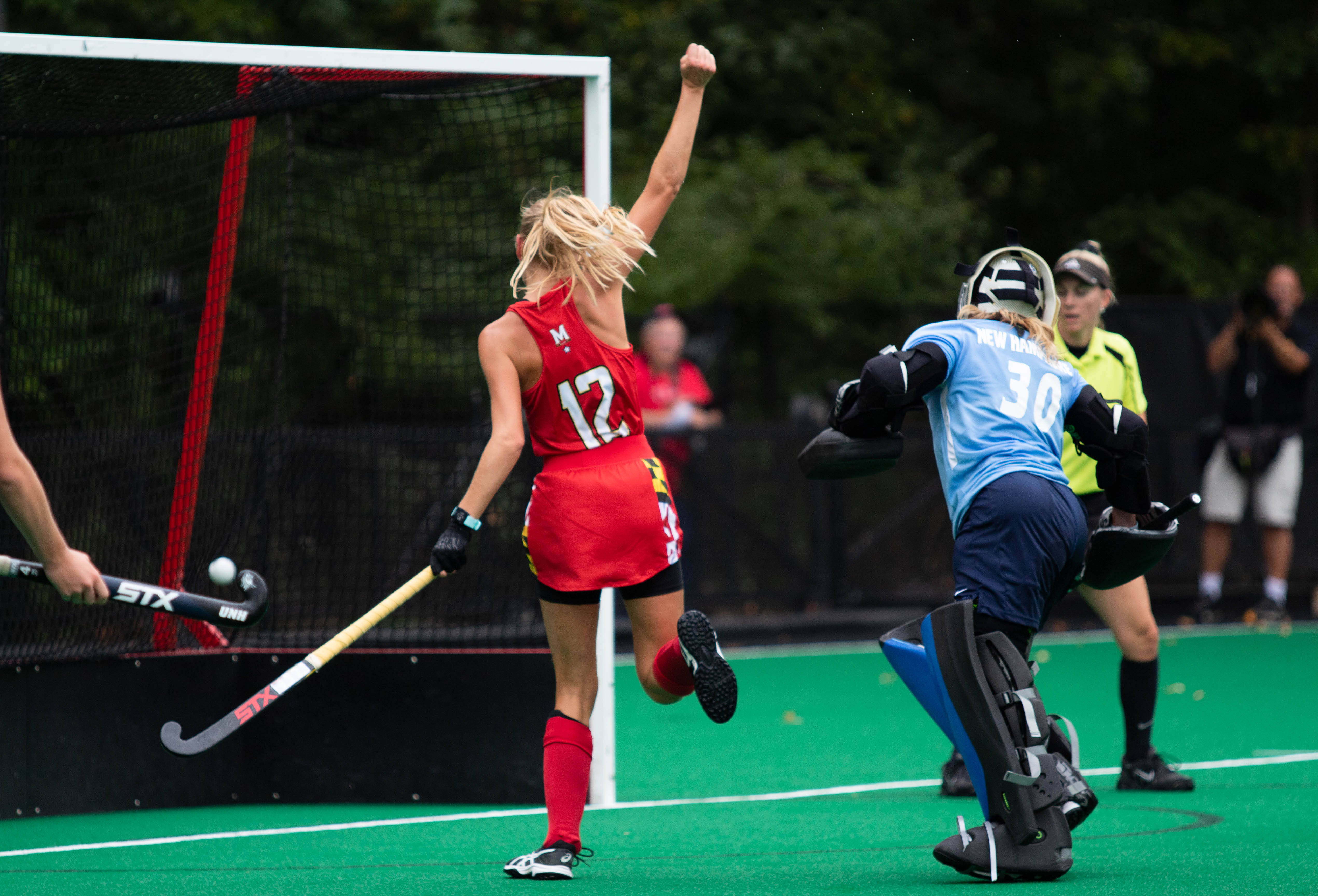 With eight minutes left on the clock in the second quarter and Maryland field hockey leading 1-0 in its clash with New Hampshire, sophomore Bibi Donraadt picked up the ball just outside the shooting circle and charged toward the Wildcats’ net.

The reigning Big Ten Freshman of the Year feinted her way around two New Hampshire defenders before deftly chipping the ball over goalkeeper Rachel Simkevich.

Donraadt’s impressive run and finish was the highlight of a dominant team display in which the No. 2 Terps looked confident and dangerous from start to finish, outshooting New Hampshire 25-to-6 en route to a 5-0 victory.

The Terps’ attack continued to probe throughout the first period, forcing three saves from Simkevich. Meanwhile, the defense was tight and composed, not surrendering a shot in the first quarter.

Coach Missy Meharg’s squad continued to apply pressure in the second period, with Donraadt’s chipped finish extending Maryland’s lead to 2-0. Donraadt added her second goal of the game shortly after, rebounding a Keus effort after yet another penalty corner.

“Bibi’s [a] natural,” Meharg said. “She can run up and down those side midfields and really create a problem for defenses.”

The Terps (2-0) continued to control the tempo of the game, with midfielders — and sisters — Brooke DeBerdine and Emma DeBerdine consistently driving at Wildcats defenders. Their midfield runs helped keep the game played within Maryland’s half. Consequently, New Hampshire’s attack was held impotent, failing to record a shot in the second quarter, too.

“When you’re brought up with a sister like that, you know what the cadence and the footwork is,” Meharg said. “We’re very fortunate [that] they’re both on this team.”

The Wildcats (0-2) upped their intensity in the third quarter, though, recording three shots in the frame. Maryland’s command wasn’t as tight, either, with midfielder Madison Maguire forced to make a crucial goal-line clearance off a New Hampshire penalty corner to keep Maryland’s clean sheet intact.

Still, the Terps’ attack continued to test New Hampshire’s defense. Maguire fired a shot from close range at New Hampshire goalkeeper Jemma Woods — one of four saves she made after replacing Simkevich at halftime. However, Meharg’s squad was held scoreless in the third period.

The only disappointment Maryland could have after three quarters is that it didn’t score more. However, the Terps showed off again in the fourth, with Maguire rifling a shot into the bottom corner of the cage five minutes into the period. Graduate transfer Jen Bleakney added her second of the season 30 seconds later, pushing Maryland’s lead to 5-0.

“All of us can score,” Maguire said. “The variety of everyone scoring brings so much energy to the team.”

Despite some increased pressure from New Hampshire, the defense held onto its clean sheet, with freshman Belle Bressler deflecting a shot over the bar with less than a minute left to seal Maryland’s first shutout of the season.

“Last year, going off of Hannah Bond’s save at UConn,” Maguire said. “It just created this culture that we’re going to save the ball no matter what.”

Keus exited the game with about five minutes left after getting hit on the knee with a stick. However, the defending Big Ten Defensive Player of the Year expects to be ready for Maryland’s weekend matchups against No. 3 Duke and No. 13 Boston College.

Keus’ return, coupled with heightened confidence after a convincing performance on Sunday, has Maryland riding high two games into its slate.

“We have a lot of brand new players … we’re getting a lot of people in the games,” Maguire said. “Having this 2-0 start is beneficial to us.”