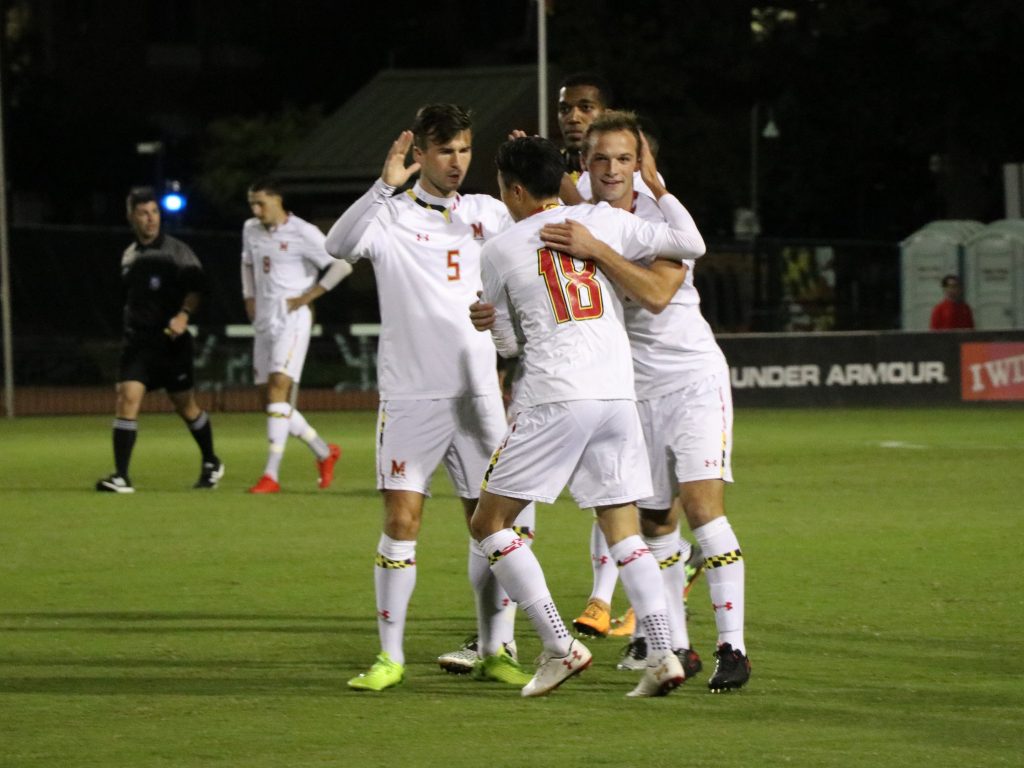 Forward Paul Bin is congratulated by his teammates after scoring a goal in Maryland men’s soccer’s 1-0 win over Denver at Ludwig Field on Oct. 16, 2018. (Andi Wenck/The Diamondback)

Ludwig Field, the home of Maryland men’s soccer, will be the site of the Big Ten tournament’s semifinal and championship matches in November, the conference announced Monday.

“The Big Ten is excited to head to Ludwig Field for the 2019 Big Ten men’s soccer tournament. Maryland’s soccer program has years of tradition and pride that exemplifies the Big Ten,” said Wendy Fallen, Big Ten associate commissioner for sports administration, in a release.

Before the last four teams remaining come to College Park, the tournament begins with the eighth seed playing at home against the ninth seed. In the quarterfinal round, the top four seeds host matches to decide who will advance to the semifinal games at Ludwig Field.

This will be the second time that Ludwig Field will host the Big Ten tournament since the Terps joined the conference. In 2014, Maryland’s first year in the Big Ten, the Terps claimed the title on their home turf with a 2-1 win over Indiana.

In 2015, coach Sasho Cirovski led his team to a 2-0 win over Ohio State in Columbus to spoil the Buckeyes’ hopes of winning in front of their home crowd in the championship match. A year later, Maryland capped off a run of three conference titles in their first three years in the Big Ten with a 2-1 win over Wisconsin at Grand Park in Indiana.

The tournament returned to Grand Park in 2017, but the Terps didn’t. Wisconsin, the eventual champions, avenged its 2016 loss with a 2-1 win at Ludwig Field in the quarterfinals. Last season, before winning the national championship, Maryland fell to Indiana in a penalty shootout in the Big Ten semifinal match.

Cirovski and Co. will look to use Ludwig Field to their advantage as the Terps search for their first Big Ten tournament title since 2016.