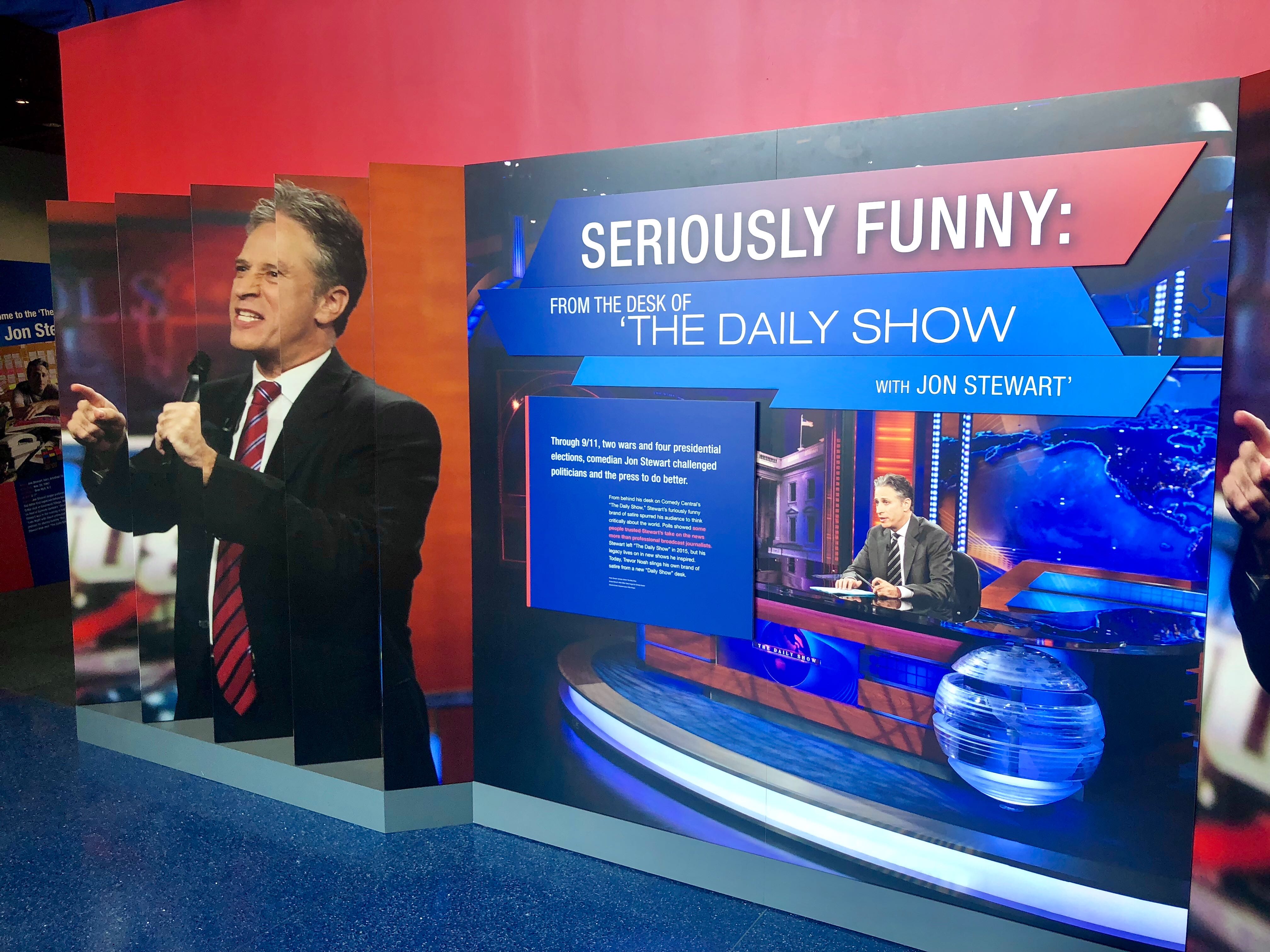 The "Seriously Funny" exhibit will be on display at the Newseum for the remainder of 2019 (Evan Haynos/For The Diamondback).

In the age of Trump, everyone thinks they’re a political satirist, from talk show hosts to comedians to podcasters. But most people aren’t that good at it.

Among the crowd of voices in the world of political commentary and humor, there is one important voice we don’t hear from anymore: Jon Stewart. The comedian left his position as host of The Daily Show on Comedy Central in 2015, but the Newseum opened an exhibit in June called “Seriously Funny,” displaying his legacy as a comedian and change-maker.

Walking in, the first thing you notice is the desk where Stewart sat and addressed his audience — with both jokes and serious points — from 1999 to 2015. More than 50 artifacts were acquired by or donated to the museum for the exhibit, such as costumes and props from field pieces, the suit Trevor Noah wore on his first show, or the combination of hand sanitizer, toothpicks and pens that Stewart kept under his desk.

While most of the artifacts make you chuckle, some make you realize the nature of ongoing problems. The show’s senior imprisoned correspondent, a bearded Elmo puppet affectionately referred to as “Gitmo” due to his reporting on Guantanamo Bay, is featured in a glass case. Gitmo was introduced in 2008, shortly before former President Barack Obama, who promised to close the controversial detention camp, was elected. Eleven years later, the Gitmo puppet serves as a reminder that people are still imprisoned there.

President Trump is, of course, featured often throughout the exhibit, his infamous “covfefe” tweet displayed proudly in a frame. While Trevor Noah, who took over The Daily Show after Stewart’s departure, has been doing a good job covering everything connected to the Trump administration, you can’t help but wonder, “What would Jon say about what’s going on this time?”

Watching old clips, people are reminded of how many careers The Daily Show started. The rotating group of correspondents, nicknamed “The Best F#@ing News Team,” often went on to have successful careers in comedy. Steve Carrell, Ed Helms, Samantha Bee, John Oliver, Hasan Minhaj and many others used The Daily Show as a jumping off point for their careers.

Many of the Newseum’s exhibits are serious and intense, but “Seriously Funny” is refreshingly entertaining. The space is filled with screens, some of which show organized clips of The Daily Show, and the largest shows a short Newseum-produced documentary on the intricate details of producing and writing a comedy show from start to finish.

The humor that the exhibit brings is not without a message, however, the same way Stewart’s opening segments usually left you with a sense of clarity in addition to laughs. Christy Wallover, the Newseum’s exhibit writer, emphasized the societal importance of the work from Stewart and his team in an interview with The Diamondback.

“Jon Stewart pushed people to think critically about the news and information they absorbed,” Wallover said. “He did it in a funny way. He put news and politics and cultural significance in a way that was approachable.”

For many college students, Stewart’s show may have been their first introduction to politics or the first time they actually found themselves engaged in political dialogue. The “Seriously Funny” exhibit on The Daily Show is open for the remainder of 2019 at the Newseum. Buy tickets online or at the door.