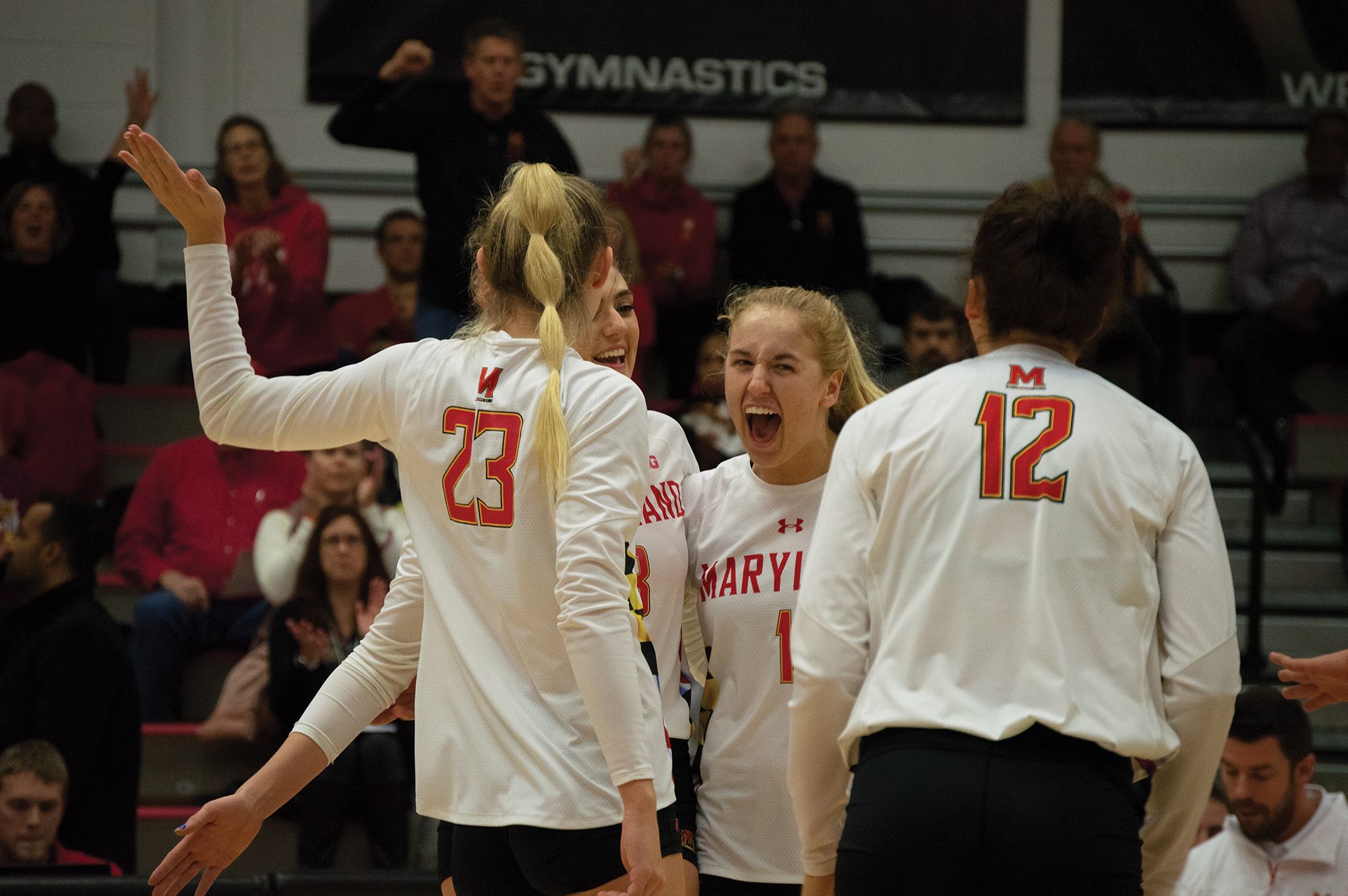 Setter Nicole Alford gets the Terps fired up after scoring a point during their 3-1 loss to No. 3 Minnesota at Xfinity Center Pavilion on Nov. 16, 2018. (Joe Ryan/The Diamondback)

The Maryland volleyball team announced its 2019 schedule Tuesday, looking to keep its momentum in the Big Ten with head coach Adam Hughes entering his sophomore season.

After finishing with a program-high nine Big Ten wins last season, the Terps have put together a schedule featuring 12 matches against teams selected for the 2018 NCAA tournament, including 10 foes who finished the campaign in the top 25 of the AVCA poll.

“As a group, we are hungry to achieve new heights this year and continue the growth of our program,” Hughes said in a release. “It’s by far the toughest all around schedule we’ve put together since the start of my time here at Maryland.”

[Read more: After losing its coach and top hitter, Maryland volleyball surprised everyone in 2018]

The Terps will open their season taking on Austin Peay and Kansas State at the Wolfpack Invitational in Raleigh, North Carolina, before opening their home slate against Howard, a squad that made the NCAA tournament last year, on Sept. 2.

The next week, Maryland will travel to San Antonio for the UTSA Classic and face off against Texas-Rio Grande Valley, Houston and UTSA.

The Terps will then host Arkansas, George Mason and Princeton for the annual Maryland Invite tournament Sept. 13 and 14. Last year, Maryland faced Princeton during the Temple Invite and lost, 3-2, one of its three nonconference defeats.

The Gamecock Invitational, the final nonconference tournament for the Terps, will feature a rematch against South Carolina — who beat the Terps in College Park last year — along with matches against Appalachian State and Kennesaw State on Sept. 20 and 21.

And the Terps will have to navigate a tough conference schedule, with 10 matches against NCAA tournament selections out of the Big Ten. Maryland will face off against Penn State, Michigan, Wisconsin, Minnesota and Purdue, in addition to Final Four teams Nebraska and Illinois.

After sweeping Ohio State last season, Maryland will open its conference slate at home against the Buckeyes on Sept. 25, before taking on Michigan State in its first of two matchups with the Spartans.

Maryland will then return home to play Michigan and Michigan State. The Terps earned their first ranked win on the road in program history against the Wolverines last year in a 3-0 sweep of then-No. 15 Michigan.

Key matches include home and away bouts with Penn State, Nebraska and Wisconsin, and home duels against Minnesota and Illinois.

The Terps will finish the regular season away from College Park against the Cornhuskers and Iowa — who finished third and 10th in the Big Ten in 2018, respectively.

“There is a growing excitement around the program,” Hughes said in a release. “I feel like my staff and I put together the best possible schedule that prepares our team for Big Ten play as well as a postseason opportunity.”