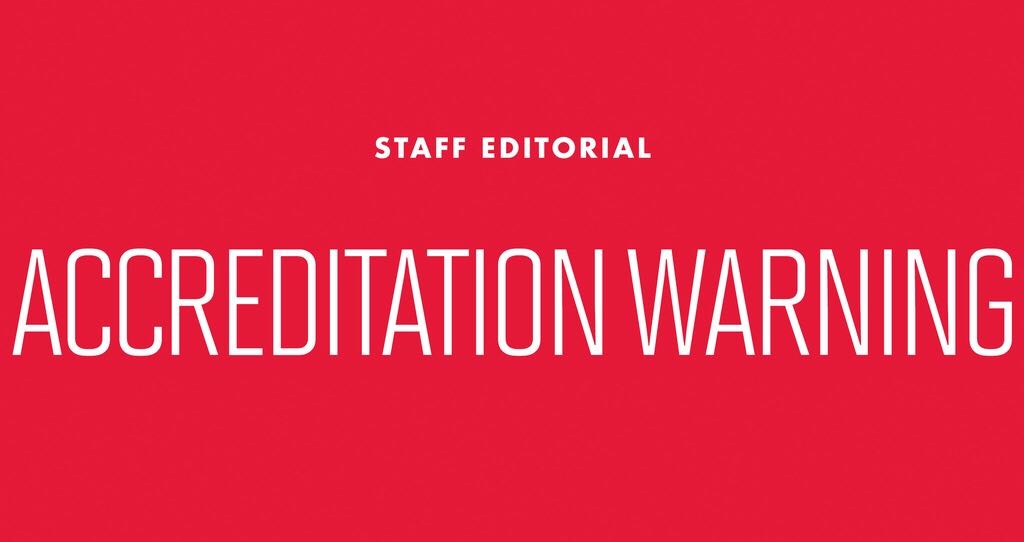 After the chaos that ensued in the fallout from Jordan McNair’s death, the Middle States Commission on Higher Education officially placed the University of Maryland’s accreditation on “warning” status.

This is a major embarrassment for the university and one that delivered a scare to many of its students. In the extremely unlikely scenario that the university loses its accreditation, students would lose their federal financial aid.

In issuing its warning, the commission cited concerns about a lack of transparency and the potential interference of the Board of Regents in this university’s affairs. Although it’s absurd that the situation has come to this point, this editorial board is troubled by university President Wallace Loh’s attempts to distance the university from this issue.

In interviews with The Diamondback and at public meetings, Loh has made his perspective clear. In his words, “If we don’t have appropriate autonomy, it’s not because of anything we have done, it’s what other people have done to us.”

Comments like these distract from how the university helped get us where we are today, and frame the school as a passive victim of the board’s incompetence. The regents’ actions raised serious concerns for the commission, which examined this university’s system of governance.

Among other problems, the Middle States visiting team took issue with the board foisting control of two separate investigations into this school’s football program. It also criticized the regents’ public recommendation — which, in effect, functioned more as a directive — to retain the school’s athletic director and then-football coach DJ Durkin.

The regents bear most of the blame for the ongoing review of the university’s accreditation. But university administrators cannot entirely absolve themselves; their missteps were instrumental in setting up the board’s decisions that led to concerns about the school’s autonomy.

On June 13, 2018, 19-year-old offensive lineman Jordan McNair died after suffering heatstroke — a condition with a 100 percent survival rate when treated immediately with cold water immersion — at a team workout.

The university said it accepted “legal and moral responsibility” for his death that August. And by the university’s own admission, its failings led to McNair’s death and the aforementioned investigations. The Middle States determined that the decision to take over those investigations “inappropriately removed authority” from Loh.

Despite his statements about taking responsibility for McNair’s death, Loh has been eager to point out the regents’ shortfalls, drawing attention away from the administration’s failings.

And the campus community’s response has reflected that. When Loh first announced his retirement, the university’s provost and the deans of every college were quick to wipe clean the university administration’s slate. They released a letter calling on Loh to stay, faulting the regents for violating the university’s autonomy. But Loh bore responsibility for the mismanagement of the athletics department, and he didn’t act on an anonymous tip informing him of abuse in the football program beyond sending an email.

The Middle States Commission is correct. It is inappropriate to usurp control of an investigation from the university’s president — control then given to prominent university alumni and somehow intended to provide an independent perspective. But what’s also inappropriate are attempts to distract from the university’s role in the horrific chain of events that resulted in a student’s death.

Those outside investigations found the university partially responsible for the problems with the athletics department, and the football program in particular. One investigation found that athletic trainers hadn’t properly diagnosed or treated McNair, while the other found a culture of abuse in the football program — one that had a strength and conditioning coach verbally degrading athletes and throwing food, weights and a trash can of vomit at them — that was enabled by a lack of administrative oversight.

The school has made strides in its progress toward making sure what happened to McNair doesn’t happen to another student-athlete, such as completing the 20 recommendations that came from the investigation into his death. And the recommendations resulting from the investigation into the program’s culture have similarly resulted in some positive changes.

But we shouldn’t be too quick to forget the role the university played. Yes, this university’s accreditation is under review largely because the regents greatly overstepped. Yet this university set the ball in motion with Jordan McNair’s avoidable death and its mishandling of the aftermath. Even though the Board of Regents is also in the wrong, that’s a reality the university can’t seem to come to terms with.