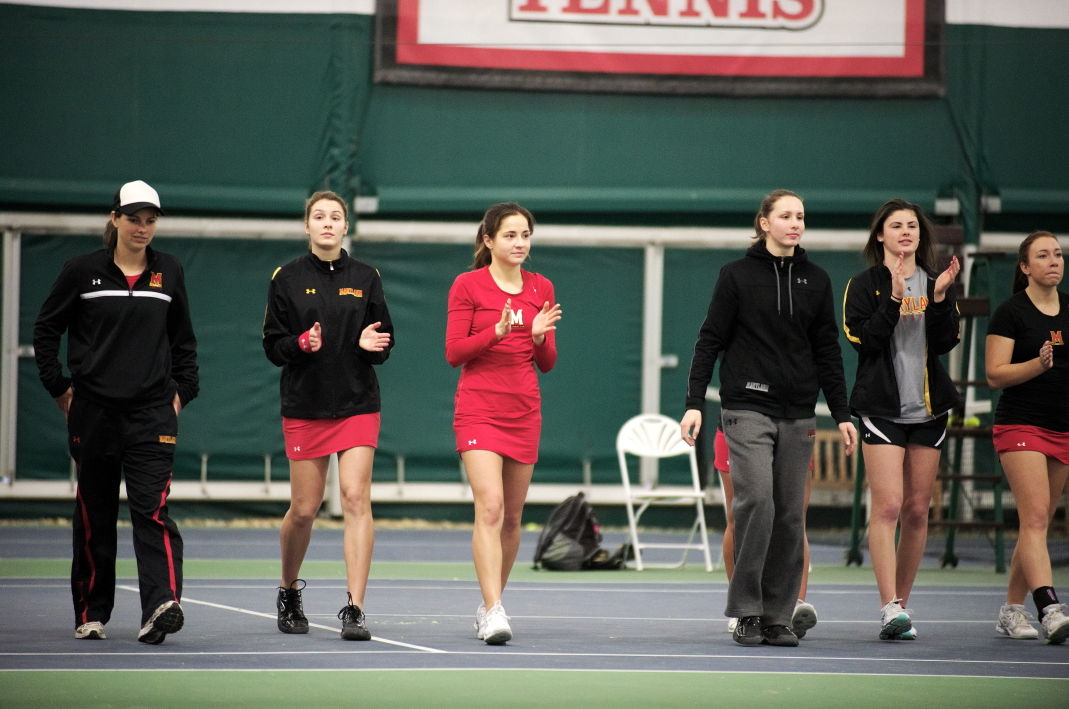 Members of the Terps' tennis team clap in 2015. (File photo)

The announcement comes just over a month after Evans announced that seven-year coach Daria Panova’s contract would not be renewed following a 3-18 record in 2019, including just one win in conference play.

Dougherty, a member of Panova’s staff since 2016, had been serving as the interim head coach while the department conducted a national search. Ultimately, the search ended Tuesday with a promotion rather than an outside hire.

“I am grateful to [Panova] for giving me the opportunity to bring my family back home to Maryland,” Dougherty said in a release. “Maryland is a very special place and I cannot wait to get to work leading our program to new levels of success.”

Since coming to College Park under Panova, Dougherty has helped develop two All-Big Ten players and she played a part in bringing in a top-25 recruiting class in 2017.

A native of Ellicott City, Dougherty played tennis in the Big Ten at Wisconsin before graduating in 2002. She broke into coaching at American in 2003 before receiving assistant coaching opportunities at Penn State from 2004 to 2007 and Wisconsin between 2007 and 2009.

From 2010 to 2016, Dougherty served as the head coach at Iowa, and led the program to the national championships and the program’s highest ranking (No. 18) in her first season at the helm.

“We have been impressed Katie’s great player development skills and recruiting acumen over the past few seasons,” Evans said in a release. “That, combined with her past success as a head coach in the Big Ten, makes her a tremendous fit as the next leader of Maryland women’s tennis.”

With Dougherty’s hiring, three of the last four non-revenue sport coaching hires have included a national search before deciding on a member of the previous coaching regime. Baseball promoted Rob Vaughn in 2017 and Adam Hughes took over the volleyball program in 2018 after Steve Aird resigned.

The wrestling program opted for an outside hire in Alex Clemsen, who joined the Terps in April.

“I would like to thank Damon Evans, [Associate Athletic Director] Kristi Giddings and the rest of the search committee for this opportunity,” Dougherty said in a release. “I feel so fortunate to join such an outstanding group of coaches, and a University and athletic department with a long-standing tradition of excellence. I am looking forward to working with this great group of student-athletes and building the program.”