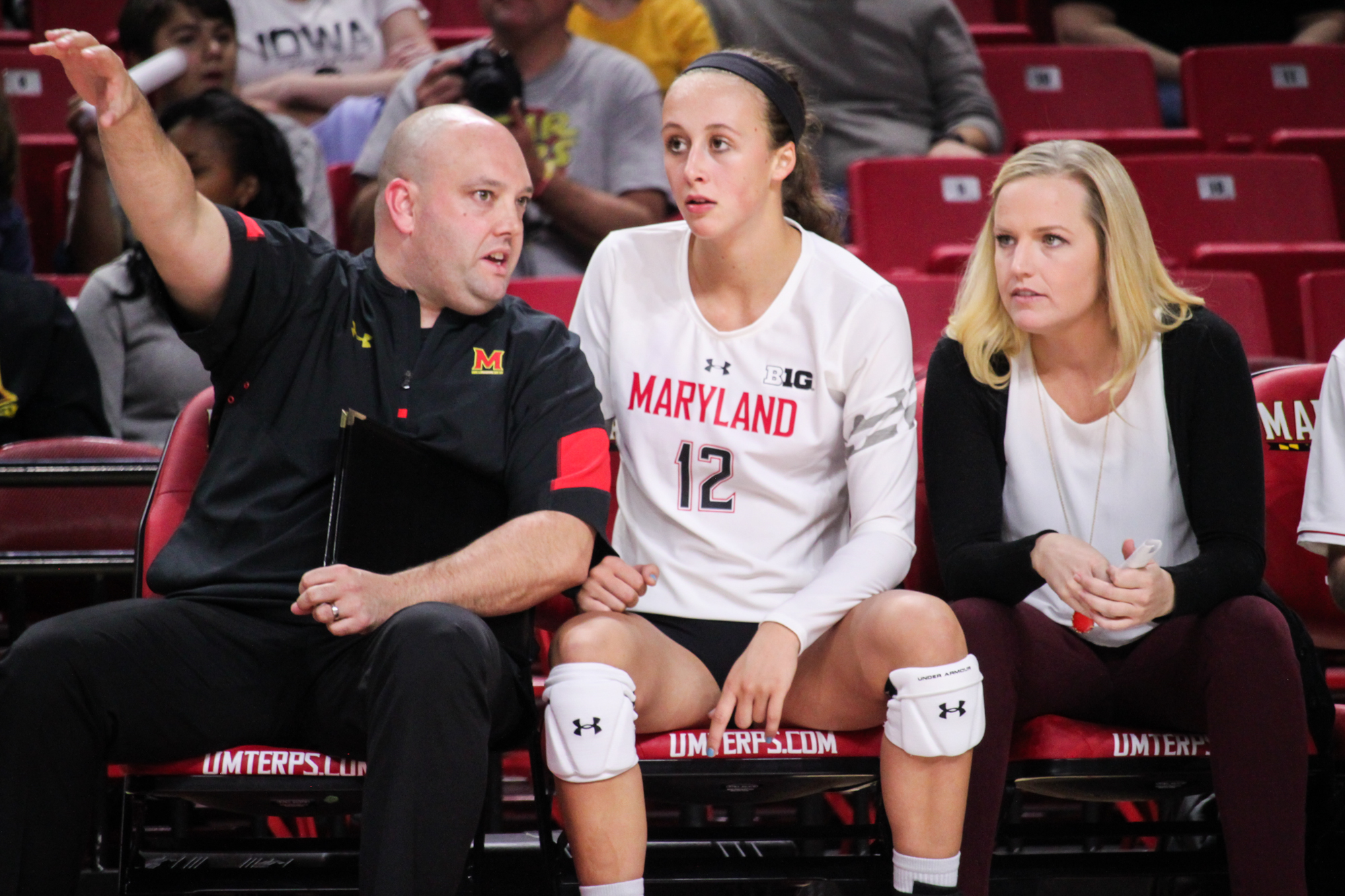 When Maryland volleyball discovered in late November it was the first program left out of the NCAA tournament, thoughts quickly shifted to next season and the potential for redemption after the Terps recorded their best record since 2010.

No one who attended Maryland’s selection show watch party at the Old Maryland Grill restaurant on Nov. 26 thought the disappointing finish to the campaign would mark the end of an era.

Steve Aird planned to usher the Terps into a promising 2018 season until a “unique” offer from Indiana pried the fourth-year coach from College Park. His decision has left players, recruits and parents in a state of disbelief after he’d led the Terps’ rise to prominence in the highly regarded Big Ten through his recruiting ability and management skills.

Class of 2018 recruit Rainelle Jones said that she was hurt by the news and needed time to process it. 2019 recruit Cara Lewis said she bought into Maryland, not just Aird, but feared the next head coach might not honor her scholarship.

Stephanie Gardner, the mother of rising sophomore Jada Gardner, declined to comment because “most parents and kids are still trying to wrap their minds around it and figure out what it means now and in the future.”

Aird appreciates what he built inside Xfinity Center Pavilion, where he helped increase average attendance from 837 fans per match in 2014 to 996 in 2017. He nabbed consecutive ranked recruiting classes while improving the team’s RPI from No. 150 to No. 52 in his four years in charge.

But the opportunity Indiana offered Aird captured his entrepreneurial spirit, and he jumped at the chance to relocate his family to the college town of Bloomington.

“It would have taken an incredibly unique situation for me to look at it, and that’s what this kind of was,” Aird said.

Indiana’s impending completion of a $17 million volleyball and wrestling arena in September and its location in the Midwest, arguably the most talent-rich region for volleyball recruiting, made it an attractive rebuilding spot for Aird despite the Hoosiers’ 12-20 record last season.

Aird outgrew Xfinity Center Pavilion before the Terps had the chance to.

“I want to be in a place where the sport is, you know, really, really important and valued,” Aird said. “As much as I think Maryland certainly offers that, I think Indiana’s level of commitment is pretty impressive.”

In August, Maryland unveiled plans for an $800,000 facility upgrade, including new locker rooms and a team lounge, adjacent to Xfinity Center Pavilion. It was a step in the right direction for a Terps program that gained national attention during Aird’s time at the helm.

But the locker rooms didn’t address the pavilion itself, an arena Aird tolerated but never regarded as his ideal home floor. It holds about 1,500 people, so Aird pushed for the team to vacate the gymnasium for the Xfinity Center main floor ahead of marquee matchups. The Terps played five matches on the main floor in 2017, more than in the previous three years combined.

In 2016, 3,672 fans attended a match on the main floor against Iowa, filling a large part of the lower bowl of the arena, although the upper sections were left empty. The pavilion was too small to house contests against top teams with large traveling support, but the main floor’s turnout — even the program-record 4,522 against Penn State in 2014 — made it seem cavernous.

At Indiana, the Hoosiers are committing $17 million for a 3,000-seat arena. Aird envisions the stadium could bring Indiana to the upper reaches of the Big Ten, both in attendance figures and performance.

“Being able to coach in the Big Ten is something that I value,” Aird said. “There’s very, very few opportunities like that, that come up, and … you couple it with the new arena [and] the fact that they needed someone that can rebuild. A lot of the things that I enjoy about building companies and building programs, they were going to allow me to do.”

Aird had free rein at Maryland. He said he knew he was valued and that people cared for his team, especially after his strategy of gradual development through recruiting showed its first signs of success in 2017, when the Terps went 18-14. Aird hopes Maryland’s progress won’t be sidetracked by his departure.

The Terps featured three PrepVolleyball top-30 ranked recruits at outside and opposite hitter last campaign, with Gia Milana, Erika Pritchard and Samantha Drechsel notching the top three kill totals on the team. Those players, whom Aird influenced to come to Maryland, offer a good attacking base to build on.

“[Aird] was just so cool and goofy and real,” Milana said in 2016 of her first impression of the coach when she was a recruit out of Romeo, Michigan.

But it remains to be seen whether Maryland’s next coach can gain the attention of top recruits in the same manner.

With libero Kelsey Wicinski transferring to Florida State, and defensive specialist Samantha Higginbothem and middle blocker Hailey Murray graduating, Maryland will be bolstered by the addition of Jones, a middle blocker and PrepVolleyball’s No. 32-ranked recruit in the country.

Like Milana, Jones formed an immediate connection with Aird. He told her finishing the team’s rebuild would be difficult, but that they’d get through it together, which encouraged her to commit.

“He brightened up the path,” Jones said in November. “He made the path seem like it was so much easier than it actually was.”

As of Dec. 28 — the day after Maryland announced Aird would be leaving — he hadn’t had the chance to speak with all of his players regarding his move. Lewis, a middle blocker from Bowie, said the same day she had spoken with players but not coaches about the change.

“Until things got really close to happening, there was no need to have conversations,” Aird said. “And then it snowballed and happened very, very quickly. I’d love to reach out to all the players and have long phone calls with each one of them, but when I had informed Maryland I was moving on, they wanted to announce it very quickly, and I didn’t have the opportunity to get on the phone with everyone.”

Because the Terps are thin in the backcourt, with Sam Burgio and Nell Drummey the only returning defensive specialists, a new head coach could rely on a transfer for a quick fix — something Aird rarely opted for in his time in College Park, although he did enlist the aid of setter Samantha Snyder last season.

Associate head coach Adam Hughes, who was named an AVCA top-30 up-and-coming coach in 2015, is an option to replace Aird, and numerous Maryland players and parents have interacted with tweets supporting him this past month. But Aird said his “home run” would be bringing his staff with him to Indiana, though he acknowledged they have to do what’s best for themselves, just as he did.

When Aird joined Maryland, he faced a similar challenge, causing observers to doubt his ability to lead a turnaround. But he resurrected the Terps and brought them to the verge of an NCAA tournament appearance, before leaving without guiding the team to the kind of deep postseason run he’d spoken about.

“I don’t think it was ideal [to leave Maryland so abruptly], but I think the players and the families know how much I care about them and obviously understand that I have a family to take care of,” Aird said. “I was presented with an opportunity at a place where I think is going to be great for my family, and in college athletics, in this day and age, I think it’s important to find the right fit in a place that truly values you.”