UMD officials want to be ready for a campus shooting. Here’s what they’re doing. 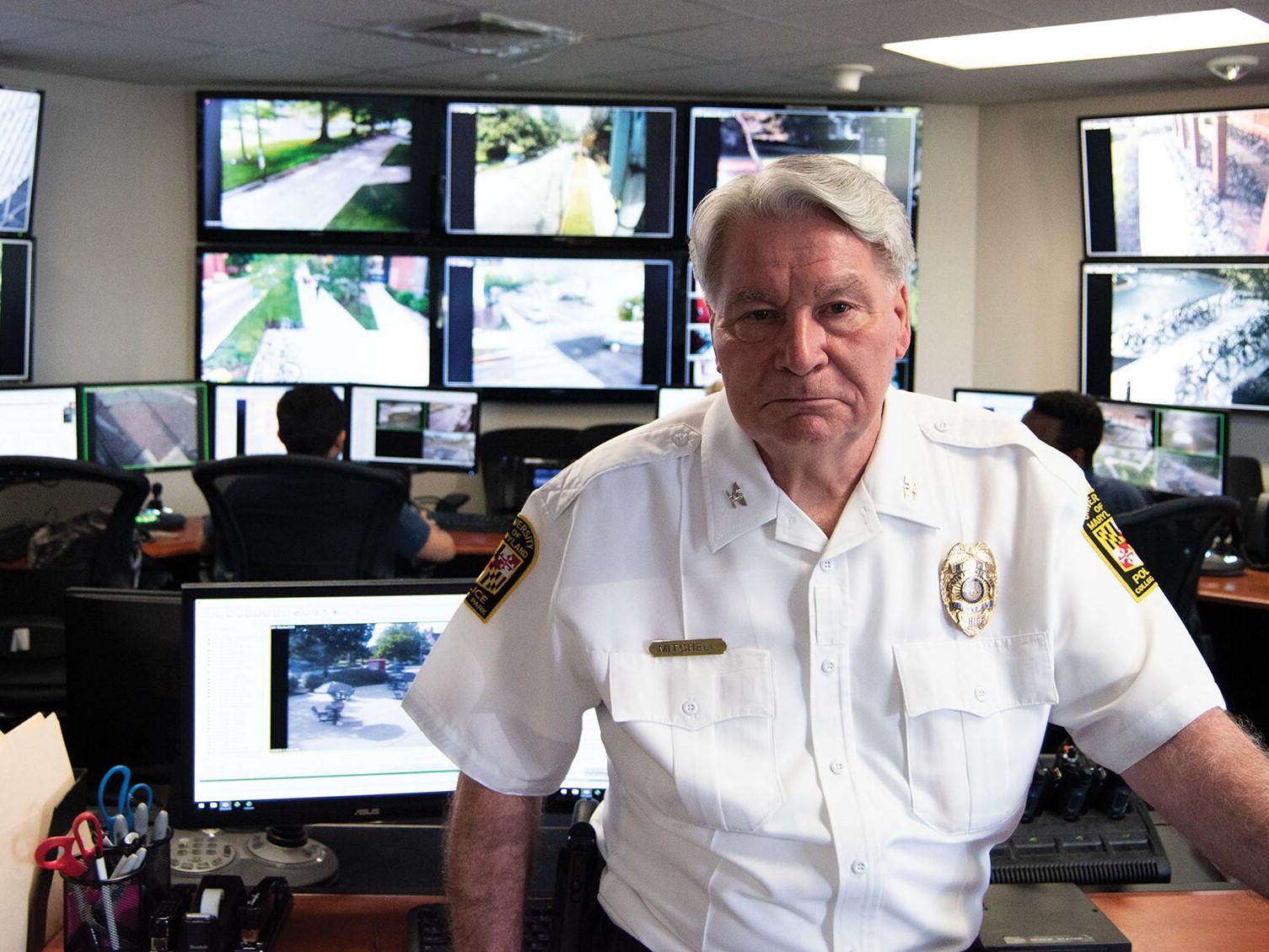 In a safety video produced by the University of Maryland last fall, shots ring out through Knight Hall as a gunman — clad in a gray sweatshirt and dark aviator sunglasses — goes room-to-room.

While the scenario is only theatrical, officials say they’re still preparing for the worst.

“This is what keeps me up at night,” said University Police chief David Mitchell.

According to the FBI, there were 27 active shooter situations in 16 states in 2018, killing 85 people.

With two more school shootings in recent weeks — one on April 30 at the University of North Carolina’s Charlotte campus, which killed two students and wounded four others, and another on May 7 at a Colorado STEM school that killed one student and injured eight — the possibility of a shooting on this campus is one officials won’t dismiss.

In working to address threats early, keep a close eye on other tragedies and implement state-of-the-art law enforcement tools and training, officials say they’re doing what they can to be prepared.

“Attempting to connect the dots”

Two years before the shootings at Virginia Tech in 2007 — in which 33 people were killed, including the gunman — this university established the Behavior Evaluation and Threat Assessment Team.

The team takes reports from faculty and staff, aiming to identify and support students who exhibit concerning behaviors — whether it be not showing up for class, a drop in their performance or a substantial change in their attitude.

Students who seem to be struggling with mental health issues, for example, are often referred to the Counseling Center, and those who make threatening statements or talk about using weapons or violence are referred to University Police.

“We encourage more interaction, not less,” said John Zacker, chair of the seven-member team and the university’s assistant student affairs vice president. “The worst thing that we can do is to isolate individuals who are acting in a manner that causes others concern, and to not reach out and talk with them.”

Zacker said the program — which is made up of officials from across the campus — relies mostly on faculty members to observe concerning behavior with students. The team often works to identify patterns in the reports it receives about an individual student, he added. If he hears multiple stories about a single student, he said, the level of concern rises.

“Part of our job is, in essence, attempting to connect the dots,” he said.

From July 2017 through June 2018, the team received and documented 185 cases of students of concern, according to data provided by Zacker. While these are mostly “less-serious” concerns, he said, they represent an 85 percent increase in the number of cases from the same fiscal period in 2014.

Although Zacker didn’t know why the numbers were increasing, he said increased knowledge of gun violence could play a role.

“We certainly see a spike in reports after an incident of violence — particularly in a college or university — and people’s awareness spikes at that point,” he said.

Ted Pickett, interim associate director of the Counseling Center, said current wait times for an intake appointment in the center range from same day to two weeks. The wait for a subsequent appointment could be longer.

But Pickett said a student identified by the BETA Team could be pushed to the front of the line to be seen, depending on the urgency.

In addition, University Police are using new legislation to help prevent acts of violence before they happen.

The state’s Extreme Risk Protective Order — a temporary court-issued civil order which requires a person surrender any firearms and ammunition and prevents them from purchasing new ones — took effect Oct. 1. Often known as “red flag laws,” the orders aim to keep guns out of the hands of people who seem at risk of hurting themselves or others.

University Police made use of one in February, when the department received a call from a father who said his son was having difficulties and texted him a picture of a rifle, Mitchell said.

Police applied for and received an ERPO against the son, who was not affiliated with this university at the time. They didn’t find a gun on him — and the order would have prevented him from purchasing one if he had wanted to — but they did determine that he needed an immediate psychiatric evaluation, Mitchell said. He was taken to the hospital.

Mitchell said the legislation could prevent other potential shooters from having access to firearms during a difficult time.

“They’re not necessarily bad people before they do it,” he said. “[They] make a bad choice on how to handle a situation, and they take lives.”

University Police continue to learn from mass shootings across the country — and implement lessons from many into their work.

The 1999 shooting killed 15 people at a Colorado high school, including the gunmen. While the average active shooter situation lasts about 12 minutes, Mitchell said, the Columbine shooting lasted more than 40.

After the Virginia Tech shooting — in which the gunman chained doors shut to keep people from entering and exiting — the department equipped every vehicle with large bolt cutters and “go bags” with smaller bolt cutters, duct tape, rope, medical supplies and tourniquets.

Mitchell also said the department has several specially-trained rifle operators dispersed throughout every shift who can assist in the event of an active shooter situation.

And about three years ago, University Police began using ShotSpotter gunshot detection sensors — the first department in the Big Ten to do so, Mitchell said.

The sensors, located in certain open areas of the campus, can detect a gunshot and notify police in seconds as to the exact location, type of gun used and number of shots, Mitchell said. The department wants to expand it to the entire campus as well as inside buildings, he added, but cost is an issue.

The department also continually monitors about 400 cameras around the campus and the city from its Security Operations Center and can tap into more than 1,000 at any time.

From the Oct. 1, 2017 shooting in Las Vegas, Nevada — which killed 59 people and wounded hundreds — Mitchell said law enforcement learned it needed to prepare for high-angle threats.

He conducted security surveys of the buildings that overlook Maryland Stadium, and found access to the rooftops were not as secure as they should be — a problem the department fixed, he said.

The department now monitors rooftops throughout sporting events and has a rapid response team ready to go.

Tom Kapsidelis, a 1977 graduate of this university, was working for The Richmond Times-Dispatch during the Virginia Tech shooting.

Last month, Kapsidelis published a book called After Virginia Tech: Guns, Safety, and Healing in the Era of Mass Shootings. It’s an in-depth look at the events that led up to and followed the shooting, still the deadliest campus shooting in U.S. history.

“It’s important for people to realize that it’s not only one piece of legislation, or one reform, or one act that can make everyone safer. I think it has to be a number of things, all taken together,” Kapsidelis said. “All the people who are involved in safety on campuses [need] to be totally committed and communicating with one another.”

Based on his research on the Virginia Tech shooting, Kapsidelis said it sounds to him like the university is taking good steps toward preventing another tragedy.

But educators should be careful, he said, not to traumatize people in the process of making them aware.

“I think that kind of preparedness needs to be shown in a way that really gets people’s attention, that doesn’t make them scared, or doesn’t make them want to turn away because it’s an unpleasant topic,” he said. “I think they need to reach those people who might turn away from those types of stories.”

Mitchell said the most frequent question he receives from parents during orientation is asking how prepared the university is for an active shooter. He said it’s a fine line the university must walk — keeping the campus as safe as possible while trying not to encroach on privacy or freedoms.

“How safe do you want to be? Yeah, I can make it real safe,” Mitchell said. “But you know, how much freedom do you want? How much security do you want? Because sometimes, they’re at odds.”

Mitchell said that the department needs the help of faculty members to help educate the large student population about how to respond to an active shooter situation.

He plans to ask university President Wallace Loh to make it mandatory for teachers to show students the safety video on the first day of classes.

The issue is one that the department — like departments across the Big Ten — has been “wrestling with for years,” Mitchell said, and will continue to address.