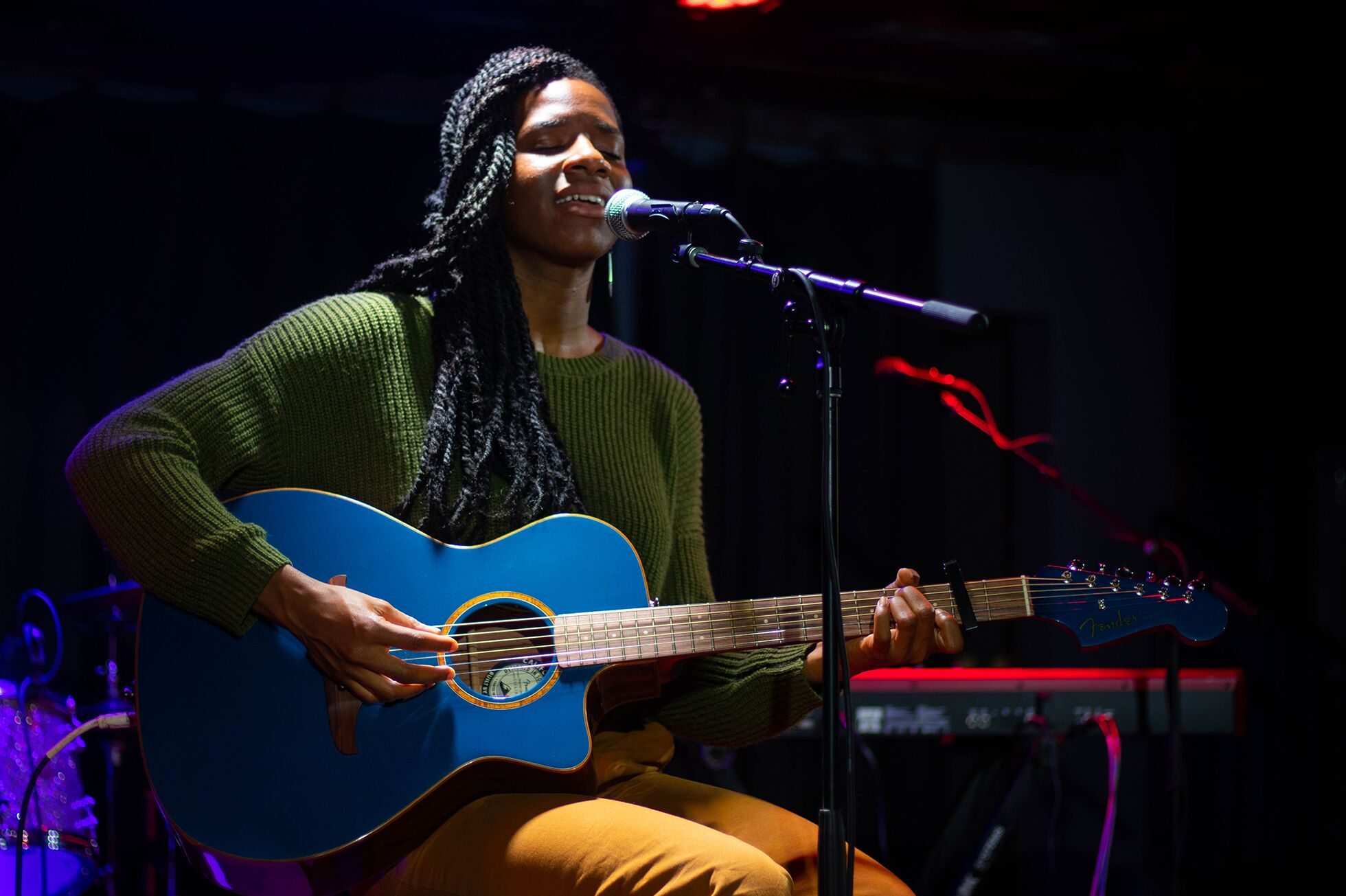 When I first met singer-songwriter Aisha Badru, she was sitting by herself at one of the side booths in the lower venue of MilkBoy ArtHouse. She was calm, soft-spoken and incredibly friendly as we spoke about her early life and musical career.

Badru visited College Park several times during her childhood, and had the opportunity to experience the true essence of the city before her performance.

“I think there’s this inspired energy,” Badru said. “People are still optimistic about the world and…it’s nice to be in a town where that energy is present.”

Badru opened for Allman Brown on May 10 at MilkBoy, and it was her first time performing in Maryland. In our interview before the concert, Badru confidently mentioned that she was not suffering from stage fright or any pre-show nerves.

“I really go off the energy of the crowd,” Badru said. “Every crowd is different. Some crowds will laugh and that will make you feel more relaxed when you feel like people are listening and connecting with what you’re saying.”

At approximately 8 p.m., the venue lights dimmed and Badru sat on a stool with her guitar at center stage. The crowd was small but listened intently as she spoke, and people nodded their heads to the beat as she sang.

Throughout her performance, Badru discussed her personal life and the evolution of her musical career. Writing music is a spiritual experience for her, she said, and her meaningful song lyrics capture the deep emotions she encountered in her life.

She spoke and sang about feeling isolated after her father disapproved of her decision to drop out of college and pursue music full-time. In another instance, she spoke about the heartbreak she suffered from a romantic relationship.

On more positive notes, Badru spoke about her first single, “Waiting Around,” being featured in a Volkswagen commercial. Recently, Freeform’s Shadowhunters featured Badru’s song, “Bridges,” which has over 1.1 million streams on Spotify. Badru mentioned that the reception to these singles helped propel her career and justify her decision to become a musician.

Listening to Badru open up about her struggles and accomplishments made her entire performance feel intimate and more genuine. Her performance highlighted what it truly means to be human.

Badru’s recent album focuses on her current healing process, which allows her to reflect on the most negative moments in her life and grow from those experiences.

She also emphasized the idea of making music that her fans can relate to. She encourages her listeners to join her in this healing process and hopes they are inspired and empowered after listening to her melancholy tunes.

“I’m learning that all of these low moments happen for a purpose,” Badru said, “they are there to teach us something.”