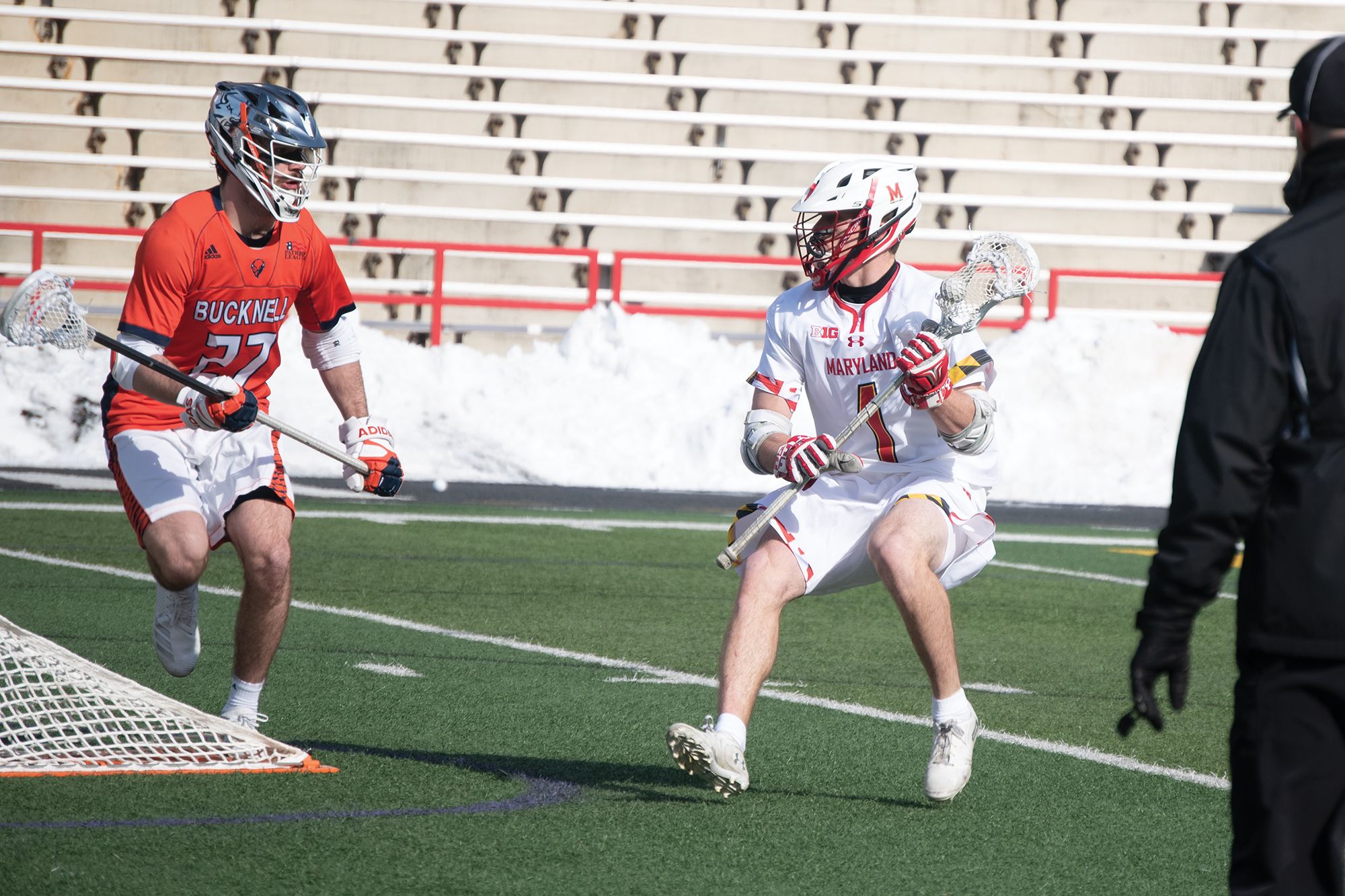 Attackman Jared Bernhardt brings the ball up from behind the goal during Maryland’s 11-6 win over Bucknell at Maryland Stadium on Feb. 2, 2019. (Joe Ryan/The Diamondback)

Donning the coveted No. 1 jersey this season for the Terps, Bernhardt has stepped into the role of the team’s top offensive option. He paces the team in goals with 45 and ranks second in assists with 25.

The junior is tied for 11th in the nation in goals per game, averaging a hat trick this season in 15 contests. His points per game average, 4.67, slots him at 13th in the NCAA.

Ament, a dynamic facilitator for the top-ranked Nittany Lions’ attack, has already set the NCAA record for assists in a season with 78. With those passing numbers and 23 goals, Ament eclipsed the 100 point mark and leads the country in points per game with 7.21.

Ierlan, a standout specialist, already holds the NCAA record for faceoff winning percentage in a season at 79.1 percent. After setting that mark last season at Albany, Ierlan has carried his success over to Yale as a transfer, posting a 77.2 percent clip to lead the country.

[Read more: With a Maryland flag in hand, men’s lacrosse is reminded of its state pride each game]

A player outside of attack or midfield positions has never won the men’s award, but Ierlan could end that trend.

Sowers, meanwhile is the catalyst for the Princeton attack. The junior ranks behind only Ament for assists per game, and is third in the country in points per game. With Princeton failing to make the NCAA tournament, Sowers’ season finishes at 37 goals and 53 assists.

Spencer was named a finalist for the third consecutive season, as he embarks on the end of an illustrious college career. The senior ranks fourth in the nation for points per game with 6.27, finding the back of the net 40 times and assisting on scores 54 times.

With Bernhardt’s nomination, Maryland has now had a finalist for the award three consecutive years. Last season, midfielder Connor Kelly represented the Terps in the final group of five, and in 2017, attackman Matt Rambo became the first Terp to win the award since its beginning in 2001.