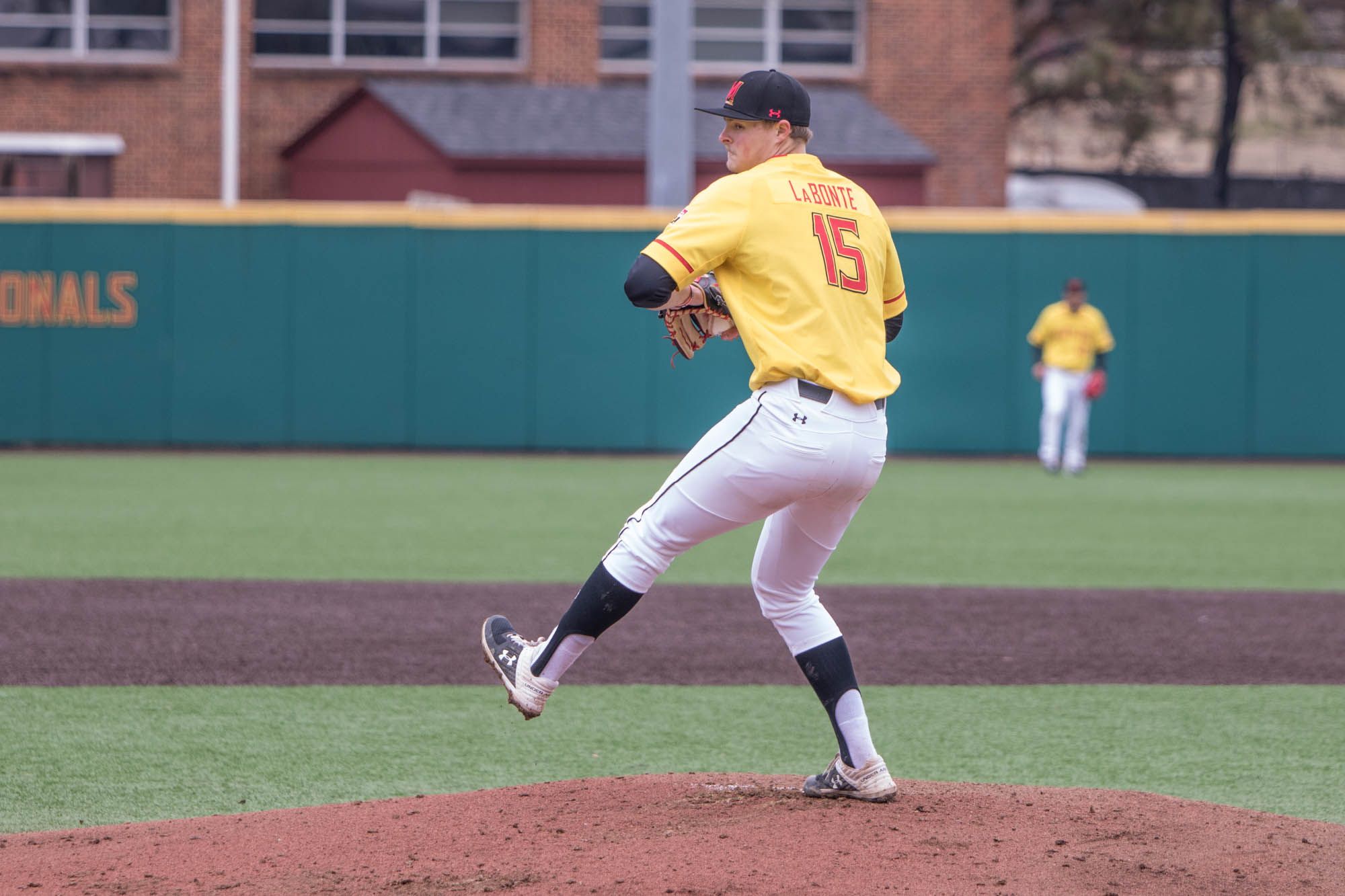 When Maryland baseball right-hander Trevor LaBonte walked to the mound at the start of the third inning against Michigan, the rain was just starting to pick up.

The weather had been subdued for much of the first two frames Sunday, and the Terps’ struggling freshman starter — LaBonte entered with an inflated 6.56 ERA — appeared to be on his way to a Big Ten-best start, giving up just one run on two hits before toeing the rubber in the third.

But whether it was the baseball’s slippery laces, a puddling mound or his mud-clogged spikes, LaBonte unravelled. He walked four Wolverines and plunked one more on the helmet, allowing three runs to cross and gifting the visitors all the runs they needed to secure the sweep, as Maryland fell 13-1 in another subpar outing from its pitching staff.

“It’s kind of really the story of the weekend,” coach Rob Vaughn said. “When you’re playing a team that’s leading your conference and is well-coached and has good arms and good tough players, you just can’t afford to allow guys to score without giving up hits.”

After dropping the first two games of the series, the Terps (23-25, 8-10 Big Ten) entered Sunday clinging to seventh place in the Big Ten standings. Since only eight squads qualify for the conference tournament, the final matchup still carried significance despite the series loss.

However, for the second year in a row against Michigan (34-11, 14-3), mother nature didn’t cooperate. A combination of blistering cold and a travel curfew shortened the two squads’ series finale in 2018, a 6-3 Maryland loss, as part of a weekend limited to two games. This time around, an on-and-off rain shower affected the outcome.

Before the weather took a turn for the worse, both teams traded runs on a solo homer by left fielder Jordan Nwogu and a seeing-eye RBI single from first baseman Maxwell Costes.

“We got some momentum going after that first inning,” Costes said.

When the rain picked up in the third, any momentum the Terps had quickly dissipated.

LaBonte missed the strike zone on 13 of the next 16 pitches, as the first five batters in the frame reached base without taking the bats off their shoulders. Coach Rob Vaughn made the call to the pen with his team trailing 3-1, one more would come home on a sacrifice fly one batter later, and then play was halted for a 45-minute rain delay.

“He just lost command of the zone,” Vaughn said. “And when that happens, it’s really tough against a good team.”

When play resumed, Michigan scored two more in the fifth and seven in the sixth to extend its edge. And though the conditions adversely affected the Terps’ staff, right-hander Jeff Criswell stayed the course. He gave up just one unearned run on three hits in five innings.

“He threw strikes and attacked the zone,” Costes said. “If you do that with good stuff like he has, it’s going to be hard to hit.”

Shortstop AJ Lee did extend his on-base streak to 23 games by forcing a free pass in the third, but baserunners were few and far between.

“Our at-bats in the first were awesome,” Vaughn said. “We competed with [Criswell] pretty good. But he’s good. He’s very, very good. That staff they have over there is very impressive.”

Maryland’s arms, meanwhile, surrendered 11 hits and walked 10 more, giving the Big Ten’s top squad one scoring opportunity after another. The Terps were swept after failing in nearly every phase of the rain-soaked matchup.