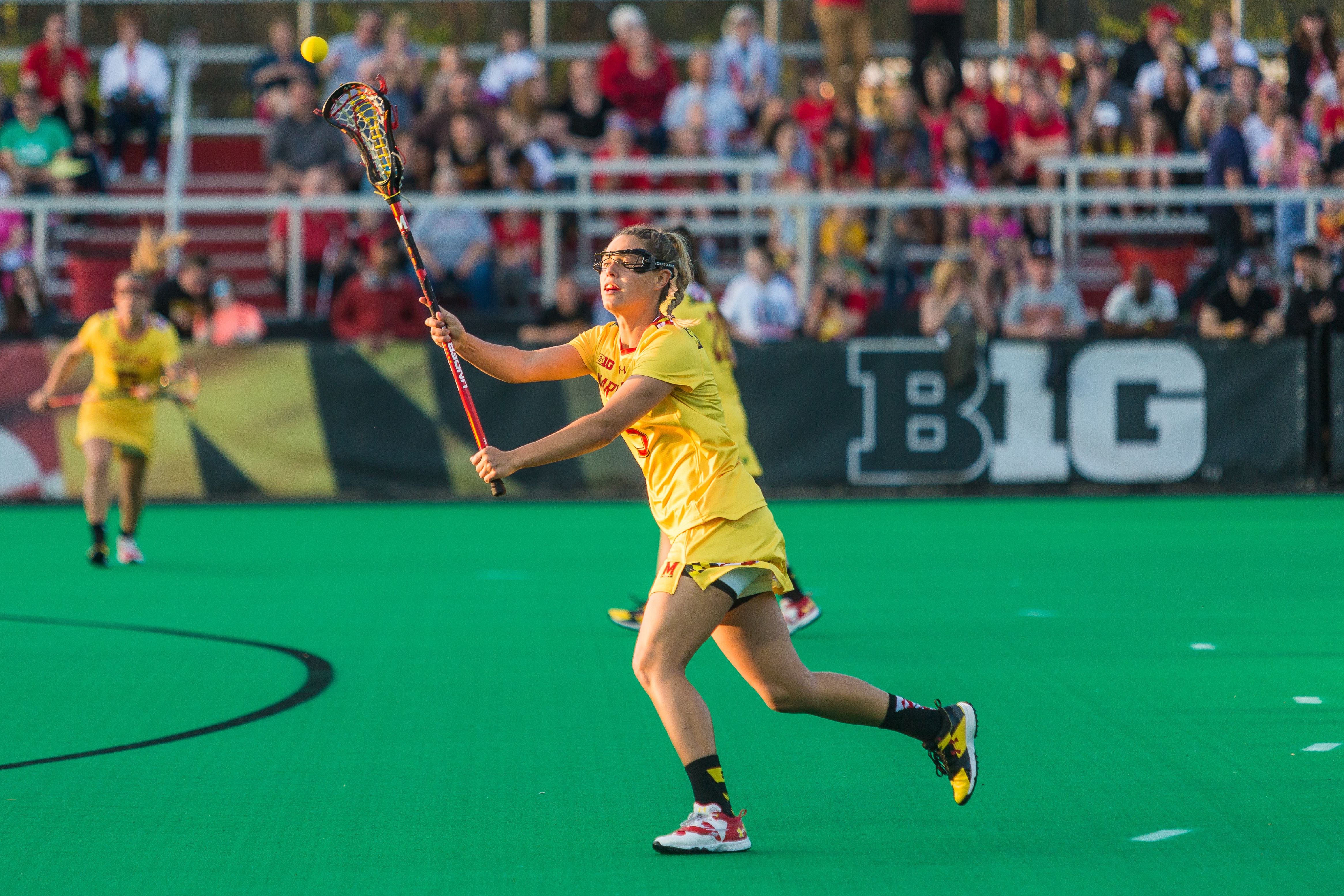 Midfielder Jen Giles passes the ball off to a teammate during Maryland’s 18-12 victory over Princeton at the Field Hockey and Lacrosse Complex on Apr 11, 2017. (Marquise McKine

Four minutes into the second half of Maryland women’s lacrosse’s Big Ten tournament semifinal against Penn State, midfielder Jen Giles still hadn’t found the back of the net. The senior, with 50 goals this season, faced double teams every time she gained possession, and saw three first-half shots saved.

But through a momentary lapse from the Nittany Lions, Giles saw an opening shortly after intermission. She drove hard to her left and slung a shot across her body, aiming for the bottom corner. However, the ball clanged off the base of the post and Giles turned away in frustration.

For the first time in 22 games spanning 364 days, Giles didn’t score. But it hardly mattered. In her stead, numerous other Terps stepped up, and Maryland spread the scoring en route to a 15-8 win over Penn State, booking a ticket to the conference tournament championship game.

“I’m proud of Jen,” coach Cathy Reese said. “Proud of her selflessness and her ability to keep moving the ball.”

Without its top scorer getting on the board, Maryland turned to other sources of attack. Midfielder Erica Evans continued her recent hot streak, tallying five first-half goals. Midfielder Grace Griffin scored three on four shots. Attacker Catie May provided two goals and two assists. Seven Terps got on the board, the most since April 6, to dispatch Penn State with ease.

On its first possession of the game, the Terps worked the ball around the arc before finding Evans on the edge of the crease for an easy finish. Giles didn’t touch the ball until the second possession, when goalkeeper Taylor Suplee kept out an attempt from the senior.

“Their goalie made some outstanding saves,” Reese said. “She played a great game.”

Evans tallied her second about a minute later, knifing through an open lane before firing home. Just after, Griffin found attacker Kali Hartshorn, who put the ball away for the Terps’ third goal in their first five shots.

And they continued to move the ball. With Giles constantly guarded tightly, Maryland was happy to keep feeding Evans. She found easy looks — both from free positions and on back-door cuts — that she calmly converted.

“I’m just starting to get comfortable,” Evans said. “Everyone’s so supportive around me and they know what I can do.”

Maryland even found offense from an unlikely source. Defender Lizzie Colson — holder of the Carroll County record for goals in a high school season but who hadn’t scored since 2017 — took a draw control, saw a lane and went for it, shooting low to extend the Maryland lead to five.

“That’s her second shot of the season,” Reese said. “She’s shooting 50 percent, which is great. We’ll take it.”

The Terps continued to tack on goals. Griffin scored two in the second half, finding openings near the cage to finish comfortably. An inch-perfect pass from attacker Brindi Griffin allowed attacker Caroline Steele to find the net after a scoreless first half. In total, they notched 15 scores against a physical Penn State defense in a strong offensive showing.

While Maryland wasn’t exactly the model of efficiency — converting on 35 percent of its shots — the team managed to overcome an off day from their main source of offense, and found a way to reach a fourth consecutive Big Ten tournament championship.

“That’s what we’ve been shooting for all season,” Reese said. “Any given day, you’re gonna see different names popping up.”

On Sunday, Maryland will meet Northwestern. In the other semifinal, the Wildcats dispatched Michigan 19-9. They won in emphatic fashion by shooting 50 percent. Attacker Selena Lasota, who leads the Big Ten with 70 goals, contributed five.

The last time Maryland and Northwestern met, the Terps needed a rescue mission to overcome an early three-goal deficit. Lasota scored six that day, and projects to be a handful once again for the Maryland defense.

The unit has looked a bit shakier in recent weeks. Although their goals allowed average is third-best in the nation, the Terps have been giving up some better looks. That will need to change against the Big Ten’s best scoring offense.

“We maybe got a little too comfortable,” Colson said. “Now we’re realizing every game could be our last.”

Should Giles return to form and Evans keep firing, Maryland will like its chances. And, if goalkeeper Megan Taylor can build on her 14-save performance while the defense limits Lasota, the Terps have a chance to lift another trophy Sunday afternoon.

“Any game can be our last,” Reese said. “We need to make sure we’re dialed in, we’re focused.”